Remember that romance? You thought you were deliriously happy -- until the next one came along and opened your eyes to how great love really could be. It’s easy enough to let lassitude and time combine to make you think things are better than they are. But sometimes you don’t realize how bad you have it until you’re rescued by something new and different. 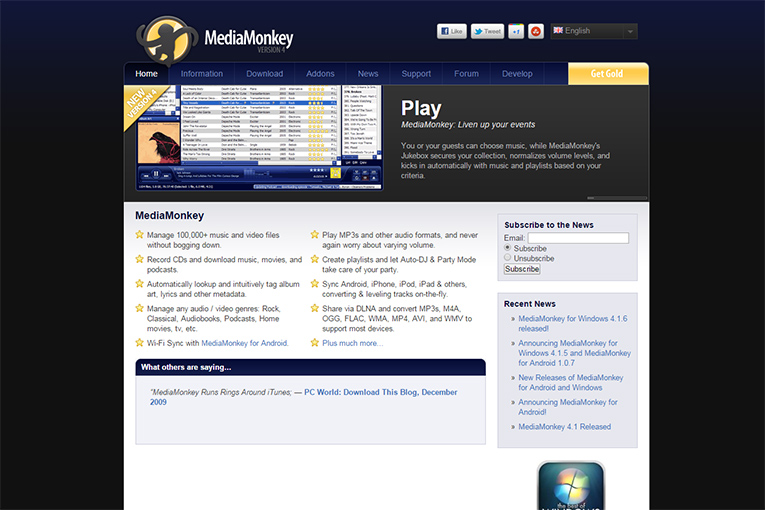 I’ve used a whole laundry list of computer-audio music softwares over the years, and thought many of them were real winners. The one that remained my favorite longest was MediaMonkey, an extremely well-integrated program that does a near-perfect job of everything it attempts. Plus, whenever a problem arose, there’s an intelligent and responsive user base waiting to help. Winamp (R.I.P.) provided some of MediaMonkey’s foundation, along with an extensive number of skins. Foobar2000 is an ideal solution for folks with enough knowledge and courage to do some minor programming. Exact Audio Copy offers clever ways to sift, sort, tag, and categorize music. iTunes lets you add swirly cover art at the top, and their Genius program provides occasionally intelligent recommendations. Windows Media Player is a joke. If it weren’t branded “Microsoft,” it would be considered malware intent on hijacking your music collection.

Anyone who’s serious, has a really large collection of files to manage (my 4TB hard drive is full), and the loot to cover the price of admission has had to consider one of three alternatives: JRiver Media Center, Amarra, or Sooloos. Each has its fans. My preference has been JRiver, primarily for the elegant simplicity of its interface with the best room-correction suites, such as Audiolense and Dirac Live. Together, Audiolense and JRiver cost less than $300 -- a pretty neat deal, all things considered. Still, something was missing.

My wife and I recently moved from a big house that had plenty of space to store my genuinely huge music collection, to a downtown loft with about one-fourth the square footage. We wanted the lifestyle change, and I love our new place -- but I had to dump 90% of my collection (at Amoeba Records, in Berkeley, and at Waterloo Records, in Austin). I was heartbroken over the loss.

Until I found Roon. Suddenly, I had 99% of my music back, and in a much more usable format.

Roon, from Roon Labs, is a media player. It costs $149 USD per year, or $499 for a lifetime membership. That may sound expensive, but a lot of work has gone into making Roon the prettiest, most useful music player you can buy for any price. It has a few significant problems that are being worked on and, I hope, will be fixed by the time you read this. But even with those problems, I foresee Roon as my standard media player for quite a while. 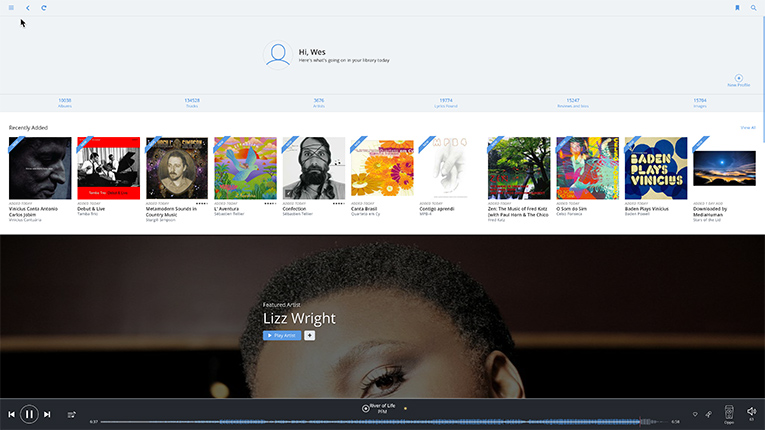 I’ve used the functional designs of all of the players mentioned above, and have found each of them to be just fine -- or so I thought. Until I met Roon, I never knew I’d been missing a huge, screen-filling presence with a gorgeous design. Anyone who’s grown used to LPs as a sound source will tell you that one of the great pleasures of dragging a diamond across a 12” slab of vinyl is the chance to peruse the jacket. On the front you’ll find a piece of art, on the back interesting information, and sometimes, on the inside, even the song lyrics. CD booklets try to include all of that, but the sheer size of an LP jacket -- it has more than six times the area of a CD booklet -- makes it more attractive. Especially since CDs also had the problem of designers who thought everyone could read four-point type printed in gray on black. Roon’s interface beats them all, even the LP.

If you buy Roon, you should also get a good ripper (I recommend dBpoweramp, for $39) and sign up with Tidal. This $20/month service is like Spotify, except for the fact that it streams at CD quality. Even more important, Tidal and Roon are so tightly coordinated that Tidal’s 30-million-plus songs appear to be coming straight from your own collection. The album covers come through at a size limited only by the size of your display, so you get the satisfaction of a large, LP-like image. If you search out an artist or composer, you get a nice image of him or her, a description from AllMusic, a list of upcoming concerts, the artist’s top tracks, all of the albums by that artist resident in your system and on Tidal, plus a collection of tags (about which, more later). 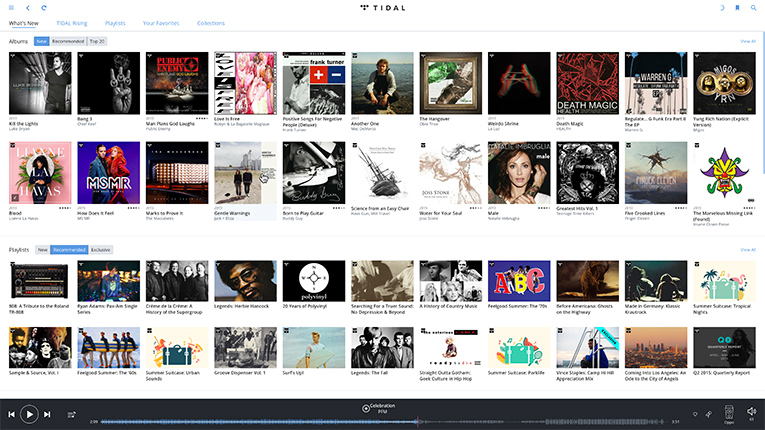 Roon Labs’ founders used to be with Sooloos, the best of the competition, before they sold Sooloos to Meridian. My curiosity about why the Roonsters would all just pick up and leave Sooloos Meridian led to an hour-long conversation with Rob Darling, Roon Labs’ chief strategist. For the last two decades, Darling’s full-time job has been as a recording engineer, working at such powerhouses as Giant Music (David Bowie, Sting) and the Hit Factory (The Fugees, NAS, Jay-Z, D’Angelo, Celine Dion). He and some friends were upset about the state of the art of storing, accessing, and listening to digital audio files, so they invented Sooloos. However, much of the Sooloos system ended up being about the hardware, which really wasn’t their area of interest. When Meridian offered to buy Sooloos, the principals took them up on it. Once the Sooloos system was well established as a Meridian product, the founders decided to amicably part with Meridian and start Roon.

Why move from Sooloos Meridian and the security of regular paychecks? Because what used to be a solution that required hardware can now be implemented with software alone. The market for desktop DACs has exploded -- today you can get superb sound for under $1000. Meridian is a fine company with plenty of high-end cachet, but not everyone wants to join their club. My conversation with Darling ranged from active speakers to wine to the state of rap, but Darling kept returning to a point that he considers of absolute importance: “Someday, I want everyone to experience the absolute purity and beauty of what a sound straight from the microphone to the monitors sounds like. People are so used to compression and EQ and reverb and all the other tricks of recording and mastering that most have forgotten what pure sound sounds like.”

I’m glad that someone who feels that way is in a management position at Roon Labs. It means that we have an ally there. Even better, Darling swears that his goal of sonic purity is shared by the entire company. 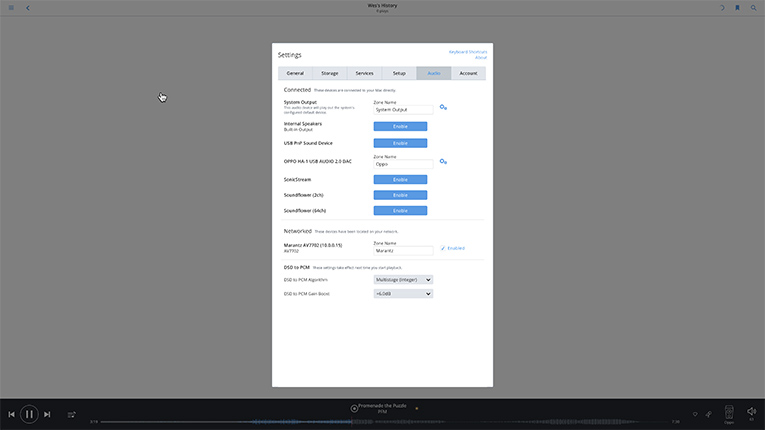 It showed. I compared Roon to what I had on my computer, which included Amarra Symphony, JRiver Media Center, and Apple Music. I listened as closely as possible, using Oppo Digital’s PM-1 planar-magnetic headphones driven by an iMac Retina 5K computer and Oppo’s HA-1 DAC-preamp-headphone amp. While Roon, like Amarra and JRiver, will work with room-correction systems such as Dirac Live, I didn’t have time to set them up together. I stuck with cans.

Marc J. Aubort and the late Joanna Nickrenz (1936-2002) comprised one of the finest production teams who ever recorded classical music. Their recording of Abbey Simon performing Ravel’s complete music for solo piano (Vox 5103) is clean and percussive, with a gorgeous and completely coherent soundstage. I’d ripped it to a 320kbps MP3 file using dBpoweramp. Through all of my media players, the sound was just as it should be. If asked to pick which player was which, I don’t think I could have done a better job than a random generator -- they all sounded great.

Ditto for the new Dr. Chesky Presents You’re Surrounded: The World’s First Binaural Surround Album for Headphones (24-bit/192kHz AIFF, Chesky/HDtracks). It will remind our older readers of the introduction of stereo and all those Ping-Pong stereo LPs that were released to demonstrate the glories of two-channel sound. Tracks 11 and 12 are especially remarkable for demonstrating the abilities of a good binaural recording. With this, too, all three players sounded great. I think Roon was just a tiny bit better at soundstaging, but again, I’m not sure I could have picked it out in a blind test.

Most of Roon’s abilities are available elsewhere, though not in a single package -- and none of those is half as beautiful. The reasons I’ll be going with Roon are visual and intellectual. As I said before, it’s visually flat-out awesome. But the clever way it uses tags to generate musical associations can ease your discovery of almost endless new connections within and startling facts about your music collection. 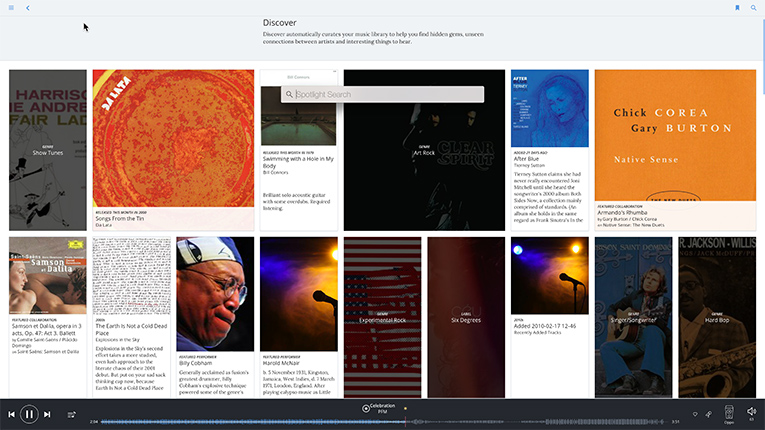 I looked up Nick Drake. Roon told me where and when he was born and died, his parents’ names, and offered links to the Wikipedia entry and the official Nick Drake website. Just above were six tags. British Folk led me to a gaggle of artists, from John Martyn to the Incredible String Band, but it also reminded me that it had been years since I listened to Fotheringay. Clicking on the Baroque Pop tag took me to the Left Banke, and made me wonder if Michael Brown had ever done anything else . . . which directed me to his next group, Montage, and their sole, eponymous album, which I hadn’t listened to for a decade. I’d completely forgotten what a little masterpiece their song “Desiree” is. Then I tried the AM-Pop tag and found an album by the brilliant songwriter Dan Penn that I’d never listened to. Because I’d learned the hard way to keep my Queue empty (explained below), when “Desiree” ended, Roon defaulted to its radio program, which is always based on the previous song. It picked a song I was sure I’d heard before but didn’t remember: the Association’s “Under Branches.” What amazing vocals! I’ll have to spend some time listening to them again. Then came the Zombies singing “Brief Candles.” Now I’ll have to go back and listen to Odessey and Oracle again. Soon. Thanks to Roon.

You get the idea. It’s endless.

There were problems. I have about 100 playlists stored as M3U files. Roon can’t read them. And I miss the functionality of having broad abilities to automate the editing of tags. For instance, sometimes I want to resequence a set of tracks, then renumber them and have that information written to the tags. Then there was the occasional awkwardness caused by unpredicted transitions. For example, say I want to listen to the first movement of the 23rd Violin Concerto of Giovanni Battista Viotti (1755-1824) (CD, Naxos 8.553861). But at the end of that thrilling Allegro, Roon doesn’t go on to the second movement. Instead, it checks my Queue, and if there’s anything in it, it goes to that. Now, I don’t religiously follow the Queue, so I don’t always know what’s next. Plus, my free-ranging interests rapidly change. This time, the next track up was “Hellraiser,” from Ozzy Osbourne’s No More Tears (Columbia/Legacy ZK 46795). From the Viotti to this was a jolting change -- especially through headphones.

So Roon isn’t perfect -- yet. It’s kind of like meeting Emilia Clarke or Kit Harington when she or he was 18: already unbelievable, but will probably continue to improve with age. The best news is that Roon Labs’ owners have ears, and seem to care about getting things right. I predict a long life for Roon, with lots of improvements along the way. I can’t think of a better way for those with really big collections of music to spend $499.