That plea said volumes, implying not only that this listener could never hear enough music by Eric Dolphy, but also that the reed player and flutist was not receiving sufficient attention.

That’s a common feeling among those who know Dolphy’s music -- whether in the context of his own recordings or in the service of music by Chico Hamilton, Charles Mingus, or John Coltrane. It rests in the fact that Dolphy recorded on his own just five times before his death at age 36 on June 29, 1964, the circumstances surrounding that untimely death, and the controversy that enveloped Dolphy’s music while he was alive.

The lack of attention may also have its roots in the fact that Dolphy was born in Los Angeles and didn’t follow the usual hardscrabble path of young, black jazz musicians. His parents were Panamanian and solidly middle class. Recognizing their son’s talent at an early age, they converted their garage into a practice studio and ensured he was tutored by the best teachers. At six, he was already playing clarinet in his primary school band. In high school, he studied oboe, saxophone, and flute. As a young man, he found work with LA bandleaders like drummer Roy Porter and trumpeter Gerald Wilson, but beyond the bebop that was in fashion on the bandstands of the day, he was also seeking out like-minded young musical pioneers like Ornette Coleman and Mingus.

Dolphy was drawn by bird song, by what he called the notes between the notes. Deviating from Western scales was not yet in vogue, nor was the polyphony that Dolphy pursued when improvising with other musicians. Like Coleman, who was ignored and shunned by other musicians during his formative years in California, Dolphy was treated as a misfit by many who heard him reaching beyond the expected. Famously, Miles Davis scoffed at Dolphy’s sound in a much-publicized DownBeat magazine article.

Eventually, he began to get the exposure he deserved, first with Hamilton’s popular quintet in 1958, and then with Mingus, after Dolphy moved to New York City. He reunited with Coleman and, most importantly, was championed by Coltrane, who took him on tour in 1961. In 1964, Dolphy rejoined Mingus for the most thoroughly documented segment of his career.

Between his sojourn with Coltrane and his return to Mingus, Dolphy recorded two important projects under his own leadership: Iron Man (1963) and the epochal Out to Lunch (1964). The latter, recorded for Blue Note in engineer Rudy Van Gelder’s famous studio with Freddie Hubbard, Bobby Hutcherson, Richard Davis, and Tony Williams, should’ve been Dolphy’s gateway to jazz stardom. But during a European tour with Mingus, Dolphy decided to stay on the continent in order to escape the racism endemic in the United States and to be with his fiancée, dancer Joyce Mordecai. Unbeknownst to him, he had developed diabetes, and while in Berlin he fell into a coma. Without knowledge of his condition, Dolphy was misdiagnosed at the hospital and never regained consciousness.

Dolphy’s unexpected death and largely unrealized potential led to a raft of unauthorized recordings of various qualities -- bookended by home recordings with Brown in 1954 and the so-called Last Date from June 2, 1964 (best known because it features young stars-to-be Misha Mengelberg and Han Bennink). Like Jimi Hendrix, Dolphy has not often been served well by what has been released. Despite that, his influence has spread broadly.

Dolphy’s posthumous treatment makes him an ideal subject for Zev Feldman, the relentless jazz sleuth who is now co-president of Resonance Records. Always on the watch for rare treasures, Feldman discovered in 2014 that James Newton, the renowned flutist and university professor, had a trove of Dolphy tapes. He received the recordings from the composer and educator Hale Smith and his wife, Juanita. Friends of Dolphy’s, they had been entrusted with his belongings when he left for Europe with Mingus.

Among the tapes were monaural masters of Iron Man and a second 1963 recording, Conversations. Although the original albums, recorded by Alan Douglas, were released in stereo, the masters of those have been lost. Making these even more valuable is the fact that the tapes included hours of unreleased material from the sessions.

“For the record,” writes Feldman in the 96-page notes that accompany both the three-CD and three-LP sets, “we’re not releasing every take . . . We only wanted to include the best of the best.” 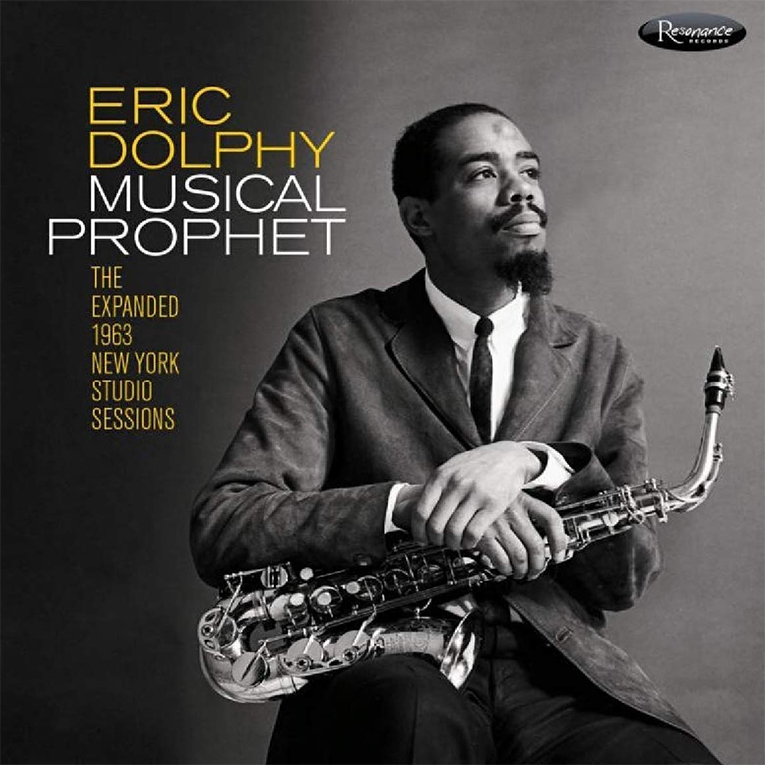 What is included amounts to 85 minutes of previously unheard 1963 studio music, the mono mixes of Iron Man and Conversations, as well as a curiosity known alternately as “A Personal Statement” and “Jim Crow.” Released in 1987 on Eric Dolphy -- Other Aspects, the 15-minute piece was written by keyboardist Bob James for a 1964 festival and recorded the following day at WUOM, a campus FM station in Ann Arbor, Michigan.

I enjoy the coincidence of it being recorded at a campus station, as well as the irony that it was composed by James, who made his name as a purveyor of so-called smooth jazz -- the antithesis of what my Dolphy-obsessed caller loved. “A Personal Statement” is anything but smooth, combining Dolphy’s excoriating alto saxophone, bass clarinet, and flute, and David Schwartz’s keening countertenor voice, along with bass (Ron Brooks), percussion (Robert Pozar), and piano (James). Primarily wordless, it is a bitter, adventurous howl against the plight of the downtrodden of the American South.

By comparison, the music recorded on July 1 and 3, 1963, stays well inside the musical boundaries of the day, albeit with a decidedly Coleman-tinged sound. Not only was the music Coleman introduced -- and Dolphy participated in -- on Free Jazz (1961) still resonating through the jazz world, but Dolphy adopted some of his friend’s influence for these sessions. Two of Coleman’s Fort Worth, Texas, schoolmates -- Charles Moffett and William “Prince” Lasha -- were onboard, along with Lasha’s frequent collaborator, saxophonist Huey “Sonny” Simmons. And for one track, “Burning Spear,” Dolphy utilized ten musicians, including both Richard Davis and Eddie Kahn on bass -- an obvious nod to Coleman’s lineup on Free Jazz. Rounding out the ensemble are saxophonist Clifford Jordan, bassoonist Garvin Bushell, vibist Hutcherson, drummer J.C. Moses, and trumpeter Woody Shaw, making his recording debut at just 18 years old.

Four songs -- “Alone Together,” “Come Sunday,” “Muses for Richard Davis” (both takes unreleased), and “Ode to Charlie Parker” -- are performed as duets between Dolphy and Davis. The resonance between Dolphy’s bass clarinet (has anyone ever played it better?) and Davis’s woody arco playing is especially gorgeous, setting up a strong, acerbic contrast with Dolphy’s flights into the upper range.

The quintet of Dolphy, Shaw, Hutcherson, Moses, and either Davis or Kahn recorded the leader’s “Iron Man” and “Mandrake,” and Fats Waller’s “Jitterbug Waltz.” In many respects, the group’s loose-limbed approach to the Waller standard set the model for how musicians like David Murray, Henry Threadgill, and Oliver Lake -- Dolphy devotees all -- would approach material like this a decade or two later. Damn the traditional notions of swing, they said; this is social music to be played as if in conversation with one another. The result is lively, compelling, and swings in its own sweet way. It’s no surprise that Douglas chose to call the posthumous album Iron Man when he finally released it in 1968. The title song is a calling card -- as revolutionary sounding as Charlie Parker was in the 1940s. Clearly, Dolphy heard harmony in a more advanced way than most of his contemporaries, and his lead lines hop and twist in unexpected ways. Trading solos, Shaw was obviously a force to watch, even while still in his teens.

For “Music Matador,” a composition by Lasha and Simmons, the band switched to Dolphy, Jordan, Davis, Moffett, and the composers. Hearing the alternate take for the first time, it’s evident how excited Feldman must’ve been to discover that this is no mere outtake; it’s fully realized, with exceptionally strong double-stop playing by Davis. That stated, the choice to put Lasha on flute, as opposed to the masterful Dolphy, diminishes the performance. The instrument sounds anemic up against bass clarinet, and alto and tenor saxophones.

Although it lacks the strong, unifying thematic material of Coleman’s Free Jazz ensemble piece, “Burning Spear” rumbles along with interwoven lines from the tentet. The alternative version is a bit shorter, and somewhat more restrained, leading one to believe that it may be an earlier take.

For true fans of Dolphy, three solo takes of “Love Me,” a ballad covered by both Frank Sinatra and Billy Eckstine, may be the sonic highlight of this set. They are ebullient, skittering, interval-leaping showcases for his playing, and they reveal his musical vision in spectral light.

All the music here has been carefully restored and enhanced by Resonance founder George Klabin and engineer Fran Gala, and while the mono sound is a bit flat, everything sounds clear and well balanced. Resonance has also outdone itself with the packaging and documenting here. The essays by Newton and music scholar Robin D.G. Kelley are particularly enlightening, as are some frank comments by saxophonists Murray, Lake, and Steve Coleman.

If you’re the kind of person who randomly encourages radio stations to “play Dolphy,” this is essential listening.