Running counter to the prevailing, aggressive style of Freddie Hubbard, Woody Shaw, or Clifford Brown, Wheeler’s trumpet style was more akin to a ballet dancer. Lithe and supple, his horn voice leapt octaves, pirouetted, and threatened to fall, only to be caught by some harmonic device you never saw coming. His compositional signature was heavily romantic, bulwarked by unusually thick chords that were most fully realized when his work was arranged for large groups.

An intensely shy, droll man, Wheeler dismissed his romantic leanings by saying they were more melancholic than anything else. He once told a journalist that his daily routine was to have a spat with his wife and then sit down to compose.

Wheeler was a hard man to pin down. His dodge concerning his compositional inspirations was not unusual. Once, assuming that his love of pastoral settings was inspired by a love of rural settings, I asked him if he enjoyed life in busy London.

“Oh, I wouldn’t enjoy life in the country,” he responded. “I’d find myself walking down a road and have to engage some farmer in conversation about his dog. I’d rather be anonymous in the city.”

Of his time in the belly of the English avant-garde music movement of the mid-1960s -- when he created woolly music in the company of Evan Parker, John Stevens, Derek Bailey, and others -- he told me that playing free music made him feel good, but he wasn’t sure why. He professed that it was more therapeutic than artistically satisfying.

He was a man who always seemed to be running from something, only to find himself immersed in the same thing later on. The primary example is his escape from his native Canada in 1952. Born and raised near Toronto, Wheeler was headed toward a teaching career when he took a hard left turn and headed for England. Years later, he told me that he couldn’t face what he saw as a stultifying life in the classroom. The irony, of course, is that, following a fulsome musical career in the UK, he wound up back in Canada, influencing a generation of young musicians as co-leader of the jazz program at the Banff Centre for Arts and Creativity in the early ’80s.

His path to becoming an influential trumpeter -- and a respected, if underappreciated, composer -- appears seamless in retrospect. But before he signed to ECM Records (in 1975), he put in two decades playing gigs and recording with artists like Tubby Hayes and Tommy Whittle. It wasn’t until the ’60s that Wheeler landed more prestigious jobs with the likes of Johnny Dankworth, and began to stretch out at London’s Little Theatre Club as a member of the Spontaneous Music Ensemble. Finally, in 1971, he began to draw broader notice as a member of saxophonist Anthony Braxton’s quartet.

In the 23 years between Wheeler’s reverse emigration from Canada to the UK and his major label debut on Gnu High (ECM) with heavyweights Keith Jarrett, Dave Holland, and Jack DeJohnette, the trumpeter honed his own voice -- both as an instrumentalist and a songwriter. What most listeners “discovered” was a mature artist, an extraordinarily serious man in his mid-40s who had paid enormous dues.

That all of this happened to a shy Canadian expatriate living in England added to the inevitability that Wheeler would continue to fly under the radar. Two decades later, at an age when most major artists are settling into their senior years, Wheeler complained to me that promoters were still reluctant to book him unless he committed to appearing with higher-profile musicians like Holland or DeJohnette -- both of whom commanded large salaries and were booked months in advance. Apparently, his name alone just wasn’t sufficient.

So Wheeler became better known as an influencer than as a headliner in his own right. He seldom ventured onto the concert or festival circuit in the US, and when he appeared in his native Canada it was often under the auspices of another artist. Over the years, I saw him as the featured soloist with everyone from an obscure regional vibraphonist to an Italian opera singer.

Wheeler was one of many influences that trumpeter Ingrid Jensen consumed in her early years. While she can carve a muscular line like Hubbard or Shaw, Wheeler’s balletic moves and wispy voice have also become components of her highly distinctive sound.

Writing from her home on the Hudson River, north of New York City, Jensen told me: “What first drew me to Kenny’s trumpet playing was the broad spectrum of sonic landscapes that he created with his beautiful, breathy sound that expanded into his sometimes angst-filled reachings into the upper register of the instrument. Without sounding overblown or testosterone-filled, Kenny could cover the full range of the trumpet and speak volumes in relation to the harmony he was playing over, as well, leaving my ear wondering where the line between free and change playing was actually getting blurred.

“Kenny played without cliche or licks, and his constant focus on composition and counterpoint informed his endless flow of timeless improvising.”

While Wheeler augmented his standard voice by using a flugelhorn, Jensen has eschewed the large, darker-hued horn in favor of her own customized Monette horn and some finely tweaked electronics. What’s more, where Wheeler’s tone inevitably made his music sound like the lament of a wistful soul, Jensen expresses joy in everything she plays. Even when essaying the blues, her gracefully soaring passages make it seem that she’s seeing beyond the pain. At her core, she’s an optimist.

Seattle-based saxophonist Steve Treseler doesn’t have Jensen’s international reputation, but his roots with Wheeler also run deep. As a student at the New England Conservatory, he was influenced by Wheeler, along with George Russell and Lennie Tristano. He’s also worked closely with two other trumpeters who have incorporated elements of Wheeler’s playing into their own: Dave Douglas and Cuong Vu. 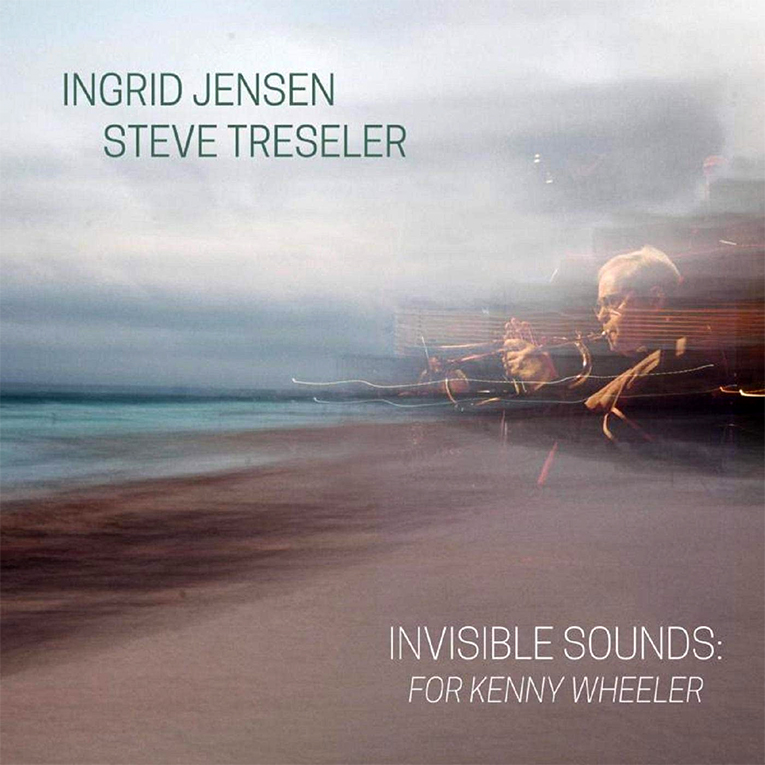 While both Jensen and Treseler obviously relate to Wheeler’s wounded romanticism, neither wants to be yoked to the composer’s approach to his own music. Time and again throughout Invisible Sounds they show that they’re not afraid to take Wheeler’s music into rougher waters than he usually relished. Their first step was their recruitment of bandmates who have a strong track record of stepping outside the expected: pianist Geoffrey Keezer, drummer Jon Wikan, and German bassist Martin Wind. Vocalist Katie Jacobson contributes to two pieces, and Jensen’s sister -- the exceptional Montreal-based band leader Christine -- adds soprano saxophone to a spirited version of Wheeler’s “Foxy Trot,” a composition from Wheeler’s 1983 album Double, Double You.

“Duet” is just that, a spiralling pas de deux with contrasting textures, which leads directly into a thorny interpretation of “Everybody’s Song but My Own,” from Wheeler’s 1988 recording Flutter By, Butterfly. With Wind driving a loping tempo hard, Treseler soars through a twisting solo filled with nuance.

When Jacobson joins, it’s to add wordless vocals in the same way that Wheeler employed Norma Winstone in the collaborative trio, Azimuth. The medley of “Gentle Piece” and “Old Ballad” goes to the soul of Wheeler’s most sensitive writing, and is an ideal vehicle for Jensen’s deeply burnished tone.

Supplementing the eight studio tracks are two performances from Seattle’s Royal Room, recorded by the core quintet for NPR in the wake of Wheeler’s death. The room sound is lively enough that you can hear Jensen exhorting her bandmates, and that combines with the energy the band brings to “Old Time” and a reprise of “Foxy Trot” to result in something that approaches one of Blue Note’s club recordings from the peak of the hard bop era.

While many jazz tribute recordings sound overly conceived, this one is clearly straight from the heart.