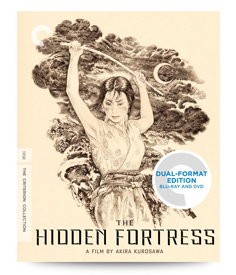 The Hidden Fortress is one of director Akira Kurosawa's most accessible gems. In 1958 it put him back in favor with Japanese audiences and grossed quite a bit of money, but it became popular in the West only when George Lucas identified it as one of his inspirations for Star Wars. Renewed familiarity with the black-and-white classic uncovers an excellent action-adventure movie that was practically a textbook on the use of widescreen and anamorphic lenses.

The film is set in 16th-century Japan during the feudal wars that tore the country apart. An odd quartet of characters endeavor to return home by travelling through enemy lines. Two of them, Tahei (Minoru Chiaki) and Matashichi (Kamatari Fujiwara), are a buffo comic duo -- friends when they have no money, but greedy adversaries at the sight of gold. There's plenty of that in the plot, so the two squabble and try to cheat and outwit each other for most of the movie's 139-minute duration.

The other two main characters are Princess Yuki (Misa Uehara) and General Rokurota Makabe (Toshiro Mifune), a samurai warrior. They are portrayed in the style of Japanese Noh theater, their eyebrows heavily enhanced and their expressions often that of a Noh mask. Rokurota is the action hero of the movie, but the Princess is also feisty and steals many scenes as she flips her riding crop in anger.

Though the peasants certainly remind one of the two bickering droids in Star Wars, The Hidden Fortress reminds me more of an American western transposed to Japan. And if it wasn't already obvious, the extras tell us that American director John Ford was one of Kurosawa's heroes, and scenes from his western epics inspired scenes in The Hidden Fortress. For one, most of the locales are unforgiving dust-laden prairies, broken once in a while by skimpy forests and pools of water. You can almost feel the heat. For another, there are horses and a stirring scene where the magnificent Toshiro Mifune pursues several horsemen with his raised sword held in both hands. In a Ford western it would be a revolver, but the overall effect is the same.

The Hidden Fortress was Kurosawa's first widescreen (TohoScope) movie, but he handled the new format so professionally that this is hard to believe. Kurosawa strove for interesting depth-of-field effects that would make background and foreground equally focused, or would make the characters in the foreground seem to leap out of and away from the background. And there is much more, all discussed in film historian Stephen Prince's masterful commentary, which is one of the best and most enjoyable I have encountered. This narrative is screen-specific but manages to work in a wealth of detail relating to Kurosawa in general, as well as information on The Hidden Fortress.

The many depth-of-field scenes exhibit why the Blu-ray is much preferable to the DVD (both are included in Criterion's dual-format edition). On the Blu-ray, many scenes show a sharp foreground and background in the same instant. Even with good upconversion from my Oppo player, the DVD can only hint at this. The Blu-ray also carries a choice of soundtracks: an original uncompressed mono track or simulated stereo tracks presented in DTS-HD Master Audio. I liked them both. The newly created subtitles make sense and are easy to read.

In addition to the commentary track, the Criterion edition of The Hidden Fortress includes a fascinating documentary from 2003 on the film's creation, Akira Kurosawa: It Is Wonderful to Create, as well as a short discussion with George Lucas and a not-restored trailer.

The Hidden Fortress is an action-adventure gem that everyone should enjoy, whether a fan of foreign cinema or not. The peasant characters are really funny, and the horse-and-lance play is really stirring.

Be sure to watch for: Chapter 16 takes our four characters to a brothel, and it alternates scenes with a street scene outside, where foreground and background characters are equally discernible and equally active. These are rich and complicated scenes made possible by Kurosawa's complete understanding of the anamorphic film process.