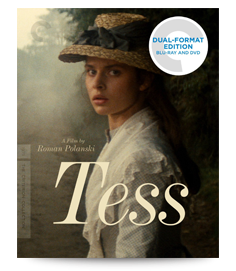 A Sweeping Romance with a Charismatic Star

The later 1970s seem to have been just the right time for epic film romances. Stanley Kubrick's Barry Lyndon in 1975, Terrence Malick's Days of Heaven in 1978, and Roman Polanski's Tess in 1979. All of the movies presented sweeping landscapes of the countryside in which they were filmed, but it was Polanski's movie that had the best plot and character development.

Tess is based on Thomas Hardy's Tess of the d’Urbervilles, which tells the story of Tess (Nastassja Kinski), a poor country girl who discovers that her family, though experiencing hard times, actually has aristocratic ancestry. She's sent to stay with a nouveau riche branch of the family, where she meets the dashing young Alec d’Urberville (Leigh Lawson), who seduces and rapes her, leaving her pregnant. After her child dies, she meets Angel Clare (Peter Firth), who marries her only to desert her when he finds out about her past. This Victorian era is definitely a man's world, for though Angel himself has a past, he disdains Tess when he finds out that she has skeletons in her closet as well. Tess gets back together with Alec, a contrite Angel reappears, and, as they say, trouble ensues.

Kinski celebrated her 18th birthday during the nine-month shoot for the movie. She was the perfect choice for Tess, radiating a glowing, youthful beauty underlined by a vulnerability that makes you want to protect her. Polanski explains in several of the extras that her face could be shot from any angle and still appear beautiful. Though Kinski has maintained an active career in front of the camera, nothing she has done has the magic of Tess. It's her greatest and most charismatic role.

Criterion's 4K digital transfer restores the picture to its full radiance. All of the period details are easily observed. Outdoor shots of gardens with roses and wheat fields provide texture that makes each scene seem at the same moment storybook and real. The original Dolby four-track master was painstakingly transferred to DTS-HD Master Audio 5.1. Whether the location is exterior or interior, you can easily understand the dialogue, and Philippe Sarde's sumptuously romantic, often aggressive music sounds better than ever.

The extras are above average and add immensely to the film. A period French 45-minute documentary shows Polanski at work, where you can observe his directing style while he is actually directing, not just talking about directing. "Once Upon a Time . . . Tess" is a 2005 documentary that shows how the movie was put together and discusses both what influenced it and what it influenced. Three short but intense documentaries feature interviews with cast and crew that are deeper than the usual back-patting ones that are normally served up.

Tess is a grand romance with superb character development. It moves at a leisurely and lyrical pace but never plods. Criterion has brought it vividly to life for those who loved it in the past as well as for those who have never seen it before.

Be sure to watch for: Near the end of the film, as Tess and Angel are fleeing the police, we encounter Stonehenge looking so realistic that it's hard to believe it was actually a set. Since Polanski could not film in England due to extradition laws, he filmed in France. The source for the sunrise at Stonehenge is revealed in one of the extras, and it might surprise you.