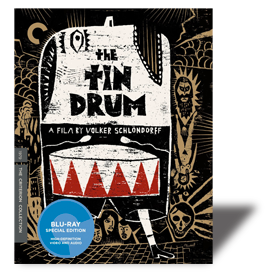 Made in 1979, The Tin Drum is a visually stunning film that will leave every viewer with images to remember, although it will probably be a different list for each person. Directed by Volker Schlöndorff, and based on the popular novel by Günter Grass, the movie tells the story of Oskar Matzerath, who decides at age three that he doesn't want to be an adult. To get his wish, he falls down a flight of stairs, and from that point on, with one exception, he never grows on the outside but matures inside until he becomes a 17-year-old boy in a child's body. And Oskar has a weapon to keep the adult world at bay: his scream breaks glass -- everything from spectacles to windows.

The film concentrates on the part of Oskar's life that parallels the origins and execution of World War II. The book takes Oskar another ten years into the future, but Volker felt, and Grass agreed, that the movie should end with the completion of the war. As far as that goes, the Nazis are largely portrayed as buffoons, though things do get serious when a Jewish toymaker (who has provided Oskar with one tin drum after another) commits suicide. Oskar comments that they thought Hitler was Santa Claus, but it turned out that he was only the gas man.

There's a lot of sex and nudity in the movie, as well as candid discussions about sex, and there is at least one scene that I found brilliant but almost repellent. Oskar's mother develops a taste for raw fish after an incident at the beach involving eels crawling from a horse's head, and the sight of her gulping down these slimy morsels, which eventually kill her, is quite disgusting and no doubt meant to be so. The Tin Drum is, in a way, a fairytale, but not one in which everyone lives happily ever after.

David Bennent is absolutely brilliant in the role of Oskar, both onscreen and through the all-important voice narration that ties the movie together. Bennent was suffering a growth issue at the time of casting and was a lucky find for the production team. He has remained in acting but currently seems devoted to stage productions. And according to one source, he has now grown to 5'3" tall. The rest of the cast is exceptional; there is no weak link.

Criterion has brilliantly brought this unusual fantasy/reality film to Blu-ray. Colors are rich and vibrant; complexions are varied and range from light to dark, just as they do in real life. Vistas have impressive detail, as do scenes of old-world buildings and streets, and dark scenes have excellent shadow detail. Who would have thought that a film more than 30 years old would look so good?

The 5.1 soundtrack, mixed from the original elements, mostly stays up front, but there are a few key scenes where the surrounds kick in and the music of soundtrack composer Maurice Jarre is panned to the sides and rear. The sound is clean and always effective, as are the English subtitles.

The extras here are all pertinent, though there are not as many as usual for Criterion. There is a rather lengthy interview with the director about the making of the film. Schlöndorff is an animated and informative review subject, and his remembrances greatly aid one's enjoyment of his movie. There are period interviews and television spots, and one of the scenes in the movie is shown while we hear Grass reading that same scene from his novel. The booklet accompanying the set contains an in-depth essay from critic Geoffrey Macnab and thoughts from Grass on the adaptation of his book.

The Tin Drum is a fascinating film that is very "cinematic" from beginning to end. This Criterion disc presents the director's cut, which in this case is mainly the reinsertion of scenes cut out to make the film fit the desires of producers. There are scenes in it that might offend, so a rental might be in order if you don't already know the movie. But by all means, everyone should see it. It's one of the great achievements in German cinema, and darned entertaining too.

Be sure to watch for: The Nazis come to town for a rally. Oskar and his drum are positioned under a microphone. The people are in serious Nazi stiff-armed salute when Oskar plays a 3/4 rhythm and gets the crowd dancing to a Strauss waltz. A storm approaches from the rear (a wonderful surround mix here), and the rain starts as the crowd disburses. A memorable scene.