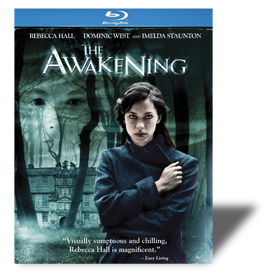 Extras can often heighten one's enjoyment of a Blu-ray's feature presentation, but they are usually self-congratulatory puff pieces. There are plenty of those here, as director Nick Murphy really likes to talk, even when he's just repeating what he's already said. But imagine my surprise to find a genuinely interesting special feature on this Blu-ray: a little piece called "A Time for Ghosts."

In this extra, cast members and specialists discuss the nature of England after World War I. At the beginning of the war, authorities decided against returning bodies to England, so almost a whole male generation was lost. Families couldn't grieve properly since there were no bodies, and there was no proof that they had fallen in combat. People pretty much took a stiff upper lip to the idea and moved on. But since the soldiers lived on in memory and had not appeared in the flesh, spiritualists had a heyday giving séance sessions where they would supposedly contact missing husbands, brothers, and fathers.

Charlatans ran most of these events, and it is just such a session that opens The Awakening as Florence Cathcart (Rebecca Hall) exposes a group of shysters pretending to speak to the dead. Florence is a ghost investigator bent on proving all such gatherings as false, though she herself is harboring a memory of a fiancé who was lost in the war.

Robert Mallory (Dominic West), a teacher at a boarding school for boys, visits Cathcart to ask her to look into their situation, which involves sightings of a child ghost and the death of one of the boys. From Cathcart's arrival to the improbable ending, the remainder of the movie relies on cliché, but it's still very well crafted and there are a few genuine scares. Hall is excellent in her role, close to going over the top but never actually doing it. West is a solid leading man, and Imelda Staunton is sturdy as the housekeeper and cook of the school.

Universal has brought this film to Blu-ray with reasonably good video and super-good audio. The picture is well contrasted and sharp enough to display the intricate carved details of the school's walls and the grain of its wooden floors. The audio is a winner all the way, with ghostly little sounds panned all around the room to give you a shiver now and then. The often-overwrought music by Daniel Pemberton sounds very good, though it's sometimes mixed in an overbearing manner.

Aside from the one original extra, the others are really self-serving. Murphy overexplains himself in the introductions to the deleted scenes, and his descriptions are far longer than the scenes themselves.

The Awakening is often derivative, but it's exceptionally well crafted and acted and will provide satisfactory entertainment as a Saturday-night rental. Maybe you should watch "A Time for Ghosts" first.

Be sure to watch for: Chapter 6 comprises a number of dark scenes as Cathcart sets up traps to capture the "ghost." Note the wonderful contrast and shadow detail.