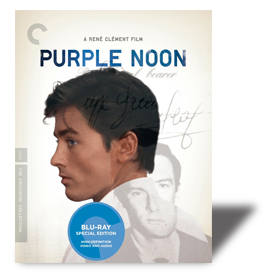 Purple Noon is based on a novel by Patricia Highsmith titled The Talented Mr. Ripley. If that sounds familiar, it might be because director Anthony Minghella made a film in 1999 based loosely on the same novel, with Matt Damon, Jude Law, and Gwyneth Paltrow in the leads.

Purple Noon (1960), directed by Réne Clément, stars a young, seductively handsome Alain Delon as Tom Ripley, with Maurice Ronet as Philippe Greenleaf and Marie Laforêt as Marge. Philippe's father has sent Tom to Europe to bring his rebellious son home to San Francisco. Tom is a jack-of-all-trades and a good imitator. As he visits Philippe and gets to know his girlfriend, Marge, he becomes drawn to their luxurious lifestyle and fancies himself as Philippe. A consummate opportunist, Tom is willing to sacrifice anything -- even his own identity -- to have Philippe's life.

Alain Delon was relatively unknown at the time, but he proved to be a lot more than just a pretty face by bringing great subtlety and insight to the role of Tom. Even when he doesn't have any dialogue, Alain's eyes speak volumes. And he pulls off the impossible by making the audience like a character who is a liar and cheat, perhaps even a psychopathic murderer.

The spectacular Mediterranean coast serves as the backdrop for this suspense story, and it looks as appealing as ever on this brilliant Criterion Blu-ray transfer. The frothy ocean is blue and inviting, the costume colors and textures are realistic, and the skin tones are perfect. Since the film is from 1960, there is a lot of grain, but it's troublesome in only the first four or five minutes. The sound is exceptionally bold for a monaural film. The dialogue is clear, and Nino Rota's colorful score makes quite an impact. If you need translations, Criterion's English subtitles are sharp as a tack and easy to read.

Extras include an "interview" (more like a lecture) with Clément scholar Denitza Bantcheva, as well as archival interviews with Alain Delon and Patricia Highsmith. The latter is especially well filmed and edited with extreme close-ups that make a stunning impression. There's also an English-dubbed trailer and an informative essay in the set's accompanying booklet by film scholar Geoffrey O'Brien, and it includes excerpts from a 1981 interview with Clément.

Though the homoeroticism is considerably toned down in Clément's film, it is still a better representation than Minghella's, as the French director layers on more suspense. Both movies rewrote the ending of Highsmith's novel; Minghella in a rather ludicrous manner. To Highsmith, Tom was too valuable a character to compromise, and he would be her lead character in four more novels.

Be sure to watch for: The scene on the yacht, after Tom and Philippe have their final confrontation, is very exciting, as the high waves and sound effects create a lot of tension and suspense. Oddly enough, this scene was mostly improvised, with the stormy seas and a large four-masted schooner on the horizon both coming up at just the right time without being planned.