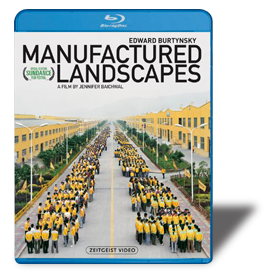 Zeitgeist Films has a solid reputation for releasing outstanding, obscure titles on DVD. The company has quite a few dramas, but its documentaries are where it really excels. Zeitgeist has just made the transition to Blu-ray, and Manufactured Landscapes is one of its first releases in that HD format.

Acclaimed Canadian filmmaker Jennifer Baichwal directed the 90-minute film, and it's a study of the photography of another honored Canadian, Edward Burtynsky. Burtynsky photographs scenes that would seem ugly -- mountains of tires, fields of discarded computer parts, construction on the largest dam in the world -- but his photography turns them into scenes of macabre beauty.

The film uses a minimum voiceover track, relying on images to state its case. The opening scene, for instance, features a walking-speed uninterrupted pan shot down the aisles of a Chinese assembly factory. This goes on for over eight minutes with no music, just factory sounds. Then the screen is swiped and replaced with Burtynsky's photograph of the interior of this plant, a shot that captures its immensity. We hear a lot here in the U.S. about manufacturing in China and American jobs being lost, but perhaps you never realized just how vast the Chinese manufacturing industry is. There are no preachy voices here; you might find these scenes beautiful, ugly, or something else -- the labeling is left up to the viewer. But I think that everyone who sees this plant will gasp at its size. After this shot, the lunch bell rings and the workers flood onto a street that separates buildings. This is also a scene of vast expanse. The Blu-ray's cover, reproduced here, will give you some idea.

Often the motion picture images morph seamlessly into the finished photograph, and this creates a curious and effective device, whereby the filmmaker shoots a detail and then draws back from it until it's only a small dot of the finished photograph. Burtynsky is shown filming from time to time, and we're given pieces of one of his lectures and a few other comments. But opinions are left open. The factory photograph might grace the wall of a corporate office as a tribute to the plant's productivity, or it could equally as well hang on the wall of an environmental bureau, bemoaning that such a plant even needs to be.

The transfer to Blu-ray seems true to the original film, and a lot of it is not very high definition. Many scenes are, however, and these are simply stunning. The sound is engaging, with some effective surround sound to aurally pin down a location. The extras include an interview with Baichwal and Burtynsky, some deleted and expanded scenes, an interview with cinematographer Peter Mettler, and a theatrical trailer.

We can be happy that Baichwal took to heart the old adage "a picture is worth a thousand words" by making a movie that stimulates the senses and allows us to make our own decisions.

Be sure to watch for: Chapter 10 starts out with Burtynsky's photo of the controversial Three Gorges Dam project on the Yangtze River (finished in 2012, six years after Baichwal's movie was released). HD detail is excellent here. At first you might think that the shot is CG, like something from a sci-fi film, but it is very real. The dam is the largest in the world, and it displaced 1.3 million people and is now considered an environmental disaster. But what an impressive shot!