"A Night to Remember" 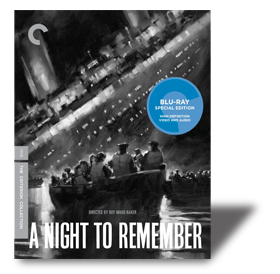 On April 15 of this year, we'll celebrate the 100th anniversary of the sinking of the ocean liner Titanic, a catastrophic event that claimed 1517 lives and changed the way we look at safety on the high seas. Leading up to the anniversary, several major events are planned. James Cameron will host a National Geographic show on April 8 that purports to be the final word on the event. Cameron assembled a prestigious team and invested many man-hours into the effort. At the same time, Cameron will re-release his Academy Award-winning film from 1997 in 3D. On April 14, the anniversary of the Titanic's collision with the iceberg, and April 15, the day it sank, ABC will air a new miniseries.

First at the gate, however, is Criterion's new Blu-ray of the black-and-white classic, A Night to Remember, which will hit stores on March 27. It was first theatrically released in 1958 and is perhaps the most accurate and least romantic telling of the story (of course Cameron's findings might change a lot of that). That's not to say, however, that this film has no feeling -- there are poignant vignettes that stick in the memory, such as a father kissing his sleeping son as he places him in a lifeboat, knowing he himself will stay behind to drown.

The commentary by Don Lynch and Ken Marschall (author and artist of Titanic: An Illustrated History) helpfully points out which parts of the film are accurate and which combine events or rely on supposition. Marschall is a member of Cameron's team, so it will be interesting to see if he has to refute himself once the National Geographic special has aired. It seems clear from his Criterion commentary, recorded in 1994, that he and Lynch felt that much careful research went into making A Night to Remember, and that most sets looked exactly like the real thing.

I personally find it amazing that such an accurate portrayal could be presented without the tools of today. The Titanic used in the movie is a huge model, over 30' long, and there are high-quality special effects. There were no digital assists back then. The acting is superb with a cast taken mostly from a British pool of character actors, but you'll be able to put names to a few faces, such as soon-to-be-Bond-girl Honor Blackman, and David McCallum, who still enjoys a busy professional career playing on today's hit show NCIS. Roy Ward Baker's direction is crisp and well paced, and though we all know the inevitable ending, he builds a keen sense of suspense throughout the film.

Criterion's black-and-white picture for A Night to Remember is about as good as it gets. The picture is sharp and clear, damage has been banished from the frame, and contrast is spot on. Shadow detail is excellent, which is important as so much of the story happens at night (the real event would have been more frightening, as it was a moonless night). The sound has been cleaned up and restored to a clean monaural track that's clear for dialogue and satisfactory for sound effects as well as William Alwyn's music score.

In addition to the excellent commentary, there's a 1993 documentary on making the film, a lengthy interview with survivor Eva Hart, a 1962 Swedish documentary commemorating the 50-year anniversary, and a fascinating BBC documentary (in color) on the iceberg's journey from birth to shipping lanes. There's also a handsome booklet with period art, photos, and an essay by Michael Sragow, a writer for the Baltimore Sun.

James Cameron's film, with its fictional love story, is sweeping and romantic, but I feel that A Night to Remember better conveys the actual event. It makes a wonderful impression in Criterion's stunning edition.

Be sure to watch for: The opening shot of chapter 24 is a close-up of the Titanic’s hull with lifeboats lowering and rowing away. Look for the great moving shadow on the bottom right of the frame and the detail in the ropes lowering the boats.