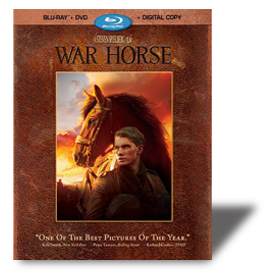 A Blockbuster Home-Theater Demo Disc for the Whole Family

War Horse started as a novel for young people by Michael Morpurgo. Nick Stafford then adapted the story for the stage, and we now have this sweeping, romantic film, directed by Steven Spielberg with a script by Lee Hall and Richard Curtis. With its sweeping vistas, large scope, and undiluted sentiment, it seems a tribute to John Ford, particularly the final scene.

As the movie opens we see a colt being born on a hillside in Devon, England. We are then introduced to Albert Narracott (Jeremy Irvine), who names the horse Joey and quickly bonds with him. Times get hard for the Narracotts, and as the World War I begins Joey is sold to the army. The handsome horse starts a journey that takes him to France and the middle of the war, then back to England again. Along the way Joey meets memorable characters who take care of him in their own ways. War is the villain in War Horse, as we're shown good and likable people on both the English and German sides.

The movie is adroitly cast with actors who seem to have lived in their parts as much as their well-worn costumes. Emily Watson is perhaps the best known, but many faces might look familiar. Contributing to the film's authentic feel is the fact that English actors play English characters and Germans play Germans.

The amazing photography of Janusz Kaminski finds its way to Blu-ray Disc looking quite impressive. The opening scenes of the English countryside are colorful in a travel-bureau way; the fields, moors, and quaint cottages and towns look like places you'd want to visit. When the British army gets to Europe, the colors become more muted, and for the grim scenes of battle they become cold, gray, and brown, with little relief. It's a variable setup that suits the action and works magnificently well in underscoring different moods.

The audio is flawless. The surrounds add a lot of atmosphere, and the dialogue is clean and easy to understand. Near the end of the movie there's a battle scene in "no man's land" that has incredibly loud and accurate gunfire, especially that of the howitzers. It was so real that I could imagine acrid gunpowder hanging heavy in the air. My cat took off to his secret hiding place, and that might be a warning to parents with young children. This is a family film, but the intensity of some scenes should be screened in advance. Teens should have no problems.

That hurdle overcome, War Horse proves to be a blockbuster home-theater demonstration title for the whole family. Its anti-war stance can provide good family discussion material, while its sweeping vistas and incredible sound mix will draw everyone in as the story races to a joyous conclusion that will leave your heart in your throat. Experiencing this wonder will have you asking, as I did, why Hollywood stopped making feel-good films like this one.

The four-disc set, which I reviewed, puts the Blu-ray movie on the first disc, the extras on a second Blu-ray disc, a DVD version of the film on the third, and a digital copy on the fourth. The extras pertain to the making of the film, and they're professional in every way. I especially enjoyed the one that shows John Williams conducting his magnificent score.

Be sure to watch for: Scene 11 opens with marching shadows as the camera tilts up to show the soldiers casting them. Spielberg does that often in this film, focusing first on what you might not expect to see and then revealing it as part of something you were expecting.