"To Catch a Thief" 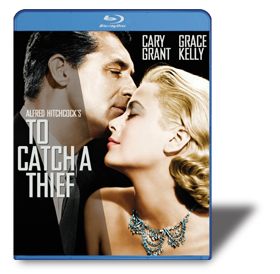 Cary Grant and Grace Kelly Sizzle on the French Riviera

During the 1950s, Alfred Hitchcock produced a cornucopia of classic films -- Strangers on a Train (1951), Dial M for Murder (1954), Rear Window (1954), The Man Who Knew Too Much (1956), Vertigo (1958), and North by Northwest (1959), with Psycho and The Birds still to come in the '60s. All of these films are critically acclaimed masterpieces, and smack dab in the middle of this prestigious collection is To Catch a Thief (1955). Though not as great as the others, the movie has its following, largely, I think, because of its two stars: Cary Grant and Grace Kelly.

Grant was coaxed out of self-imposed retirement to play John Robie, a reformed jewel thief who had been a hero for France in World War II and who's now a suspect in a rash of burglaries. Kelly was on her third (and as it turned out, her last) outing with Hitchcock, who had cast her twice before as his ideal blonde heroine. After Kelly went off to become Princess Grace of Monaco, Hitchcock would work with Doris Day, Janet Leigh, Kim Novak, Eva Marie Saint, and Tippi Hedren. They were all very good but never recreated the magic that Hitchcock found in Kelly.

Though Grant was nearly twice as old as Kelly, the two sizzle together in a debonair and elegant manner as a couple with instant chemistry. Since the censors were bent on making this film adhere to code standards, Hitchcock had his way by stuffing it full of sexual innuendos. A film made today will have more nudity and sex, but it will have to strain to be sexier than Grant, Kelly, and fireworks over the Mediterranean.

There are some fine character actors (such as Jessie Royce Landis and John Williams) in To Catch a Thief, but the third star, after Grant and Kelly, is the French Riviera, photographed with loving care by Robert Burks, who won an Oscar for his efforts. I remember this movie as one that justified the high-definition VistaVision process, and seeing the image on a 65" screen in an excellent Blu-ray transfer solidifies that impression. The sweeping outdoor photography is often breathtaking, and the loving close-ups of Kelly are just as impressive in a different way.

The first 20 minutes of this movie have given home video viewers fits because of the moiré patterns caused by Grant's shirt, with its closely spaced horizontal stripes. I'd like to be able to tell you the effect has been cleared up, but such is not the case. The distracting shimmer is still there, though not nearly as pronounced as in earlier VHS and DVD releases.

The sound is Dolby TrueHD in stereo, and it's clean and crisp. A great deal of the movie has no music and is devoted to the smart script by John Michael Hayes, so it's good that dialogue can be easily understood. There are quite a few extras, many of them featuring Hitchcock's daughter, Pat, who sheds light on the making of the movie as well as life at home with Hitchcock as a father. There are more featurettes, as well as a commentary with Hitchcock historian Dr. Drew Casper. My favorite is the 15-minute featurette on Edith Head, the greatest costume designer that Hollywood has ever known.

To Catch a Thief is not quite what you'd expect from "the master of suspense," but it's sassy and smart, always beautiful to look at, and worth seeing for Grant, Kelly, and the Riviera.

Be sure to watch for: Chapter 5 opens with a high-perspective long shot of a huge flower market. The leaves on the trees are clear, a lamp in the foreground is sharply delineated, and a background building, perhaps a quarter mile away, is also well defined. The colorful, postcard-perfect scene has a great sense of depth and is most impressive.