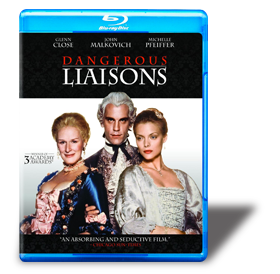 Returning to a film you haven't seen in 25 years can be interesting. Will you enjoy it as much as you once did? In my case, Dangerous Liaisons not only lived up to my expectations; it surpassed them. I remembered the somewhat glib surface, but I'd forgotten (or never noticed) the dark undertone of the script, which dissects the nature of cruelty.

Set in pre-revolutionary France, the movie is based on Christopher Hampton's play, which was in turn based on the novel Les Liaisons dangereuses by Choderlos de Laclos. We're introduced to the two main characters at the beginning of the movie when we see their elaborate daily dressing ritual. The Marquise Isabelle de Merteuil (Glenn Close) and Vicomte Sébastien de Valmont (John Malkovich) were once lovers but now bide their decadent time by destroying the relationships and lives of others. To them it is a game, but we soon learn that their actions are really more sinister and can produce unwarranted tragedy.

Close and Malkovich are ideal in their parts, savoring the delicious verbal barbs given to them, but there are many times when we need nothing more than a close-up of their faces to understand their characters. Michelle Pfeiffer is radiant as the virtuous Madame de Tourvel, who will not at first succumb to the Valmont's advances, and Uma Thurman, just starting in movies, is beguiling as Cécile, who not only gives in to Valmont’s instruction but also learns to enjoy seduction as a way to handle men.

The movie looks splendid in this Blu-ray transfer. Film fans will be happy to see grain and will note that Warner Brothers resisted the temptation to hone the picture with digital enhancement. The sharp detail in the costumes, wigs, lace, and embroidery doesn't need any help. The soundtrack is crisp and clear, involving mainly the front three channels, where dialogue is easy to understand. In the back you'll find only ambience for George Fenton's period-perfect music.

The only extras on this Blu-ray Disc are a trailer and commentary with director Stephen Frears and screenplay author Christopher Hampton. The latter is informative and surprisingly low key. Buy this Blu-ray not for the extras, but for the outstanding performances by Close and Malkovich and for the wickedly subtle script, all of which stand up to repeated viewings.

Be sure to watch for: There's one duel in the movie, but I won't tell you who wins in case you've never seen it. The fight takes place in the snow, and we see the loser from above with his attendant and opponent huddled around him. The flowing clothing is black, the snow is white, and the blood is red. It's an unforgettable scene, beautiful in its depiction of horror, like a death flower blooming in the snow.