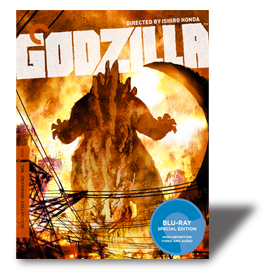 Godzilla! Mention of the name instantly conjures a huge dinosaur-like monster with bumpy dorsal fins and an overweight yet powerful physique. He's become one of the most iconic figures in pop culture, synonymous with Japan and with size. Any time someone wants to breathe a vision of gigantic into their product or service, they can merely add "zilla," and the connotation is clear.

Godzilla starred in around 28 features for Toho Studios. He has a star on the Hollywood Walk of Fame, and he's available as a plush doll in any Japanese gift shop worth its salt. After several sequels as a bad guy, he became a Japanese hero the people would call upon when another monster threatened. Godzilla would protect and fight for Japanese citizens in an almost endless number of Godzilla vs. movies. In 1962 he was even pitted against King Kong, one of the inspirations for his creation in the first place.

This handsome and downright enjoyable Criterion edition showcases the first 1954 black-and-white Godzilla, as well as its reworking into the 1956 English-language version, Godzilla, King of the Monsters! The latter jettisoned original scenes and replaced them with sequences starring Raymond Burr, who -- hold on to your hats -- was dating Natalie Wood at the time. This is explained, along with almost everything else you'd want to know about Godzilla and its stars, in a breathlessly energetic commentary by film historian David Kalat, who has made Toho and Godzilla studies his specialty. Kalat's commentary accompanies both the Japanese and American versions.

The overall tone of Criterion's edition strives to thoroughly examine the movie as a metaphor for Japan's fear of nearby H-bomb tests at Bikini Atoll in the early 1950s, the first intense era of the Cold War. Having survived two disastrous atomic bombs during World War II, the Japanese were nervous about any further nuclear experiences, and Godzilla gave them a fictional escape in a monster created by atomic- and hydrogen-bomb experiments. The American and Japanese versions handle this concept very differently from one another, and the factually rich commentary fully explains the differences.

Criterion's transfer looks great some of the time, and when it doesn't the fault lies with the original film stock or the fact that some scenes were spliced-in documentary footage, thanks mostly to Japan's coast guard. But it certainly looks better than I've ever seen it. The original Japanese movie gets the best run and is more devoid of print noise than the American one. The sound is mono, of course, but it's been sufficiently cleaned up and it's quite impressive at times. Godzilla's roar, sounding something like an elephant on steroids, is clear, as is Akira Ifukube's pulsing score, which was a groundbreaking soundtrack at the time and is still highly regarded among film music cognoscenti. The extras include a fascinating interview with Ifukube (he originally worked for the Japanese forestry service!), as well as other stars involved with the famous monster, including Haruo Nakajima, who donned the 200-plus-pound Godzilla suit to play the radioactive beast. There are still more featurettes, including one on the ironically named Lucky Dragon Number 5, a fishing vessel that got too close to the Bikini Island experiments, causing its crew to contract radiation sickness and forming the basis for the opening Godzilla scenes.

Godzilla was a groundbreaking movie in its day, so revered that it was dubbed, at extra expense, in an American version that made more money than any foreign film before it. The special effects look a little cheesy in spots (the blown away helicopter is definitely a toy), but that was the point when I first saw it in junior high. We kids had seen George Pal's War of the Worlds and other like-kind genre films that had amazing special effects, and we knew that Toho was using miniatures. But being young and blissfully unaware of the more serious message of the H-bomb subtext, we simply thought it was so cool that a director would build and destroy an entire miniature Tokyo. That cool factor remains, and whether you watch it for its message or just for fun, Godzilla still rocks.

Be sure to watch for: Chapter 4 starts at a fishing village as its denizens wonder why the fishing has been so bad. The detail and especially spot-on contrast are of much higher quality than you might expect from a monster flick.