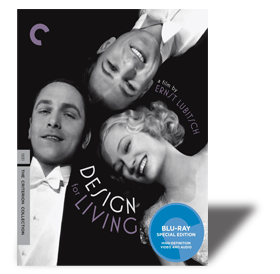 It's a fascinating journey to study censorship throughout the history of cinema. You're liable to find a few surprises, including Ernst Lubitsch's frothy Design for Living, made before stringent codes were placed on Hollywood films. Though it will probably just seem smart and sassy to contemporary viewers, the film broke a fistful of taboos back in 1933. For one, it announced that married people sleep in the same bed. There’s a scene in this film where a man and woman measure a bed in a showroom window and then measure their own chest widths to see if they'll fit. Contrast that with all the '40s and '50s movies where couples, no matter how much in love, slept in twin beds.

Then there's the issue of sex before marriage, which, despite lacking in nudity, Design for Living makes perfectly clear. And finally there's the biggest bomb of all: a ménage à trois! Lubitsch and screenwriter Ben Hecht made it all seem so comic and agreeable that you can scarcely find fault, but perhaps that was the problem with censors back in the '30s: they were alarmed that the unions in Design for Living, which flew in the face of commonly accepted social norms, were presented as perfectly normal.

At the beginning of the film, Gilda Farrell (Miriam Hopkins), an American commercial artist living in France, boards a train to find her two compartment mates, Tom Chambers (Fredric March) and George Curtis (Gary Cooper), asleep. Entranced by the two handsome men, she starts to sketch them. When they first wake up, they think she's French, and once it's out of the way that she isn't, both show that they think she's the most desirable woman in France or anywhere else. In order not to spoil the intricate plot for you, suffice it to say that Gilda cannot choose between Tom and George, as she loves them both. Near the end of the film she decides to go the straight and narrow way by marrying her ardent but dull boss, Max Plunkett (Edward Everett Horton), but her free spirit prevents it from working. Miriam Hopkins is all sugar and lots of spice as Gilda, and we can easily see why all the guys fall for her. If you've only seen Cooper in westerns, be prepared to see another highly successful facet to his acting. March's crackling intensity keeps things rolling when Hopkins isn't around, which fortunately is not very often.

Lubitsch used varied camera angles and distances to better tell the story (based loosely on a play by Noël Coward), and the video transfer shows these with good focus and contrast and a tolerable level of grain. The print itself has a few slightly damaged frames, and at a few points it goes a little soft, so it's not the best black-and-white release Criterion has ever done, but it's still top-drawer. The mono audio track has been restored, and it's perfectly adequate for all the pithy dialogue -- I didn't miss a word. There's very little else on the soundtrack, just a few random sound effects and some location music.

The extras offer a very good television production of Coward's original play, introduced by the author himself. Also included is a short but memorable vignette, directed by Lubitsch and starring Charles Laughton, that was part of a multi-director 1932 movie, If I Had a Million. You'll also find a screen-specific commentary from film scholar William Paul that dissects several scenes in this film as well as a few in Lubitsch's companion piece, Trouble in Paradise (1932). Other extras include a discussion with screenwriter Joseph McBride that examines Hecht's adaptation of Coward's play, and a booklet with an enthusiastic essay by film critic Kim Morgan, illustrated with wonderfully vivid black-and-white stills from the film.

Design for Living has no nudity or profanity, but it plays smartly as a romantic comedy with unapologetic sex at its core. It has traversed the years well, and it's still entertaining today thanks to its witty script, sure direction, and crackerjack performances.

Be sure to watch for: Chapter 4 is set in Tom and George's Paris apartment, which looks something like a modern set for La Bohème. After Gilda arrives, the three take turns flopping on a sofa bed that issues very detailed and realistic clouds of dust. Though the characters pay little attention, I have respiratory issues and I wanted to cough and sneeze. In other words, magnificent detail!