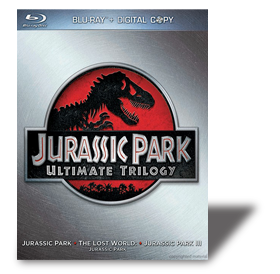 Dinosaurs have always fascinated us. They were a big part of my world as a kid, though at that time we could only see dino skeletons and drawings. In the movies they were usually just lizards with fins, and they seemed atrociously fake. There was Ray Harryhausen, who used stop-motion techniques to great effect, but as meticulous and time consuming as his work was, he couldn't be in charge of every B movie made.

Steven Spielberg no doubt experienced many of these bad movies while retaining his natural curiosity about the huge beasts that were, we're now told, wiped out of existence when a large meteor collided with the Earth. Spielberg wanted his dinosaurs to look real, and since CGI was just picking up in quality, it unlocked many opportunities to present dinosaurs as they lived in the wild. His team did a great job. The special effects in these movies still look impressive, and sometimes awesome, as in the first dinosaur sighting of the original movie.

The film finds a corporation about to open a dinosaur-based theme park on a far-flung island. Unlike other exhibits, this one is stocked with live dinosaurs courtesy of scientists who've figured out how to extract dino DNA and resurrect the extinct reptiles. Dedicated paleontologist Dr. Alan Grant (Sam Neill, who stars in the first and third films) urges caution, but others think might makes right and that they are the mighty. The dinosaurs quickly prove them wrong, causing catastrophic damage when every failsafe crashes and burns. The second and third movies take up the story but focus more on special effects than on character development. The action sequences are so good, however, that they get away with it.

Many viewers have trashed the transfers of Jurassic Park Ultimate Trilogy in reviews on Amazon.com, mainly with complaints of a grainy picture. But those criticisms simply aren't true: these fantasy-adventure movies look very fine on Blu-ray. I'd assume those unhappy viewers have their contrast or sharpness controls set too high. The original movie has its own great contrast and excellent shadow detail, and though the first sequel (The Lost World: Jurassic Park) doesn't quite measure up, the third installment (Jurassic Park III), often considered the worst of the movies, has a picture of demonstration caliber, sometimes displaying astonishing detail that adds perceptible depth to almost every scene. The soundtracks for all three movies are as good as it gets. Dialogue is clear and well placed within the sound design, and the surrounds are on most of the time (especially in Jurassic Park III), providing atmospheric sounds that really draw you into the picture. Of course, there are crunching dinosaur sounds that will give your entire sound system an exhaustive workout, including the subwoofer for those T. rex stomps.

The extras are plentiful and generally good. Commentaries, deleted scenes, production featurettes, behind-the-scenes shorts, and theatrical trailers all abound. This would be a good set to have on hand in case you become snowbound this winter, as it can provide hours, maybe days, of enjoyment while your local road crews are digging you out.

Jurassic Park Ultimate Trilogy lives up to its name on Blu-ray, providing three nights of first-rate entertainment followed by seemingly hours of extras perfect for a rainy or snowy day.

Be sure to watch for: There are hundreds of scenes in these three movies that you could pick as examples of Blu-ray excellence. Some of them are of quite ordinary events. Take chapter 5 of Jurassic Park III for instance. A small airplane sits on a runway that extends into the distance and is bordered on the right by a thick forest. A tattered windsock is in the foreground. There's shadow definition and detail at the bottom of the trees that holds solid into the distance, giving the picture a real feeling of depth. Even with good upsampling, a DVD cannot compare.