"Rise of the Planet of the Apes" 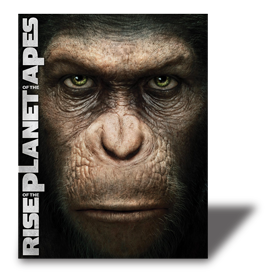 I was unable to see this latest reboot of the Planet of the Apes series in a theater and had heard so-so press about it. But after experiencing it in my home theater, I have nothing but praise. It's one of the best science-fiction/action films I've seen in a long time. The film is well cast and acted, it's paced just right, and it has state-of-the-art special effects that aid in telling the story rather than being mere eye candy.

Most readers will remember the 1968 movie Planet of the Apes, which found astronaut Charlton Heston going forward in time to discover an Earth ruled by apes that talked and behaved just like men. Rise of the Planet of the Apes takes us back to a time long before that to show how the apes started to transform and gain power. A young scientist, Will Rodman (James Franco) is desperate to cure his father (John Lithgow), who has Alzheimer's. Experimenting on apes, he isolates a virus that heightens the apes' intelligence. Will's chief chimpanzee, Bright Eyes, goes on a rampage and the research is ended, but Bright Eyes has just given birth to a baby chimp, Caesar (Andy Serkis), and Will takes him home. Will uses a variant of the virus on his father, who regains his memory but still succumbs to his disease. The virus appears to make apes smarter, but it can kill humans.

The rest of the film shows Caesar's increasing intelligence, his rise to leadership, and his marshalling of other apes to present a force that will challenge humans for control of the Earth. The special effects are stunning, and the filmmakers have brought motion capture to a new level. But it's actor Andy Serkis who brings Caesar to emotional life. Though his subtle expressions are fed through the motion-capture process, there's nothing mechanical about his performance. His interpretation of Caesar is what makes this movie so special; it's not unthinkable that he might be nominated for an Oscar. Serkis must be gymnast, stuntman, and actor at the same time, and he accomplishes all with seeming ease in a tour de force performance.

The picture is close to perfect with amazing detail that makes the computerized fur look absolutely real. Whether outdoors or inside, every shot resonates with true color and infallible contrast. The sound supports the picture all the way, with a sweeping, rhythmic score from Patrick Doyle, crisp and clear dialogue, and lots of atmospheric surround.

The extras are fun and enlightening, especially the one on Andy Serkis that shows how he looks in his motion-capture suit while playing Caesar. In fact, using spilt screen and actual shots from the movie, I learned more about motion capture from these the extras than from any others I've seen. Serkis retains his motion-capture suit for several deleted scenes, and there's a wonderful featurette on the music that shows how Patrick Doyle used a most unusual trick to create a dynamic rhythmic sequence. There are two commentary tracks, one from director Rupert Wyatt and one from producers/writers Rick Jaffa and Amanda Silver. Both are worth your time.

Rise of the Planet of the Apes isn't just another creature movie. It smacks of excellence in every sense and boasts an Oscar-worthy performance from Andy Serkis. The script is tight, the pace is just perfect, and the character development is deep and probing. The Blu-ray edition, which preserves every aspect of the film's quality, won't disappoint.

Be sure to watch for: One of the extras is called The Great Apes. It contains profiles of chimpanzees, gorillas, and orangutans and offers facts and observations that will deepen your understanding of our closest primate relatives.