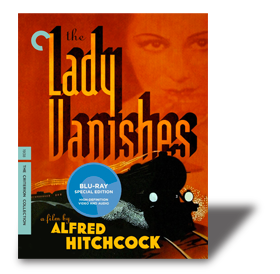 The Lady Vanishes is one of the last British movies Alfred Hitchcock made before moving to Hollywood, and it's considered to be among his best. Part espionage thriller and part romantic comedy, it's a feat that perhaps only Hitchcock could have pulled off. Like many classic films, it involves a train and its passengers, which is always a good formula. Those closed-off compartments (and baggage car) could be hiding anything.

The hidden element in this film is an elderly woman named Miss Froy (Dame May Whitty), who has mysteriously disappeared but must still be on the train. The last person to have seen her is Iris Henderson (Margaret Lockwood), a young woman traveling to England for her impending wedding. She convinces a dashing passenger named Gilbert (Michael Redgrave) to help her, and before you can yell "Look out!" the two are falling in love and getting involved in international skullduggery.

Hitchcock plans his scenes with economy and precision (the set was only 90 feet long!) and gets the most out of his talented cast. The comedy here isn't the roll-in-aisles sort, but if you're familiar with Hitchcock's droll, deliberately stiff introductions to his TV episodes you'll know what to expect. The two characters responsible for the most titters are bachelor-buddies Caldicott (Naunton Wayne) and Charters (Basil Radford), who hang the success of their lives on being able to get back to England for a special cricket tournament. The pair was so popular with audiences that Wayne and Radford appeared as the same characters in several additional movies, including Crook's Tour, which is included as an extra on this Blu-ray.

Criterion developed a new print for this movie a few years back for a DVD release, and this appears to be the same one. It gains depth from the greater definition that Blu-ray provides, and all those British tweeds look appropriately spiffy, as do the details of the train's interior. But it's the sound that's most improved from the DVD release. The uncompressed mono track easily reproduces all the dialogue and the important train sounds that make us feel like we're "all aboard." This movie is 73 years old, so I imagine this is the best we'll ever see it.

The extras include a 1962 interview with François Truffaut; "Mystery Train," a video essay on the movie and its characters' actions and motives; and a handsome gallery of still photos. The entire film is supplied with a running commentary from Bruce Eder, which is not always screen-specific but contains a staggering amount of information.

The Lady Vanishes is a tidy little thriller that represents Hitchcock at his best. It contains delightful characters put in precarious situations with exciting results, and Criterion has given us an edition that's second to none.

Be sure to watch for: Hitchcock knew that telling the audience a secret before the characters discover it is a great way to heighten suspense. In chapter 18, the villain (a very sinister and suave Paul Lukas) sits across a table from Iris and Gilbert in the dining car. He has ordered poisoned drinks for the hapless duo. When they arrive, Hitchcock emphasizes the attempted poisoning by shooting part of the scene through the glasses. Will the targeted couple pick up the drinks or not? It's a tense moment that’s absolutely Hitchcockian.