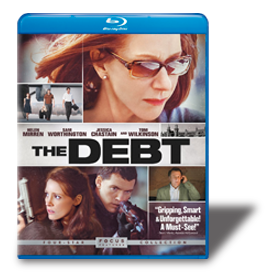 A Suspenseful and Thrilling Espionage Tale

Espionage thrillers that are both intelligent and exciting aren't too common, but we can now add The Debt to this short list. The film, based on Ha-Hov, a 2007 Israeli movie, explores the wages of sin and deceit using high-level dialogue and, for the most part, superb acting. It's also heavy on action, which occurs in short, intense bursts that resonate like electric shocks.

The always-marvelous Helen Mirren is on hand, and she plays no small part in helping this film achieve excellence. We see her in 1997, playing Rachel Singer, who has just become famous (thanks to a book her daughter wrote) for her past exploits as a Mossad agent. Flash back to 1966 when she was 25 and was partnered with two male agents in East Berlin to capture a suspected Nazi war criminal who tortured and executed thousands of Jews during World War II. Rachel (played in flashback scenes by the immensely talented Jessica Chastain) joins David (a wooden Sam Worthington), and Stephan (Marton Csokas), the team's erstwhile leader.

A love triangle almost develops, but the team's focus on the mission nips it in bud. When their plan goes wrong, the three agents face a choice: botch the mission or invent a story that will make them heroes. The course they take makes for exciting action in 1997, like a poison that's been cooking for 31 years. The shifts in time are easy to follow, and you'll have no trouble believing Chastain as a younger Mirren, as she perfectly mirrors Mirren's mannerisms and attitudes. The two men are a bit of a stretch, but since Rachel's character holds events together, they don't distract from the central conflict.

Universal has brought The Debt to home video with a solid Blu-ray presentation. The film uses muted colors (perhaps to represent the Cold War setting), but they manage to seem lively, rich, and never drab. Shadow detail is good, sometimes at the expense of securing a really solid black, and skin tones are fine. The soundtrack is excellent. Softer sounds, such as dripping water, heighten the suspense, while action sounds, which will call on your subwoofer, have visceral impact and focus. The dialogue, often spoken in whispers, is always perfectly intelligible.

The disappointing extras amount to almost nothing. There are three featurettes that are just publicity fluff, and there's a staid commentary by director John Madden and producer Kris Thykier, but that's it. Universal is counting on the film itself to carry this release, and fortunately it does. Despite the lack of extras, The Debt is still highly recommended.

Be sure to watch for: Chapter 6, in which the team abducts Vogel, is set at a railroad crossover point between East and West Germany. There are a lot of architectural details and shifts in lighting that the Blu-ray transfer handles superbly, just as it nails the sound of speeding trains and, later, crackling gunfire.