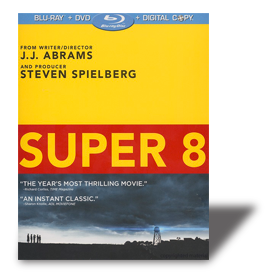 Super 8 is a monstrously enjoyable film on multiple levels. Part era-defining monster movie, part tribute to Steven Spielberg, the film, directed by J.J Abrams, is ultimately devoted to the art of Super 8 filmmaking.

Back in the day, before every smartphone housed a digital video camera, people used 8mm cameras to document the important events in their lives. After you shot the film, you'd send it off for developing, and a week later you'd be able to relive the captured moment. Many kids latched on to the 8mm, and later the Super 8, for a very different reason. These young artists, bitten by the movie bug, set out to make their own films. Abrams started this way, as did Spielberg, and in an unusually interesting set of extras we learn that Michael Giacchino, composer of Super 8’s super music score, did as well. With Super 8, Abrams pays tribute to all the creative kids who helmed a camera, and he captures the thrill of making those early 8mm films.

The story finds a group of kids filming at a railroad station that becomes rubble after a passing train is derailed by a pickup truck on the tracks, and the plot solidifies Abrams's reputation as a first-rate storyteller. The train in question was transporting an alien (not the cute E.T. kind), which escapes to terrorize the town. Suspense swells as the film slowly reveals the hunted alien -- until the final five minutes, which seem rather unlikely and perhaps a little too "feel good."

The Blu-ray is demonstration caliber in all respects. The picture is sharp as a tack, with items in the background as focused as those in front, but the lens-flare effects that Abrams loves are more objectionable on this Blu-ray than they were in the theater. A lens flare now and then can be effective, but here Abrams goes overboard and the Blu-ray's images are so detailed that they stand out too much. If the overall film wasn't so mesmerizing, they would severely detract; as it is they knock half a star off my rating.

The sound is, to use an overworked but appropriate word, awesome. Surrounds accentuate specific effects, such as falling debris from the train wreck, but they also establish location and atmosphere. The overall effect is totally immersive and helps pull you into the movie. The documentary featurette is much better than average, and you can play the chapters individually or as one long hour-and-a-half film. There's also a set of deleted scenes that are more like scene extensions. The one extra that doesn't work deals with the train crash. It's an interactive piece that's chopped up into small bits that just aren't satisfying. A linear featurette would have been better.

The package includes a DVD and digital copy in addition to the Blu-ray. Overall, this is a Blu-ray to own rather than rent. You'll want to demo that train crash many times to show off your home theater, and you'll catch nuances in the remarkable acting every time. You might even get used to the lens flares. And make sure you sit through the end credits to see the finished Super 8 movie the kids shot from their wild experiences.

Be sure to watch for: By all means, pay close attention to the train crash that occurs early in the film. I've seen a lot of crashes of all types in various movies, but this one set me on edge from beginning to end through its superlative camera work, perfect editing, and a sound design that just can't be beat for impact and clarity. Oscar, anyone?