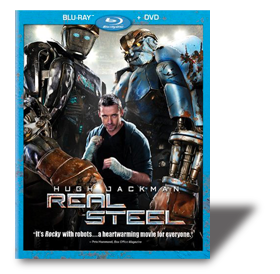 I wandered into this movie quite by accident. Our power went off in an unusual October snowstorm, so to keep from going nuts I headed for the mall theaters in the next town. When I got there, the only movie that was about to start was Real Steel, so I bought a ticket. I didn't regret it. This film has received a lot of bad press -- some reviews have been downright vitriolic -- but it's actually a great little film in the Disney tradition. Perhaps other critics expected something else, but Real Steel is at its heart a film about redemption and a father bonding with a son he abandoned.

That father is Charlie Kenton (Hugh Jackman), a former middleweight boxing contender. Charlie's career peaked just when boxing was dying due to the rise of robot boxing, which could be more brutal and could better satisfy a crowd. Charlie has become a robot wrangler, trucking his rusted 'bot around to county fairs in the hope of winning a few bucks. At the beginning of the summer season, he finds that his ex-wife has passed away and the courts need to decide the custody of his son, Max (Dakota Goyo). Charlie agrees to turn the boy over to his aunt and her rich sugar-daddy husband, but he has to take care of the boy for the summer.

At first suspicious of each other, the two begin to bond when Max finds an old robot, polishes him up, and enters him in fights. They start to win, and before long they're looking at championship bouts. Jackman and Goyo have terrific chemistry, so the bonding seems entirely natural, maybe inevitable. Yes, the story is sweet, but I didn't find it saccharine and the dramatic robot fights certainly add spice. The filmmakers actually constructed animatronic robots, so much of what you see is puppet manipulation, not CGI. The technique is effective, and it makes the whole idea of robot boxing quite believable.

For the most part, the images are state of the art. Skin tones are accurate and colors are lively without being overdone, while the contrast is close to perfect and shadow detail is abundant. The metallic robot textures are well represented, as are the softer details like the texture of clothing. The soundtrack is both lively and immersive. The rear channels are going most of the time, and in the boxing scenes the crowd seems to be all around the viewer. The music has real heft, yet the overall mix remains transparent and clear.

Extras include a director's commentary from Shawn Levy and a feature called "Second Screen," which lets you synchronize your iPad, iPhone, or iPod Touch to the movie and receive extra information as you play it. I'm not a fan of the concept, as I find it confusing to have to look at two places. For my money, picture-in-picture is better on one screen, and the Blu-ray of the first Robert Downey Jr. Sherlock Holmes movie nails this method. In addition to "Second Screen," there are a couple of weak featurettes and an amusing short showing how Sugar Ray Leonard trained Jackman to look like a real boxer.

Despite what other critics may say, Real Steel is a great little movie. Discover it as I did, without expectation, and you're sure to have a good time.

Be sure to watch for: Chapter 6 takes place in Metal Valley, a junkyard that's home to thousands of spare parts. Shadow detail is very impressive as locations momentarily light up with flashes of lightning, and the storm sounds envelop you until the rain falls all around you. Overall, it's a demonstration-caliber scene.