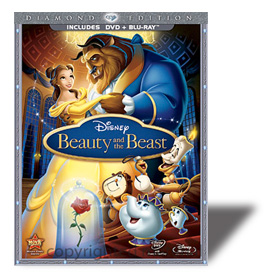 I’ll confess it: Every time I come to the end of this animated classic, I get a lump in my throat and my eyes well up with tears. Disney’s Beauty and the Beast resonates in a very deep place that knows no boundaries of age or background. And now Disney has brought it to home video in versions that are technically flawless. Versions? Yes, you can obtain it as a three-disc Blu-ray/DVD combo pack either in DVD packaging or in Blu-ray packaging, and there’s also a two-disc DVD edition.

With music by Alan Menken, Beauty and the Beast plays like the ultimate Broadway show. The biggest difference is that it’s not limited to stage action, and since it’s animated, it can use special effects not available to live productions. But that didn’t stop it from becoming a hit Broadway show that has gone on to be a favorite production for local theater groups all over the US. The voice casting is perfect, as is the editing, and the story flows without a hitch or dead spot. The Blu-ray offers three versions of the movie: the original theatrical release; an extended version, which seamlessly reinstates the musical number “Human Again”; and a picture-in-picture storyboard edition with commentary by producer Don Hahn.

The DVD included in this set looked awfully good, especially when upsampled on my Oppo Blu-ray player, but the Blu-ray Disc is perfection that I can’t find fault with. The notes tell us that Disney technicians found some water spots on the master that weren’t noticeable on DVD but would have been on Blu-ray, so they cleaned up the entire print with loving care -- and a great deal of expertise, I might add. There’s not a spot, hole, jaggie, ghost image or any other aberration here. The vivid colors seem to leap off the screen, the definition is beyond reproach, shadow detail is ideal, and blacks are really black. This is HD video done to perfection.

The audio has been re-mixed into 7.1 DTS-HD Master Audio and it, too, is ideal. The front stage is lively, with dialogue often distributed left to right rather than being all in the center, and the rears are alive with sound throughout virtually the entire film. I believe that Robby Benson’s voice performance as the Beast is one of the greatest voice characterizations of all time, and it comes across well on this Blu-ray, ranging from loud roars and rants that involve the LFE channel to softly spoken inner-directed asides. Audio for the music is focused and transparent, and nothing is slighted in this mix, which is one of the best I’ve heard for any film, animated or live action.

The extras (spread across all three discs) are what you’ve likely come to expect from Disney’s Diamond Edition releases: They’re plentiful and meaningful, and they’ll enhance your appreciation of the movie considerably. Disney’s Beauty and the Beast remains a timeless classic that you can view over and over, and it now stands as a Blu-ray demonstration disc with few peers.

Be sure to watch for: The film opens and closes with drawings of stained-glass windows that tell the story. At the end of the movie, we see the final one close-up, and the camera then pulls back to reveal the window frame adorned by vines and flowers. The window retains its astonishing sharpness all the way from close to distant.