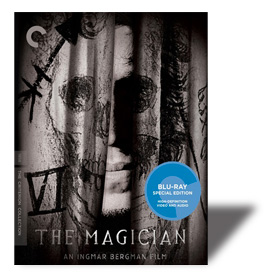 Released right after the highly successful debuts of The Seventh Seal and Wild Strawberries, Ingmar Bergman’s The Magician is often ignored as representative of the revered director’s best work. Its moods vary to the point that it’s difficult to know whether to call it a comedy, as did Bergman, or something darker. When it was released in 1958, it was somewhat scary and quite disturbing. I remember seemingly endless college conversations about the eyeball in the inkwell during the attic scene. But what was grisly then now seems tame, and you can finally focus on the movie as Bergman intended it: a revenge on his critics and a study on the relationship between an artist and his audience.

In the film, Max von Sydow plays Albert Emanuel Vogler, Bergman’s alter ego, a 19th-century alchemist and peddler who’s become little more than a charlatan deceiving his audiences with cheap tricks. There are hints that he was once a great theatrical artist, but in the movie he has a somewhat unsavory reputation, so much so that he’s been called before the officials of Stockholm to present a private performance so the bureaucrats (critics) can decide if his show is worthy of public consumption. Suffice it to say that Vogler still has a few tricks up his sleeve, and the tables get very effectively turned.

Deception is a watchword in this film. Vogler is not who he seems, and his young assistant, assumed to be a boy in the beginning of the movie, turns out to be his wife in disguise (acted by the radiant Ingrid Thulin). There are many other sleights of hand, the most remarkable being a mistakenly autopsied corpse. The whole affair is presented in stunning black-and-white photography that’s rife with shadow and light, and it’s supported by Erik Nordgren’s remarkable score, which proves that less can be quite a bit more. Some scenes are scored for only a single harp or for timpani, yet these sparse instruments are more effective than an entire symphonyorchestra.

Once again, Criterion has achieved a triumph with a black-and-white film. The high contrast is perfect, allowing blacks to be inky and whites to be very bright. Detail in hair, clothing, and set decoration is perfect, and the English subtitles that translate the Swedish soundtrack are placed at the very bottom of the 1.33:1 frame where they’re easily read. The sound is also excellent, especially considering the film’s age. Only the extras disappoint. There are two brief interviews with Bergman, one in Swedish with subtitles and one in English, and a good but very brief visual essay by Bergman scholar Peter Cowie. There are also good essays in the supplied booklet by Olivier Assayas, Geoff Andrew, and Bergman himself. Were this not a Criterion release, that would be enough, but by Criterion’s usual standards things feel a bit lean.

By all means, if you haven’t seen this film, rent or buy it. There’s much to enjoy and many mesmerizing images to see.

Be sure to watch for: In chapter 7, the camera discovers two servant girls working in the foreground of a kitchen while Vogler and his disguised wife are eating in the far background. The detail of both foreground and background is exceptional, as is the accurate delineation of set details and costumes, with Vogler and his wife in black and the maids in cheerful stripes with bright white accents.