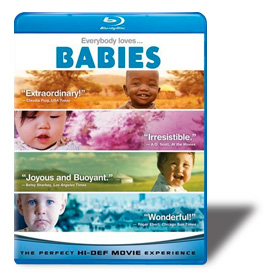 An Appealing Look at the First Years of Four Infants

For this entertaining and somewhat striking documentary, director Thomas Balmès followed and filmed the lives of four babies from their birth to their first steps. The quartet of infants was selected from four widely varying cultures: Ponijao was born in Namibia, Bayar in Mongolia, Mari in Tokyo, and Hattie in San Francisco.

Cynics will dismiss this film as too cute, but that’s what cynics do. Not being one, I found it to be a movie montage that delighted my eyes and ears while pointing out a universality that transcends cultural differences. Balmès must have filmed for a very long time to capture the defining images that made his final cut. The four children are shown playing, eating, crying, gurgling, and laughing while interacting with parents, pets, and the rest of their newfound environment. Animals, especially cats and goats, figure heavily in the scenario.

Though Bayar and Ponijao must cope with cultures that have low sanitation (Bayar, in particular, always seems to have insects crawling over his body) while Mari and Hattie enjoy the latest technologies that Japan and the US can offer, they all share an innate inquisitiveness; an unwavering desire to taste, touch, see, and learn; and sense of delight in their triumphs as they learn first to crawl and then to walk.

The movie was shot in HD, but its picture quality varies with the different locations. It’s never short of excellent, but often, as in establishing shots of Tokyo and San Francisco, it’s of astonishing, five-star quality. There is no dialogue as such in this movie, so the DTS soundtrack is devoted to Bruno Coulais’ evocative music and various sound effects. The Blu-ray’s sound is full and focused, using mostly the front channels but opening up effectively to the rears on more than one occasion. The extras aren’t much -- just a very short featurette of the director visiting the four children three years on to show them the movie and an even shorter featurette honoring the winners of “Your Babies Sweepstakes.”

Babies is a remarkable achievement. Without using dialogue, Balmès has created a cohesive and charming opus, a rhapsodic “symphony” to babies that will make everyone chuckle, smile, and remember. All but the cynics, and too bad for them.

Be sure to watch for: Chapter 9 opens with a scene in Tokyo of a woman with an umbrella walking toward the camera on a bustling city street. Notice how both background and foreground are sharp and clear. The scene has a compelling three-dimensional feeling, without glasses!