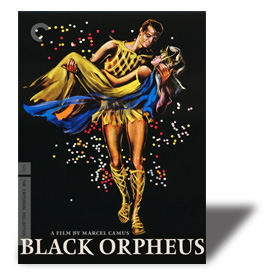 Criterion’s Black Orpheus Is, in a Word, Irresistible

Rio de Janeiro! Carnival! Dancing in the streets! Insistent, incessant, irrepressible drum beats! The birth of bossa nova! Bright colors and lavish costumes! A love story for all time! Any of these exclamatory phrases could be used to describe Black Orpheus, the award-winning movie that took the world by storm in 1959. Made by French director Marcel Camus, the film explored Brazil while wrapping it up in an appealing, superficial toy box worthy of MGM or Disney. Residents of Rio’s poorer sections, who are portrayed as constantly happy and always singing and dancing, bear as much of a relationship to reality as Gershwin’s romanticized Catfish Row denizens in Porgy and Bess or, “Ol’ Man River” aside, the joyful riverbank dwellers in MGM’s Show Boat.

The love story in Black Orpheus is an updating of the Greek Orpheus and Eurydice tragedy, and was based on the revisionist South American play Orfeu da Conceição by Vinicius de Moraes. In this film version of the play, Orfeo (Breno Mello) is a streetcar conductor and Eurydice (Marpessa Dawn) is the new girl in town who steals his heart. But Eurydice is pursued by Death (Adhemar Ferreira da Silva in a slinky, death’s-head costume worthy of Carnival). The interesting truth underlying the romanticism is that all of the actors are of African descent. The American and European public had previously been exposed to South America via Carmen Miranda and Xavier Cugat, performers with Hispanic backgrounds, but Camus dared, in segregated 1959, to make it clear that Brazil also had a large black clear.

The Carlos Jobim and Luiz Bonfá composed the film’s score, which shows the influence of the bossa nova beat on Brazilian music. But the drumming sequences just as clearly reveal African roots, and taken together, the two influences form a wonderful concoction that provides memorable melodies and rhythms, making it difficult to sit still while watching this movie. The Criterion mono soundtrack has been considerably cleaned up from the original optical version, and it’s offered uncompressed. The images on screen are as memorable as the sounds, and the almost overly bright colors of the costumes play very well on Blu-ray without any smearing or bleeding. The movie is presented in its original 1.33:1 aspect ratio, and in Portuguese with fairly easy-to-read English subtitles. There’s also an English-dubbed soundtrack, but you don’t want to go there. Stick with the original.

The extras include a full-length film, Looking for Black Orpheus, which offers a closer look at the racial makeup of Rio and the racism that has existed there. There are also archival interviews with Camus and Marpessa Dawn, as well as a contemporary interview with Brazilian cinema scholar Robert Stam, jazz historian Gary Giddins, and Brazilian author Ruy Castro, who discuss the film’s musical roots in great depth.

Black Orpheus is an important film in the history of cinema, but it’s also a very entertaining movie that’s full of life and romantic vision. I’ve seen it many times, but never looking as gorgeous as it does in Criterion’s colorful Blu-ray edition. It is, in a word, irresistible.

Be sure to watch for: I was struck by the beginning of chapter 11, in which the hillside community prepares to go down the mountain to celebrate Carnival in metropolitan Rio. The scene is a riot of blues: Serafina (Léa Garcia) is in a turquoise top with a bluish purple skirt, behind her is a building painted in navy blue and white stripes, and yet another steely blue can be seen in Rio’s harbor. All of these blues are set against a background of green grass on the left, and to the right of the screen are banners and flags bearing every conceivable color. It’s just as demanding as any color test pattern, but much more enjoyable.