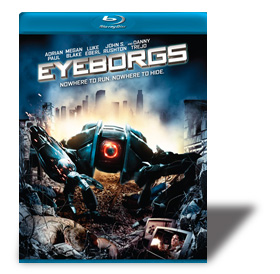 Eyeborgs is the kind of movie that most people won’t notice. But while many will pass it off as a schlocky science-fiction B movie without a second thought, I’ll say it isn’t so. Despite the film’s obviously low budget, its clever filmmaking tricks the audience into thinking it’s something more. The plot involves a not-too-distant future in which complete surveillance is the norm. Observation robots, called eyeborgs, have been created in various sizes and are linked to a central system that spies on everyone’s activities. The small, two-legged ones are actually pretty cute, until you realize what they can do to a human through electric shock. But there’s no question about the larger ones: they resemble giant spiders, and they have wicked built-in tools to harm. As the story unfolds, federal agent R.J. “Gunner” Reynolds (Adrian Paul) begins to realize that the eyeborgs are about much more than keeping the United States safe from terrorists, and he gradually uncovers an insidious plot for total domination. By whom? You’ll have to see the movie -- there will be no spoilers here.

The script, by Fran and Richard Clabaugh, is intelligent, and it’s acted with skill by a group of actors known for supporting roles on television shows. Richard Clabaugh is also the director, and because he teaches cinematography at the North Carolina School of the Arts, the production was centered in Winston-Salem, where the school is located. The eyeborg robots are CGI, though you can tell on only one or two occasions. The photography is solid, and the Blu-ray Disc reflects it with an honest, well-defined look and skin tones that are right on target. The dynamic soundtrack makes good use of surround possibilities, and the extras provide a clear and straightforward look at the film’s production and how the producers worked around the low budget.

Eyeborgs probably cost five percent of a Hollywood-budgeted CGI fest like G.I. Joe: The Rise of Cobra, but it’s more effective in its simplicity (as opposed to Joe’s simple-mindedness), and whereas Joe had little dramatic impact, Eyeborgs scores as a solid science-fiction drama, too. Score one for Eyeborgs.

Be sure to watch for: Chapter 10 places the viewer in the middle of a final shootout with the robots. Shadow detail is particularly good in these scenes, and it will let you know whether your brightness and contrast are adjusted correctly.