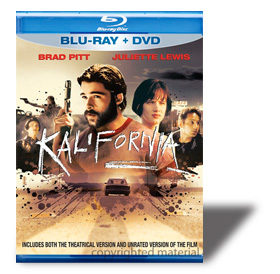 Kalifornia Is Propelled by Superb Acting

Kalifornia was released to a limited number of theaters in 1993, after which it was promptly forgotten. A few critics gave it favorable reviews, but by and large the thriller was ignored. It later resurfaced because members of its cast, including Brad Pitt, Juliette Lewis, David Duchovny (pre X-Files), and Michelle Forbes, went on to find fame. The film received a released in the early days of DVD, and it’s now one of the headliner titles in the recently launched Fox and MGM Blu-ray Plus DVD series.

This renewed interest is gratifying, because the movie really is top-drawer. Duchovny and Forbes play a yuppie couple who travel to California while gathering research for a book on serial killers, for which she’ll take photographs of sites where murders occurred and he’ll write text to accompany them. After placing a notice for someone to share the ride and expenses, they draw in Early Grayce (Pitt) and Adele Corners (Lewis), poor white trash and, in Early’s case, a killer. The rest of the movie depicts a road trip from hell as Early’s true nature slowly emerges. The script never descends into slasher-flick land, and the acting is as good as you’ll see anywhere, with all four principals fully embodying their characters. Lewis and Pitt are particularly good, turning in what might be the best performances of their careers. How they escaped award nomination is a mystery, as is the fact that the movie’s director, Dominic Sena, has gone on to make only two-star films like Gone in 60 Seconds, Swordfish, and Whiteout).

Bojan Bazelle’s cinematography is a major factor in Kalifornia, as he utilizes imaginative angles and focus points to generate just the right mood for each scene. These details come across very well on the Blu-ray. The audio is mostly up front, and the DTS-HD Master Audio 5.1 tracks kick up a ruckus when required while always allowing for clear dialogue. There are no extras beyond a trailer, though we might consider the second disc to be one big extra. Using streaming video, it contains the film in both unrated and R-rated versions, in both widescreen and pan-and-scan. The Blu-ray contains only the unrated version, which adds about a minute of uncomfortable violence to the movie.

If you haven’t seen Kalifornia, you owe it to yourself to give this unheralded masterpiece a look. If you have seen it, have fun looking back at the early careers of the famous actors involved. You’ll easily see why they’ve been successful; these early efforts reveal superb talents.

Be sure to watch for: There are many shots in this movie that demonstrate Blu-ray’s ability to crisply reproduce backgrounds. At the beginning of chapter 20 there’s a helicopter flyover on a beach, with Michelle Forbes on the far left of the screen and a beach house on the right. As the helicopter fades in the distance, it keeps its shape and definition, giving the scene a three-dimensional depth.