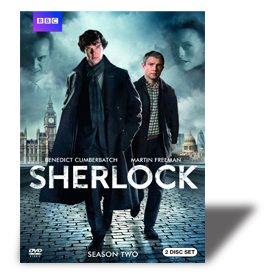 At the moment we have not one, but two updated versions of Sir Arthur Conan Doyle's famous detective series vying for attention. Though they have a lot in common, there's one big difference. Guy Ritchie's movies with Robert Downey Jr. and Jude Law use 21st-century storytelling devices and style, while the actors are dressed in authentic period costumes. BBC's Sherlock often uses similar cinematic devices, but it has moved the stories to modern day. Both versions are snappy, witty, adventurous, and suspenseful, yet they exhibit great affection and respect for the originals. I wasn't surprised to find the trailer for Ritchie's Sherlock Holmes: A Game of Shadows on this two-disc BBC Blu-ray Disc set of the second season of Sherlock. They go together well.

Sherlock's stories are modern versions of the originals by Doyle, though in the first season several minor stories were incorporated into larger movies. Yes, movies. Each Sherlock episode is 90 minutes long and has the pacing of a theatrical film. The second season tackles three of the most famous stories and renames them: "A Scandal in Bohemia" becomes "A Scandal in Belgravia," The Hound of the Baskervilles becomes "The Hounds of Baskerville," and "The Final Problem" is presented as "The Reichenbach Fall."

Benedict Cumberbatch once again plays Sherlock as an icy egomaniac who isn't happy with life unless he can prove that he knows more about everything than anyone else. Yet we sense a gentle side of him that he keeps a secret, even from himself. Martin Freeman is an intelligent Dr. John Watson. Returning from the military, he ends up staying with Holmes at 221B Baker Street and assisting in his investigations. Both are refreshingly young, and neither is aware that they've started a friendship that will last a lifetime until The Reichenbach Fall.

The three movie-length episodes have high production values and are perfect in their contrast, detail, skin tone, and shadow detail. Some darker scenes aren't pristine, but by and large the picture is above satisfactory. The audio tracks are clean, clear, and atmospheric; anything beyond what they are would no doubt be a distraction. The extras are a little lean, consisting of a short production featurette and two commentary tracks, which feature different mixes of cast and crew.

If you like Ritchie's theatrical movies about Sherlock Holmes, there's a 99.9 percent chance that you'll love Sherlock. In my estimation it's one of the most successful updating efforts ever achieved onscreen.

Be sure to watch for: All of Sherlock is demo material. I particularly like 17 minutes into chapter 2 of "The Hounds of Baskerville," when Holmes and Watson enter a local pub seeking information. The place is so tangible that you can almost smell the beer, and you can surely read the brands sold and revel in the detail of the barkeep's plaid shirt.