Tchaikovsky: "The Nutcracker and the Mouse King" 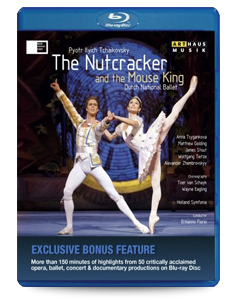 A Superb Nutcracker with a Dutch Twist or Two

Tchaikovsky's suite from The Nutcracker was a big success initially, but the complete full-length ballet was something of a flop in its premiere performances. It took George Balanchine and his New York City Ballet to put it on the map. That version had its first performance in 1954, and it had such an influence that almost every town or city in the United States now has performances of The Nutcracker during the holiday season. The ballet is so popular that a few sources indicate that performances of it by major American ballet companies account for 40 percent of annual ticket sales of the genre.

The ballet is also popular overseas, and Arthaus has made the popular production by the Dutch National Ballet available on a state-of-the-art Blu-ray. Though the basic outline of the ballet is intact, there are some major changes that require purists to keep an open mind. For one, the Mouse King is not dispatched until the second act, whereas he usually perishes in the first-act battle with the Nutcracker. There is no Sugar Plum Fairy. Clara dances the famous pas de deux with the Nutcracker Prince, who doubles as Mr. Drosselmeyer's nephew. Perhaps most important, there is no growing Christmas tree in the first act; in fact, there's no Christmas tree at all, as the action is set on the eve of St. Nicholas.

I'd be remiss if I didn't mention those differences. If I told you this was one of the greatest versions of The Nutcracker on Blu-ray and you bought it expecting the familiar story in detail, you'd be disappointed. But if you can keep an open mind, this is one of the best. It is beautifully danced by all concerned, though special mention must go to Canadian dancer Matthew Golding, the Prince, who uses his long arms and legs with near unbelievable strength and grace. For once, it is the male dancer in the pas de deux that you might have your eyes on as much as his female partner (Anna Tsygankova). Together they stun.

The sets are good, and the costumes excellent. Wonders abound, including dancers ice skating on a frozen canal. There's a lot to see, but what really deserves attention is the music. Seldom have I heard this ballet played so well. The orchestra is a new one, formed just 11 years ago, calling itself the Holland Symfonia. Under the baton of Italian-born, Canadian-reared maestro Ermanno Florio, they play with virtuoso abandon while still paying great attention to detail. The sound is very transparent and has lots of presence, besting many audio-only versions. The HD video is crisp and clean as well, with good contrast and excellent detail.

As an "extra," there are more than 150 minutes of trailers from 50 Arthaus Musik Blu-ray releases. As if all that isn't enough to grab your attention, Amazon.com offers this Blu-ray at the incredibly low price of $9.99! And you can beat that if you read the fine print indicating other sellers.

Be sure to watch for: At the beginning of chapter 9, as the mice fight the toy soldiers, they hurl a giant piece of cheese at their enemy, using a large mousetrap like a Medieval catapult. Most clever.