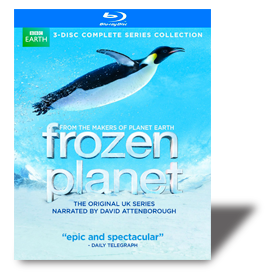 The Latest, and Best, of BBC's Nature Series

One of the supplements on this magnificent three-disc set is "Frozen Planet: The Epic Journey." You might want to call it "Frozen Planet Lite," since it shows highlights of the first six parts of the series. I found myself wishing I had watched it first, like a very long trailer, but others might prefer to watch it after, as a remembrance of favorite scenes.

And what memories! Penguins springing out of the water and onto the ice; narwhals, the unicorns of the sea, traversing small paths of water through the ice and showing their magical horns when they surface for air; the birth of polar bear cubs; a raven and a wolverine forming an unlikely alliance to find food; and much more. Those who are familiar with the BBC's Planet Earth and Life will need no urging to watch Frozen Planet, while those new to the series might well start with this one, the best edited and organized of them all. It devotes an episode to each season of the year bookended by episodes that serve as prologue and epilogue. Each episode is divided fairly evenly into footage of the Arctic and the Antarctic.

This time David Attenborough not only narrates the collection but also appears in a seventh episode devoted to global warming and the significant geographic changes occurring at the poles. It's quite impressive to see this robust octogenarian speaking at the South Pole, gesticulating emphatically with his hands. Be sure to buy the original UK edition, which includes Attenborough. BBC has been known to play down to American audiences by using Hollywood stars as narrators. They might do it satisfactorily, but no one does it like Attenborough!

"Winter" was the episode that really grabbed my attention, and it's perhaps the most dramatic segment of them all. It starts in the Arctic with blowing snow creating a near whiteout while the shrill wind wails around the listener thanks to some very excellent surround sound. This opening sets a chilly stage, leading you to wonder what in the world could live under such conditions. The episode answers by showing us tiny voles tunneling underground and the great grey owl that hunts them. We see a mother polar bear digging a burrow where she'll give birth to two cubs before trekking out on the frozen ocean in search of food. We meet the mighty bison, the largest mammals in North America, and we're treated to a thrilling aerial view of two wolves pursuing them. The herd thunders on like a stagecoach fleeing from Indians in the Old West until one young bison is separated from the group.

Things are bleaker at the South Pole. Above ground there are only the male emperor penguins, huddled together, holding their mates' precious eggs on top of their feet while the females are away at sea foraging for food. They return in the spring to take over the care and feeding of their chicks. Under the thick ice of the frozen sea is the Weddell seal, which must surface occasionally but lives mainly under the ice where the climate is as still as that above ground is turbulent. The Antarctic winter is the harshest on earth; it’s amazing that the emperor penguins and Weddell seal can tough it out.

There's a "Freeze Frame" supplement for each episode that shows how the cameramen obtained some of their amazing footage -- with consummate skill, and often great difficulty, while avoiding almost always present danger. One member of the crew seems truly moved by being close enough to killer whales to reach out and touch one. Better him than me! It reminds me that these brave cameramen have taken great risks so I can enjoy the sights on my 65" screen in a safe and secure home theater. The awesome HD footage has been transferred to Blu-ray with meticulous detail, and the surround sound engulfs the viewer with atmosphere and George Fenton's monumental music score.

If you own HD equipment and haven't seen any of the BBC nature-series films, or you've seen them only on broadcast TV, you owe it to yourself to see this new one. It's more exciting and better reproduced than 90 percent of the feature films out there.

Be sure to watch for: Chapter 1 of "Winter" focuses on the spectacled eider (a sea duck), their flock hedging its bet against migration by finding an open spot in the ice. There are hundreds of thousands and the cameras capture them from many different angles. These breathtaking scenes perfectly showcase the sharpness and definition of the Blu-ray format.