"The Phantom of the Opera at the Royal Albert Hall" 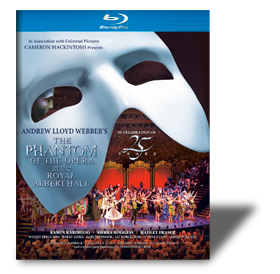 The Phantom Done Justice on Blu-ray

Andrew Lloyd Webber's The Phantom of the Opera is one of the biggest crossover productions in the history of theater. When touring companies have come to nearby Washington, DC, I've seen friends who normally listen to rock music eagerly order prime seats right alongside typical fans of classical music or Broadway shows. Perhaps this crossover appeal explains its 25-year run in London; its record-breaking 24-year run on Broadway, which will surpass 10,000 performances on February 12, 2012; and an original cast recording that has gone platinum four times in the US. Everyone seems to enjoy the story of a rising soprano coached by a disfigured madman who haunts the shadows of the Paris Opera and lives in its underground waterways.

Most of the millions who love this work were extremely dissatisfied with Joel Schumacher's 2004 movie, in which he made a succession of disastrous decisions, not the least of which was casting a non-singer (Gerard Butler) in the lead. Those enthusiasts can rest assured that this 25th-anniversary production is almost totally satisfying. Its few deficiencies are trifles considering the strength of its cast and the overall production.

Canadian Ramin Karimloo plays the Phantom, and he's simply terrific, bringing all the pathos and scattershot rage of the character to life. His Phantom isn't just a dangerous psychopath; he's a wronged man who became a monster. His last cry of anguish at the end of Act II left me breathless.

The rest of the cast is just fine, too. Sierra Boggess is a pretty Christine, who evolves believably from chorus-line status to super diva. Hadley Fraser is dashing and steadfast as Raoul, the other man who loves Christine. The scene with Christine, the Phantom, and Raoul near the end of Act II really strikes sparks and catches fire.

To put this show on at the Royal Albert Hall, the crew had to construct a stage. And since the venue had no overhead space to fly scrims in and out, they used video projections on gigantic panels that could slide sideways or rise out of the stage. This technique presents my only real gripe with this handsome production: these panels kick ass when seen from even a short distance, but when a camera goes in close to catch a performer, you can often see the pixels. Thankfully, the camera work is so skillful that you'll rarely notice, and the drama is so captivating that you won't be overly bothered. The Blu-ray picture is also sharp as a tack, with good contrast and shadow resolution, and the audio is full bodied and has excellent presence. The thumping electric bass that accompanies some of the Phantom's music is focused, forceful, and clean.

At the end of the production, after the initial curtain calls, composer Andrew Lloyd Webber comes out to introduce the original Christine, his ex-wife Sarah Brightman, as well as a handful of significant singers who have played the Phantom, including the original one, Michael Crawford. I wish this had been added as an extra, as it takes away from the dynamic ending of the show. You might want to use your pause button and come back to it later. As for planned extras, there's an entertaining production featurette that details, among other things, the creation of the Phantom's iconic mask, and a trailer for the show's sequel, Love Never Dies, which Universal promises on Blu-ray and DVD sometime in 2012.

The Phantom of the Opera has broken records all around the world, and this production sums up 25 years of success. It arrives on Blu-ray with excellent picture and sound that reveal a production rich in both dramatic flair and nuance. Don't miss it.

Be sure to watch for: The costumes for the show are eye-popping, and just about the whole chorus is on stage in the ball scene at the beginning of Act II. The colors are so outrageous that they reminded me of early Technicolor movies where hues were contrasted in almost garish ways -- red against burgundy against magenta against strawberry blond -- just to show off. It's a true riot of color, which my DLP set displayed with ease.