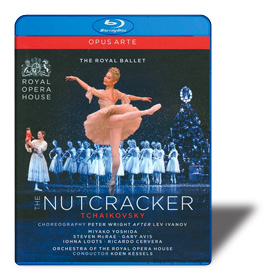 Momentum has built ever since the New York City Ballet premiered its full-length version of Tchaikovsky’s ballet, The Nutcracker, in 1954. Before then, only the ballet suite was well known. Productions of the complete ballet were rare, and there were no recordings. That has changed to the point where any conductor worth his salt has recorded the work, and amateur productions in countless communities have become a holiday tradition. There are now even competing versions in the semi-rural area where I live.

There have been many video recordings of The Nutcracker in the past dozen years, some of them, such as the one by the American Ballet Theater, quite good. There have even been two previous releases on Blu-ray, a visually stunning version from the San Francisco Ballet, in which the story was updated to the San Francisco World’s Fair of 1915, and the drab, dutiful, often ugly production from the Marinsky Theatre, which omits the all-important Christmas tree, among other things, in trying to be "different." Both versions are revisionist in some way, but the San Francisco performance is more successful in changing things around a bit.

There was room, then, for an HD production that preserves more of the original plot and setting of the ballet, and this one fills the bill. The only big change here is that Clara (Iohna Loots), and the Nutcracker transformed into Hans-Peter (Ricardo Cervera), participate in the Act 2 dances, where often they merely sit off to the side as spectators. To my mind, this participation is very successful, especially since it affords one of the most exciting dances of the performance when Cervera and Loots join the two Cossack dancers (Paul Kay and Michael Stojko) in the "Russian Dance." As exciting and enjoyable as all the dances are, the real star of the production is Miyako Yoshida, whose mercurial Sugar Plum Fairy is full of elegance, grace, and élan.

The production values throughout are very high. The Christmas tree in Act 1 grows to an alarming size, as do the toy boxes and wrapped presents; the snow at the end of Act 1 almost becomes a blizzard; and the costumes are bright and chipper. The Blu-ray picture transfer has excellent color, and for the most part it's well focused, sharp, and clean. Though recorded live, the sound is pretty amazing; it's what you might expect from a high-quality studio recording. The extended harp solo that introduces the "Waltz of the Flowers" has amazing presence, the woodwind solos are easily heard, and the full orchestra has a very solid sound.  The Royal Opera Orchestra, by the way, plays for young conductor Koen Kessels with authority, virtuosity, and lovely tone.

For once there are some extras on a ballet video. They're slight, but they include a series of still photos of the cast, choreographer Peter Wright telling the story, and a series of rehearsals involving the children in the cast, with Wright as a demanding but rewarding teacher. It's fascinating to watch.

Be sure to watch for: The way in which various dances end in tableaux that are so precisely done, you could swear they were still photographs. The "Russian Dance" and "Waltz of the Flowers" are the best examples.