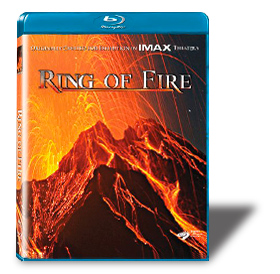 The Feature Is Good, but the Extras Are Better

I've always been fond of Ring of Fire, which is one of the earlier IMAX films, having been released in 1991. Several different companies released it on DVD with disastrous results, and due to substandard transfers it received low ratings from consumers and critics, indicating that IMAX images are apparently hard to transfer to disc. I've seen several that were genuinely disappointing, but lately more effort seems to be going into their Blu-ray transfers. Ring of Fire looks many times better than those awful DVDs. That's not to say it's the best-looking Blu-ray around, but it's quite good.

The "ring of fire" relates to a line of volcanoes girdling the globe. The documentary crew visits several of the mountains on the ring, including Mount St. Helens in the United States. There are some spectacular shots throughout Ring of Fire, especially those of the clouds of ash that are spewed heavenward to amazing heights when a volcano erupts. There's almost equally fine footage of lava flowing like a red-hot river, but Ring of Fire isn't just about eruptions and magma. It examines various cultures that live in close proximity to volcanoes. Miners in Chile dig sulfur from ash in the heart of a volcano, knowing it's unlikely they'll live longer than 30 years after being exposed to the fumes. Japanese snow monkeys lounge in hot springs created by a volcano with faces resembling humans at the spa, bored and just soaking it in. All of these scenes are presented in sharp, colorful video that's just short of reference quality. If you like low rumbling to show off your woofers and subwoofers, you'll find that effect in about half of the film's 38 minutes. In addition to having commanding bass, the sound is wonderfully immersive; there's something going on in the surrounds throughout almost the entire disc.

That's all well and good, but this disc stands apart for another reason: the supplement section comprises a baker’s dozen of trailers for other IMAX films, most of them of demonstration caliber. When friends come over and you want to show off your big screen (and let's face it -- we all want to do that), rather than tying up two hours of their time, you can pop on one of these trailers, and then if your guest wants more, you can pull out Avatar (still one of the very best HD transfers) and spend three hours with it. The trailers all have good video and surround sound. The latter is regular DTS 5.1, but it still registers a sampling rate of 48kHz on my processor's readout, and it sounds virtually indistinguishable from the feature's DTS-HD Master Audio tracks.

Be sure to watch for: The trailer for The Alps ends with an avalanche coming right at the camera. It's a cool scene, greatly aided by the excellent surround sound.