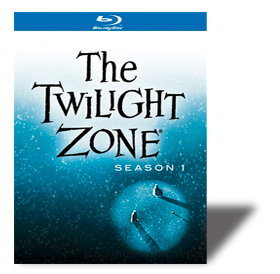 A little over 50 years ago, in the waning days of the Golden Age of Television, The Twilight Zone took the country by storm. Far from the typical hit show, it was an anthology series with a different story, different actors, and a different director for each half-hour episode. Holding it together was Rod Serling, the man who had envisioned the series and helmed it through five successful seasons. Serling had proven himself as a writer and penned most of the first season’s scripts. He attracted the best writers from the science-fiction community, including Charles Beaumont, Richard Matheson, Ray Bradbury, and Harlan Ellison, but he crafted around two-thirds of the scripts himself. The original series spawned two revival series, a feature film, and a radio series, and it became ingrained in the public consciousness. Actors such as Dan Duryea, Gig Young, Richard Conte, and Burgess Meredith would be remembered as much, if not more, for their appearances on The Twilight Zone as for their many feature films.

While I was watching this new super-duper Blu-ray set of the first season, it struck me that 50 years ago I watched these shows on a 20-something-inch television set that exhibited pronounced scan lines. I was now seeing it on a state-of-the-art 58" plasma set. My conclusion from this comparison is that, though the shows were first and foremost storytelling and drama of the first rank, the visionaries who brought them to life treated them exactly like feature cinema. How else could you explain the jaw-dropping video beauty of this set, which reaffirmed titles like “Time Enough at Last,” “Perchance to Dream,” “The Monsters Are Due on Maple Street,” and “The Big Tall Wish” as major masterpieces in the history of television -- heck, in the history of entertainment!

Did I mention that the video transfers were outstanding? It can’t be reiterated too often. The only reason they’re not getting the coveted five-star rating is that not all of the source material is perfect. Most of it is, however, and many of the episodes of this first season match the quality of Warner’s Casablanca or Criterion’s The Third Man. The contrast is high, but not too high, so shadow detail is superb (no crushed blacks here) and detail is astounding, with focused backgrounds often giving these episodes a sense of three-dimensionality missing in many newer releases. Image has previously issued DVD versions that were called “definitive editions.” Not compared to these Blu-rays. Junk your DVDs and upgrade, and I don’t say that very often.

The sound is uncompressed PCM mono, and it’s an outstanding achievement in its own right. The dialogue is clean, and the music is rich and full with more presence than I had thought possible. Then there are the extras! You know how I praise the Criterion Collection for its extras, and rightly so. This Twilight Zone set tops any Criterion edition thus far. Every episode but one (“Judgment Night”) features at least one bonus feature, and there are usually more. These vary, sometimes including the show with a different audio mix, an audio commentary or two from a film historian or one of the actors, a radio-show version of the episode, one of Rod Serling’s lectures, or a music-only track; there are 34 of them, to be exact. The latter are most important, as The Twilight Zone attracted and hired the best composers of its day, including Bernard Herrmann, Jerry Goldsmith, Leonard Rosenman, and Franz Waxman. The alternate, unaired version of the first episode (“Where Is Everybody?”) is here as well as the Desilu Westinghouse Playhouse production of Serling’s “The Time Element,” starring William Bendix and Martin Balsam, narrated and introduced by Desi Arnaz.

The Twilight Zone was a major achievement in its day, and this Image presentation of the first season on Blu-ray is just as important for our era. It’s exceptionally thorough, and it boasts drop-dead-gorgeous, downright astounding black-and-white video images. My guess is that when we ring out 2010, this four-disc set is going to be on the top-ten list of every video critic, and at the very top of many of those. Look for the other seasons to follow; the second season is scheduled for November 16.

Be sure to watch for: "What You Need," one of my personal favorites of the series, consists of both exterior and interior shots. On the Blu-ray, there’s an impressive sense of three-dimensionality for both, thanks to the resolution of foreground and background objects.