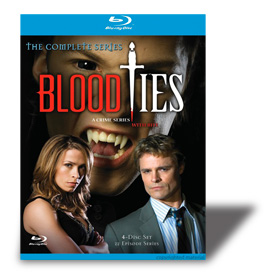 In case you haven’t been out at night lately, vampires are everywhere. The latest chapter in the Twilight series has just been released on DVD and Blu-ray, and television viewers are satiating themselves with The Vampire Diaries while awaiting the third season of True Blood. But the vampire-as-normal-citizen craze can be traced back to a source that has yet to receive recognition. Canada’s Forever Knight, in which 500-year-old Nick Knight sought redemption as a detective, first aired in 1989, before Buffy the Vampire Slayer and its spinoff, Angel, both of which borrowed from Knight’s odyssey.

Blood Ties (2007) continues the Canadian vampire tradition with a crime drama filmed in Vancouver (as a stand-in for Toronto). The show is based on a series of novels by Tanya Huff, one of Canada’s most celebrated fantasy writers, and it stars Christina Cox as Vicki Nelson, a detective who has recently retired from the department due to disability and who’s set up her own agency. She meets handsome vampire Henry Fitzroy (Kyle Schmid) while on assignment, and the two become friends as they investigate supernatural cases that have baffled police. Vicki’s old police-force flame, Mike Celluci, regularly pops up at crime scenes, and the three develop an intriguing love triangle as they work cases involving voodoo priests, mummies, demons, and, of course, other vampires. The series hits its stride after a shaky first episode, and the narrative remains solid until the last episode, which smacks of a quickly written wrap caused by cancellation, much like the final episodes of The 4400 and Jericho.

Eagle Vision has already released Blood Ties on DVD, but the set was riddled with problems, including the fact that it was windowboxed, which compromised the video quality. Not so with this spiffy-looking Blu-ray, in which the crisp picture, with its rich colors and natural skin tone, fills the screen. Because the show was shot in digital, the backgrounds are occasionally noisy, but the appealing picture quality makes up for the noise. The sound-quality rating is low mostly because the soundtrack offers little beyond clear dialogue and mediocre music, which might explain why it’s merely Dolby Digital stereo. The soundtrack is passable, but you’ll be left wondering how surround might have been effectively used. The extras, which include a production featurette, two trailers, and a still-frame gallery, are on the light side.

Be sure to watch for: In the opening of episode 16, Bugged, two leather-clad men stumble out of a bar and into an alley. One leaves and the other downs some ecstasy, at which point cockroaches begin to attack him. All the details of the dirty alley stand out, and the director wisely chose to leave the scene with an army of advancing roaches encircling the passed-out man.