Do Subwoofers Have a Sound?

In the world of loudspeakers, nothing provokes so much controversy as subwoofers. At one extreme are enthusiasts, reviewers, and manufacturers who seem to regard subwoofers as little more than appliances. They often say that subs possess no identifiable sonic character, and that a sub’s distortion, frequency response, and maximum output measurement tell you everything you need to know about it. At the other extreme are those who feel that subwoofers have characteristics that can be judged only by ear, and who use words such as tuneful, musical, and fast to describe the sound of their subs.

The former group seems to comprise mostly home-theater enthusiasts and makers of mass-market or “mid-fi” audio gear. The latter group seems composed mostly of audiophiles and high-end audio companies. Which side is right?

A couple of my fellow reviewers have said, directly to me or in print, that when subwoofers are used within their limits, they all sound the same, except perhaps for their deep-bass extension. They have something of a point. After all, who really cares about the “quality” of the depth-charge explosions in U-571, as long as they play loud with minimal distortion and have enough low-frequency content to shake your couch?

But if you put on a recording in which the low bass has specific, deliberately chosen pitches -- perhaps a tune with a melodic bass line, such as Steely Dan’s “Aja” -- you should start to hear some differences among subwoofers. They may be so subtle that you find yourself not caring about them, and that’s fine. Just don’t deny that they’re there.

One key difference among subwoofers is whether their enclosures are sealed or ported, or use passive radiators. Sealed subwoofers are generally considered to have better transient response, which translates to more punch. Ported and passive-radiator subs are generally thought to have better bass extension and low-frequency output, perhaps at the expense of punch and pitch definition.

Of course, there are sealed subs with deep-bass extension and ported/passive-radiator subs with great transient response. But if you carefully listen to a sealed sub and a ported sub that use similar components, you’ll probably hear the difference fairly easily.

Another characteristic of a sub is its Q, or resonance bandwidth. All subwoofers are resonant systems, and its Q tells you how much a sub relies on that to deliver high output. Q is calculated by dividing the resonant frequency by the bandwidth of the resonance (defined as the lower and upper frequencies at which the resonance reaches half-power).

A Q of 0.707 is said to be “maximally flat,” meaning that it will deliver the flattest possible response. A lower Q -- of, say, 0.5 -- will sound very tight, but probably won’t deliver much output or shake; it’s the sound most audiophiles are likely to prefer. A higher Q -- 1.0, say -- will deliver more output and raw bass muscle, but may sound boomy. Q used to be determined solely through acoustical tuning: adjusting the physical characteristics of the sub’s driver and enclosure. While these still play significant roles, most manufacturers now use digital signal processing (DSP) to tune the response of their subs.

It’s easy to hear the difference between subs of high and low Q. Just compare a good small sub from a well-regarded high-end audio brand with one of the small, inexpensive subs that come with 2.1-channel soundbars. The former will probably be a relatively low-Q design that sounds precise and defined, but won’t deliver satisfying oomph when you play hip-hop, rock, or action movies. The latter sub will probably have a higher Q, to get the maximum possible output from its small enclosure, cheap driver, and weak amp. It probably won’t do a good job of defining each bass note in a piece of music, but it should give you a decent sense of shake when you’re watching movies.

Some enthusiasts refer to good subs as being “fast,” and are usually ridiculed for that by other enthusiasts. The “fast” guys are right in the sense that they’re hearing a difference; they’re just wrong about what they’re hearing. The difference isn’t in how quickly a sub’s woofer cone gets moving, but in how quickly it stops. In low-Q subs, the cone tends to stop almost instantly at the end of a bass tone. In high-Q subs, the cone tends to “ring,” or continue moving back and forth after it was supposed to have stopped.

These are the ways in which the “all subs sound the same” guys are wrong. What about the other guys, the ones who talk about subs being “musical” and “tuneful”? Well, they’ve got some things to answer for, too. 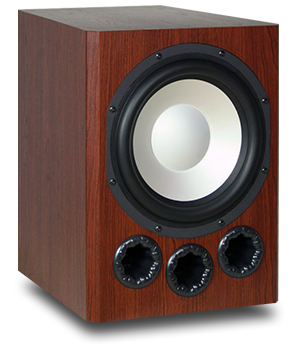 In high-end audio, especially, we often see subwoofers priced very high -- say, $2000 and up -- but equipped with apparently weak components. You might see a high-end sub with a 10” woofer and a 150W amp that costs more than a more home-theater-oriented sub with a 13” woofer, a 1000W amp, and extensive DSP. Ask the maker of the 10-incher why his sub is worth more than the more muscular 13-incher, and he’ll probably throw around some audiophile terms. Like “musical,” for example.

I don’t want to put down all high-end subs, but some output so little deep bass that it’s a stretch to call them subwoofers at all -- “bass-augmentation devices” would be more like it. I’ve tried to be open-minded, and to hear what their manufacturers say I should be hearing. But in my opinion, the best of the subs from the more home-theater-oriented companies (Axiom Audio, Hsu Research, and SVS, to name just a few) are every bit as musical and tuneful and precise as anything any of the high-end audio companies make. And they deliver a lot more low bass.

From what I’ve experienced in listening to and measuring hundreds of subwoofers, the best bass comes from those products that are thoroughly measured, tested, and refined to deliver high output with low distortion, and that are then fine-tuned through listening tests to deliver great sound with every type of material.

Even then, there’s still room for taste in subwoofers. Don’t let anyone tell you different.