The first pair of headphones I ever owned were Sennheisers, back when the German company’s main competitor was the US manufacturer Koss. Many competitors and multitudes of headphones later, I was happy to check out Sennheiser’s Momentum Wireless Bluetooth circumaural (over-ear) model -- noise-canceling ’phones that can be used with or without wires. The noise-canceling feature is always on. The Momentum’s price of $499.95 USD is a bit higher than those of many competing products. There are also Momentum models in an on-ear wireless version, and wired over- and on-ear versions. 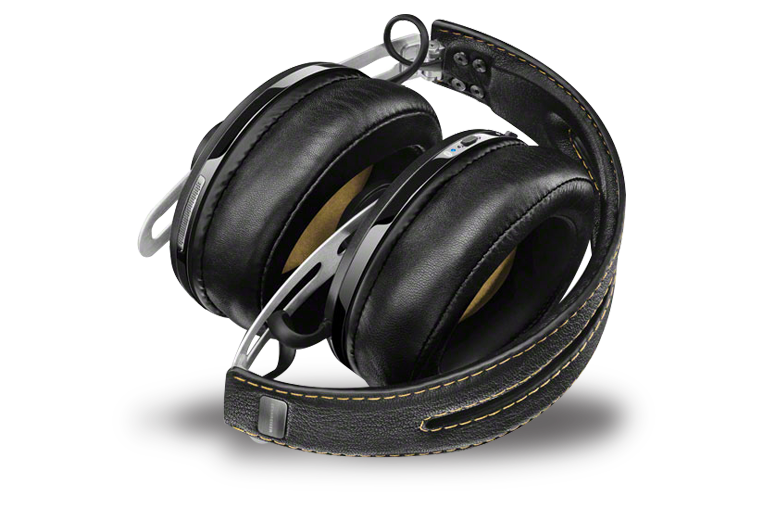 On the box is a seductive, nearly full-size photo of the headphones against a bluish background, and banners of logos and selling points, including the fact that the Momentums can be folded up, and come with a generous two-year warranty.

Inside the box is a half-moon-shaped carrying case of semihard plastic, its yellow stitching matching that on the Momentums’ headband. Everything is inside this case: the headphones themselves in a second case, this one of soft fabric; a USB charging cord; a 1.4m-long cable with a right-angle 3.5mm pin at one end to plug into your device; an airplane-jack adapter; quick start manual; and warranty information.

The Momentum Wirelesses are available in Ivory or Black. They look modern and retro at once, but classy any way you look at them -- right down to the discreet Sennheiser “S” logo on the knurled nuts of the pivots that secure the earcups to the frame. The headband is an open, split design covered in leatherette, the folding stainless-steel arms glisten with strong metallic beauty, and the tightening nuts are masterfully designed: The plastic earcups slide easily up and down the arms, but when the nuts are tightened at your preferred positions, the cups stay put. In fact, everything about the Momentums felt solid as a rock. I wouldn’t drop them deliberately, but I have no doubt they’d survive the impact. 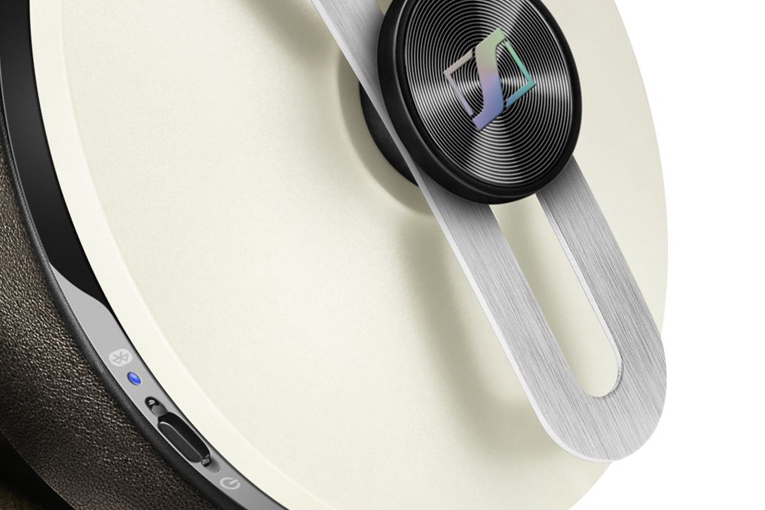 The well-padded earcups are oval to fit over the ears’ pinnae, with exterior dimensions of 2 3/4” x 1/2” x 3 1/2” and inner dimensions of 1 1/2” x 2 1/4” high -- perhaps a bit small. The left earcup has a place for instant Bluetooth NFC pairing and, at the bottom, two nearly invisible rectangular grilles that have to do with microphones for the noise-canceling circuitry. On the outside edge of the right earcup is an on/off pushbutton with an adjacent LED to indicate Bluetooth status, and a single pushbutton for adjusting volume, pause/play, and track skipping. As with most controls of this type, you push once to pause, twice to skip forward, etc. The Momentums’ claimed playing time of 22 hours on a single battery charge makes it unlikely that you’ll often need to check the battery, assuming you charge regularly, but if you push that universal button three times, a woman with a chipper British accent tells you how much playing time remains. She also confirms whatever other adjustments you make. At the very bottom edge of the right earcup are jacks for charging and wired operation.

The Momentums’ weight amazed me. They look and feel so solid, but weigh only 8.8 ounces. Their frequency range is a claimed 16Hz-22kHz. Bluetooth v.4.0+EDRHFP is included, which supports profiles A2DP, AVRCP, HSP, and HFP. The aptX codec is also supported, for better sound with devices so equipped.

The Momentums fit my head comfortably and securely -- a combination that’s not always a given, even with expensive headphones. They worked for me at the gym, but Sennheiser cautions that they weren’t designed for that sort of use, and the materials don’t resist perspiration all that well. The controls worked as they’re supposed to, and my thumb easily found and operated the universal control.

The range of wireless operation was about average. There was no problem so long as I had a clear sight line, but when things were in the way -- walls, bookshelves, cats -- the range decreased from 25’ to about 20’. At first I had a connectivity problem with the Astell&Kern AK Jr portable player in my pocket, but that proved to be the A&K’s fault. There apparently was a stutter problem with earlier samples but Sennheiser has fixed the problem. Something to keep in mind if you’re buying the Momentums used.

The Momentums played moderately loudly -- not as loudly as some other cans I’ve tested this year, but loudly enough without my running the risk of damaging my hearing. Of course, in wired mode you can push them until your eardrums split. At reasonable sound levels I heard no distortion, and the sound was well balanced across the entire audioband, with just a slight rolloff at the top. What I most loved about the Momentums was their transparency -- I could easily hear inner and accompanying voices. The soundstage was even a little wider and the transparency more apparent when the power and noise canceling were on, Bluetooth or wired. The focus and sharpness were a tad better in wired operation. It was like dusting off a favorite album cover and suddenly seeing colors that were already impressive become even more vivid.

The Momentums’ noise canceling was the best I’ve heard. Background noises were all but gone, without seeming to alter the music in any way. It was odd -- close-up sounds seemed to be eliminated almost entirely, while faraway sounds were focused at the very back of my head, out of the way and in the distance. But I quickly learned that if I was listening to the Momentums and wanted to talk with someone, I had to do more than hit Pause. I had to turn the power off, too -- either that, or learn to read lips. 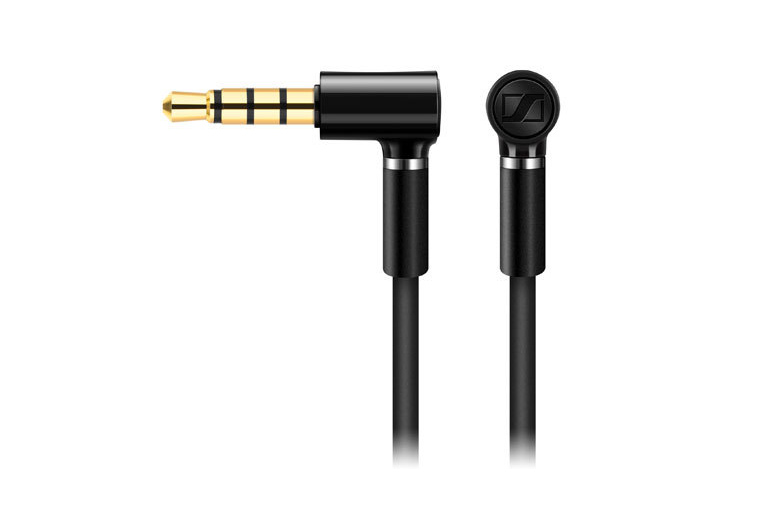 Capitol Records’ Full Dimensional Sound of the 1960s might not have been as sensational as Mercury’s Living Presence or RCA’s Living Stereo, but it often sounded more natural. Erich Leinsdorf’s The Sound of Wagner (16-bit/44.1kHz ALAC, Capitol) has long been a good demo disc, and particularly the Prelude to Act III of Lohengrin. The brass resounded from the rear of the orchestra, and the strings were sweet yet forceful on a wide soundstage that stretched from far left (violins) to far right (cellos and basses). The crashes of two cymbals struck together sounded exactly right through the Momentums, with a beginning percussion transient followed by a ringing swishhhh. The Sennheisers made this short piece of music an absolutely thrilling experience.

“Hello, I Love You,” from the Doors’ Waiting for the Sun (16/44.1 ALAC, Elektra/Rhino), exhibits the immediacy of the era of its creation, and was a great listen through the Momentums. The pithy instrumental licks were left and right, with Jim Morrison’s mellow baritone at the center. At one point, Robbie Krieger’s lead guitar is panned from left to right. Through the Momentums the effect went from outside my left ear to outside my right ear. What great soundstages the Momentums produced -- exciting, and definitely not head-bound. 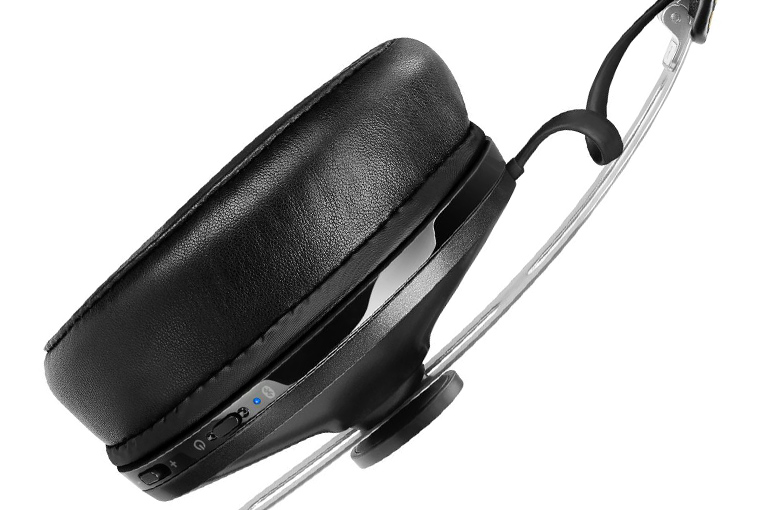 Smaller forces fared well, too. In 1996, Jimmy Webb released Ten Easy Pieces, ten of his songs that were made hits by other singers -- “Galveston,” “Wichita Lineman,” “By the Time I Get to Phoenix,” “The Worst that Could Happen,” etc. -- here performed by Webb himself (16/44.1 ALAC, Guardian/Angel/EMI). The intimacy and presence of this recording were palpable through the Momentums. Every subtlety of voice and Webb’s piano registered, causing me to once again think that this is one of the best albums in my collection. If you want to hear something that will transport you, stick around for the final track, “MacArthur Park,” and Webb’s long piano solo.

But everything sounded great through the Momentums. It was like hearing my music collection all over again, fresh and alive -- different and, most of the time, better.

All things considered, I found the Sennheiser Momentum Wireless noise-canceling Bluetooths the most exciting headphones I’ve heard in a while. They’re easy to fold up and travel with, they work with or without a cable, they come with two cases, hold a battery charge for an incredibly long time, and have a generous warranty. Most important, they sound terrific, with one of the most impressive soundstages I’ve heard, and an excellent noise-canceling system that let me hear my music unmarred by outside sounds. Given all that, the Sennheiser Momentums are very good value for the dollar, even at $499.95.