It had been a while since I’d visited the world of miniature Bluetooth speakers, but this one called to me from the shelf: “I look like a hand grenade. Doesn’t that make you curious?” Well, yes, it did -- and so did the fact that, like most hand grenades, this one is water resistant. But the Philips Shoqbox BT2200 Mini proved to be more than a toy. 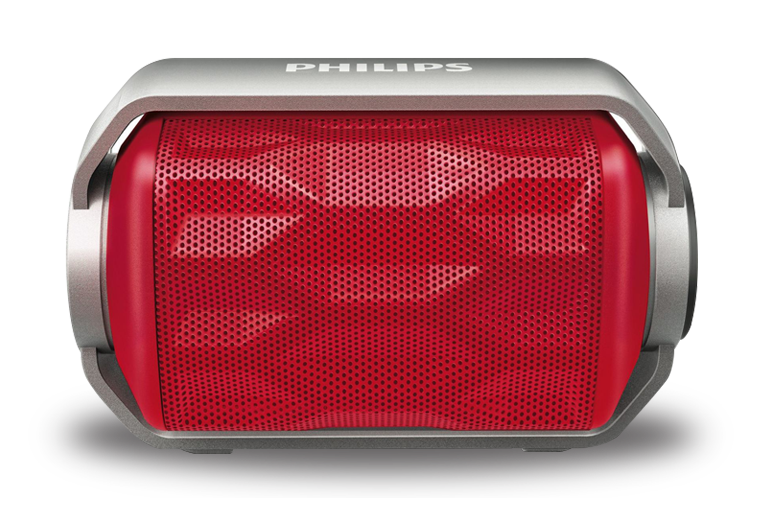 The BT2200 Mini ($49.99 USD) comes housed in a simple yet attractive cardboard box with a soft plastic window. A photo on the back shows water beading up on the BT2200’s surface as on a car windshield treated with Rain-X. On one side of the box is printed this confusing statement: “The body of Shoqbox Mini offers ‘waterproof’ resistance. It should never be immersed in water.” It turns out that the BT2200 is not actually waterproof, but has a claimed water-resistance specification of IPX6 -- not bad, but, while Philips does state that the BT2200 is not submersible, they shouldn’t hint that it might be any sort of “waterproof.”

The BT2200 weighs a mere 7 ounces. It’s a rectangular solid measuring 3.5”L x 2.2” square, with rounded edges and corners and slightly convex surfaces. A combined frame and handle increase the overall size to 4.2”L x 2.7”H x 2.3”D. The frame’s rubberized strips keep the BT2200 steady when it’s laid on its side, and both ends have rubberized caps for vertical placement. Recessed into one of those endcaps are buttons for controlling power on/off and volume up/down, and a Bluetooth LED that’s also a button for pausing play when a phone call is received, when the BT2200 is used in that mode. However, the Shoqbox has no controls for skipping tracks or to pause play. For those and other functions, you must use your connected device. 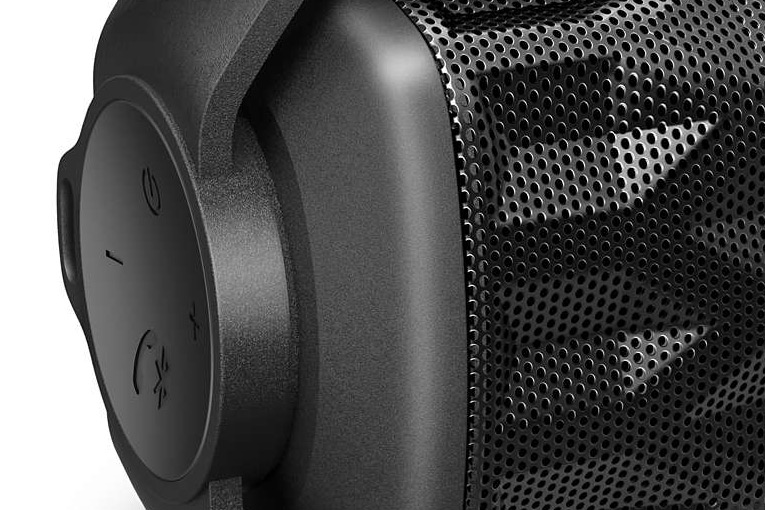 The other endcap pops off to reveal a USB Micro charging port and a 3.5mm jack for connecting non-Bluetooth devices. This end seals securely, to preserve that water-resistance rating. My review sample was all black, with a grayish-white Philips logo emblazoned across the top of the frame. (The BT2200 is also available in red.) The multiple facets of its perforated grille surfaces make the BT2200 easy to pick up and hold on to.

The extras included are few. There’s one of the shortest USB-to-USB Micro charging cords I’ve seen -- it’s just 9” long -- a quick-start instruction manual, and that’s it: no 3.5mm audio cable, and no carabiner or carry cord (though there’s a place to attach them).

The mono BT2200 has a single 1.6” speaker driven by 2.8W of power. Its claimed frequency response is 40Hz-20kHz, +/- 3dB, and its impedance is 4 ohms. It uses Bluetooth v.4.0, and Philips says that its battery, fully charged, will give you five hours of playing time.

Using the Shoqbox BT2200 was an unexpected delight. It felt just right in my hand, and I could easily carry it from place to place. Once I’d found a hook to use with it, it attached nicely to my belt and fit perfectly in the cup holder of a bicycle or car. 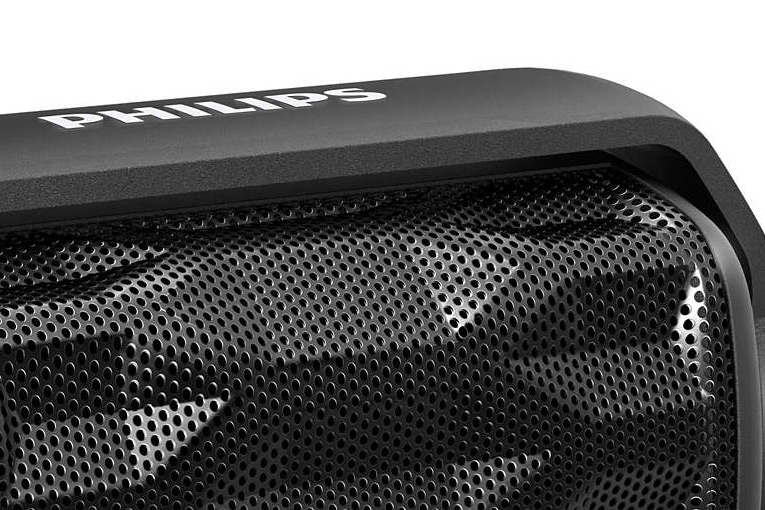 Via Bluetooth, the BT2200 could play indoors at up to 25’ from the source device without dropouts, and outdoors at up to 30’. It paired easily with my iPod Touch, less so with my Astell&Kern AK Jr. When I tried it with a friend’s iPhone, pairing was almost instantaneous.

The BT2200 played much louder than I’d expected it to. In the shower, it easily overrode the hiss of my Oxygenics showerhead, which mixes oxygen into the water. The Shoqbox didn’t produce a lot of bass, but Philips’s anti-clipping circuitry did keep its middle- and upper-frequency reproduction clean as a whistle.

Oddly enough, an album that’s generally considered an audiophile recording popped up on my device’s screen when I turned it on: a London Phase 4 recording of Bernard Herrmann conducting the London Philharmonic in selections from his own scores for the films Jane Eyre, The Snows of Kilimanjaro, Citizen Kane, and The Devil and Daniel Webster (16-bit/44.1kHz ALAC, Decca). The solo woodwinds sound 10’ high, but the approach perfectly captures the unique timbres of the lower registers of the cor anglais and clarinet. Imagine my surprise when the little BT2200 reproduced the sounds of those instruments accurately enough that I could easily hear their tonal differences. This was true of all mid-frequency sounds on whatever recordings I played through the Philips. 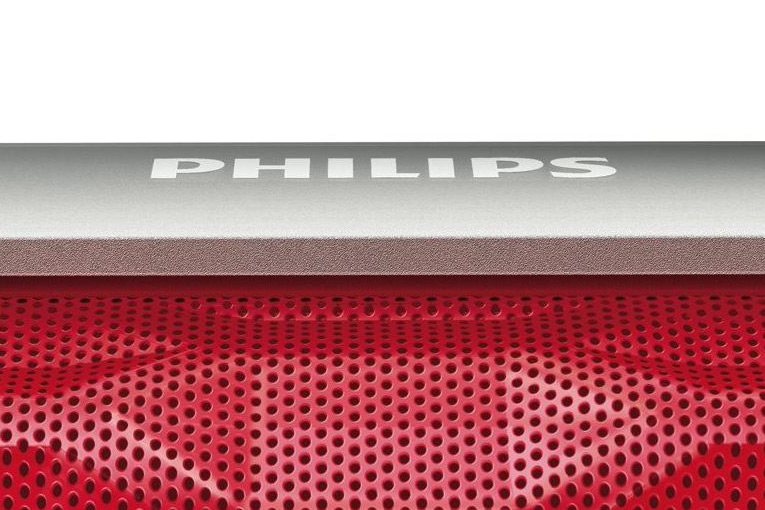 The highs weren’t shabby, either. The cymbal strokes in “Chains,” from Duran Duran’s Astronaut (16/44.1 ALAC, Sony), shimmered with appealing clarity, though the tightly controlled bass in this track was missing in action. I’ve found it best to listen to familiar recordings when using little Bluetooth speakers -- then my brain can fill in the missing bass. That was the case with the bass-shy BT2200.

Jazz recordings such as Dave Brubeck’s Time Out came out very well through the BT2200. The midrange of the piano was solid, and the upper percussion came through with clarity; the warmth of Paul Desmond’s alto-saxophone solos provided welcome contrast.

Although the BT2200 sounded a little better with pop, jazz, and solo instrumental music, some classical recordings really bloomed. Sviatoslav Richter’s version of Grieg’s familiar Piano Concerto with Lovro von Matacic conducting (16/44.1 ALAC, EMI/Warner) sounded larger than expected, the piano solidly there in all but its bottommost octave; the Monte Carlo Opera Orchestra sounded rich, full, and reasonably well defined. Into mono yet?

All in all, the Philips Shoqbox BT2200 Mini, at $49.99, is good value for the dollar. (As I write, Amazon offers it for $47 with free shipping.) If all you need is a little speaker for background music that you can toss in a bag or a cupholder, there’s little to find fault with here. If you need skip forward/back and pause buttons, check out Grace Digital’s EcoXGear line. You’ll pay more, but you’ll get slightly better sound, all the controls you could want, and a higher water-resistance rating.