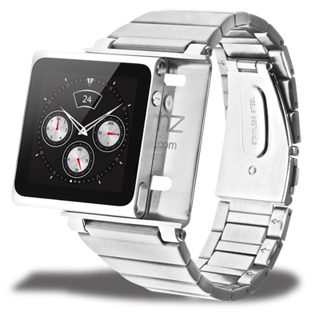 Have you ever seen an accessory so cool that it makes you want to buy the product it’s designed to be used with? There are many fascinating apps that can lure you into the world of Apple. Maybe you never considered owning an iPod Touch, but then you see the free Red Eye app, which turns a Touch into a full-featured remote control. So you buy a Touch. This month’s product is sort of like that.

A year ago, when I reviewed the sixth generation of the iPod Nano music player, I said that I hadn’t yet found a wristband that would hold it securely. Though a Nano looks cool when worn like a wristwatch, none of the bands I’d tried worked well enough. The bare bands that slid between the iPod Nano’s clip and its body left the iPod unstable and subject to all kinds of damage. Other bands had soft rubber skins that you pulled over the Nano, but these weren’t very strong, obscured a clear view of the player, and placed all the controls and outlets in the wrong places.

The geniuses at iWatchz have gotten everything right and designed a perfect accessory to the sixth and seventh generations of the iPod Nano -- a wristband that looks good, fits well, and holds the Nano securely without diminishing its sleek beauty or interfering with the easy use of its controls. It’s a winner all the way.

The original model of the iWatchz had a black band of silicone rubber about 7/8" wide. Instead of holding a watch between its two sides, it has a plastic platform with two slots. This piece is a lot sturdier than it looks. I’ve worn mine for workout sessions over a period of five or six months, and so far there is no visible wear to the band or the platform.

An iWatchz band gives the user an unobstructed view of the Nano, even its back with its iconic Apple graphic. Assuming you wear your Nano on your left arm, the controls will be on the right edge of the Nano, the connection sockets on the left, facing up your arm. With this configuration you can easily run a headphone cord up your arm, where it won’t be much in the way; better yet, you can plug in a Bluetooth dongle, which also will extend up your arm, where it won’t be in the way. The Nano lets you rotate its display 360° -- rotate it 90° and it can be looked at just like a watch. If you want to see the Nano’s clock display every time you touch its On button, you’ll need to go into the Date and Time menu from the General Settings menu and set the Time On Wake to On. (This option’s default setting is Off.)

Wearing my Nano on my wrist, mounted securely in the iWatchz band, I can wake its screen any time to see which song is playing, just as I would look at a watch to check time. And with my Bluetooth dongle, there are no wires -- I can work out at the gym as if I were wearing a watch and enjoy complete freedom of motion while listening to high-quality music files.

What about the seventh-generation Nano?

When the iPod Nano 6 was released, many people complained who had expected it to have video capabilities. (The Nano lets you view still photos, but nothing more.) But after it had been out for a while, people realized that it was one cool little music machine. Apple made few changes for the Nano 7. In fact, an online upgrade will turn your 6 into a 7.

The biggest change for many will be the new, lower prices. Next will be the 18 different clock faces, which range from a standard sweep hand to cool analog variations (in one, you can see gears turning), to four digital faces and four iconic faces, including Mickey, Minnie, and Kermit. The icons are now larger, taking up nearly the entire screen; if you don’t like them, there’s an option for small icons. The rest of the changes are refinements. There are more options in the Fitness menu, where you can set a "Power Song" as well as your daily walking goal.

With the iWatchz clip established as the best way to house an iPod Nano 6 or 7, iWatchz has dramatically expanded its offerings, adding several lines of bands in leather (Force, Icarius, Vintage, Timepiece) and even stainless steel (Elemental). Plastic clips are now used only in the Q line; the rest have aluminum or stainless-steel clips, and each line is available in different colors to match your Nano -- or, if it’s the watchband itself that has lured you into Nanoland, you can buy a Nano to match it!

The combination of iPod Nano and iWatchz wristband is one of those occurrences where an accessory can actually add value and use to the product it’s designed to enhance. You can wear your Nano as a watch, which just looks darned cool to begin with. The Nano will store files of better quality than MP3. All of my 575 songs are Apple Lossless at minimum, and some are AIFF 24-bit/48kHz. You can use the Nano’s music library to listen while you work out, while you’re walking -- in fact, while you’re doing almost anything. I plug my Nano into my car’s audio system, and if I want to listen to the Nano’s radio, I just plug in wired headphones, which act as an antenna. The iWatchz band has made my "Music Everywhere" experiences more easy, fun, and stylish. This combo rocks.