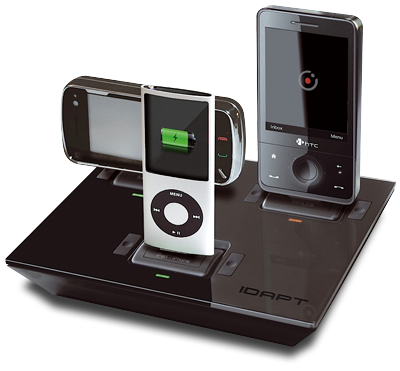 A little over a year ago, I discovered the IDAPT i3 universal charging station. The IDAPT i3 made it possible for me to charge my phone, my Apple iPod Touch, and iPod Nano at the same time, quickly and easily. I got in the habit of docking all of them before I went to bed each night.

The IDAPT i3’s interchangeable cartridge tips let you dock any model of portable device. If you don’t need a mini USB, push the two release buttons to pop that one out and snap in the one you need. IDAPT swears that its dock is compatible with over 4000 different devices -- more than I even knew were being made! If you buy a product with a new type of plug, you can order a new tip, confident that IDAPT is keeping up so that its charging stations will never become obsolete.

But the IDAPT i3 is small -- only 6.75”W by 1.5”H by 5.5”D -- and I couldn’t park my rather large Bluetooth speaker or Bluetooth headphones on top of it. That’s where the new IDAPT i4 ($59.99 USD) comes in. Like the IDAPT i3, it has three docks on top, but also a USB port on the side, into which I could plug the USB cord of either of my oversized components.

The IDAPT i4 is available in black, white, or gray. Its top surface is covered in a piece of clear, solid plastic that gives the color you choose a mirror-like shine, and four rubber feet keep it from scratching surfaces. The i4 comes with an AC cord, and a set of six tips configured for the most popular portable models: iPod/iPhone, mini USB, micro USB, Sony Ericsson, Nokia, and Samsung. Additional tips can be bought separately, but if you buy your unit directly from IDAPT, you can get four tips of your choice instead of the standard assortment of six. This would make sense if you have multiple devices requiring the same type of socket; otherwise, you’d get only one useful tip in the standard six-pack. Also included are an IDAPT brochure and a simple instruction book in five languages.

Setting up the IDAPT i4 was a snap. Just plug its cord into the wall, select the three tips you need, pop them in, turn it on, and you’re ready to charge. A few new features distinguish the i4 from the i3. The new model has an on/off switch that is discretion itself -- it’s seamlessly molded into the plastic cover plate. LEDs tell you whether your phone or other device is fully charged (green) or charging (red). The latter feature worked well with my iPod Nano and Samsung phone, but not with my iPod Touch; the LED remained red even after the Touch had been fully charged. When I contacted IDAPT about this, refreshingly enough they acknowledged the error, saying that for some iPods and iPhones the light wouldn’t change to green, but that the device was not being overcharged. They’ve since corrected the problem, and anyone who has ordered an i4 directly from IDAPT can exchange it for a new one. From reading this review, you’ll also know to ask when you order! If you don’t have an iPhone, iPod, or Touch, it won’t be an issue. The side USB port, by the way, has no charging LED; that’s not really a problem, but it would be good to see one on future models.

Some have criticized the IDAPT because its fully exposed tips must support the weight of a device plugged into them. I found the full exposure a blessing -- I can plug in all of my devices without having to remove their protective cases. I just have to be careful to seat the device correctly and push it down gently -- not hard to do. I’ve been plugging in and unplugging my Samsung cell phone every day for a year with no wear or damage to phone or tip. But you wouldn’t want to do this with one of the larger iPads; for that, use the USB port and a cord.

The i4’s cartridge tips fit into their sockets only one way; this was done to ensure that every device is charged with the correct polarity. It can be a bit of an inconvenience if one of your devices must face backward when plugged in. None of mine had that problem, and remember: Because you can insert any tip in any socket, to some extent you can arrange the i4’s working surface to suit your needs.

Some other docking systems, including those from Powermat, have a charging mat -- to charge your device, you just lay it down on the mat. But to do that you have to put your device in a special case that’s bulkier than one you’d want to use every day. That would then involve removing and replacing a case every time you used the device.

I found the IDAPT i4 much simpler -- a perfectly neat and organized way to keep all my small wireless devices charged and ready to go. If you don’t need the USB port, IDAPT still makes the three-port i3 and two-port i2 models. Any of them would make a fine stocking-stuffer -- assuming you can find a stocking wide enough. An IDAPT can rapidly become an indispensable piece of equipment for those who like their music everywhere.