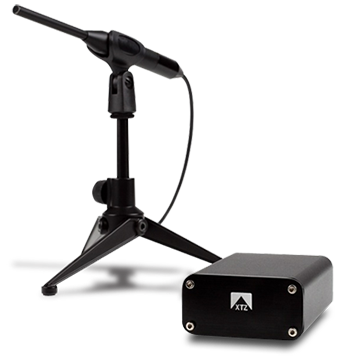 Surely all of our knowledgeable readers will know that the name Dirac is intimately connected with Nobel-winning physicist Paul Dirac and the experiment whose acronym spells his name: the DImeson Relativistic Atom Complex. As explained at http://dirac.web.cern.ch, the DIRAC experiment uses “a precise magnetic double arm spectrometer, installed in the high intensity proton beam of the CERN Proton Synchrotron,” to simultaneously “measure the lifetime of [π−π+] atoms . . . to observe [π−K+] & [π+K−] atoms . . . and then to measure the [πK] atom lifetime.”

I don’t understand any of that either, but apparently folks who are into quantum mechanics and quantum field theory fully understand Dirac’s incredible gifts as a theoretical physicist and the vast usefulness of his vita opus: the singular delta function. I dropped Physics 101 to avoid a failing grade, so none of this makes sense to me. My field was psychology, and what all this scientific talk means to me is that the guys who named their product after Professor Dirac have giant cojones. That’s a clinical term for folks who dream big.

But for our purposes, Dirac is Dirac Research, makers of the Dirac Live Room Correction Suite, or Dirac Live RCS ($850 USD), a complex software system of measurements and corrections aimed at removing the sonic influence of your room through the use of intricate algorithms that measure phase, distance, and frequency response. Once these are measured, the system creates a mirror image of your problematic areas, to equalize the distance, flatten the frequency response, and optimize the impulse response. At least on the surface, with one main exception (see below), Dirac Live RCS seems similar to Audyssey’s vaunted software, though neither company is forthcoming about the details of its procedures.

Dirac Live RCS has two main elements. The Live Calibration Tool takes measurements following a set of instructions very similar to Audyssey. You set up a calibrated microphone (not supplied, but Dirac recommends a kit for $150) in a series of positions. This part is much more detailed than Audyssey’s procedure: You move the mike up and down, back and forth, all over your preferred listening area. The designers provide a three-dimensional map so that you know precisely where to place the mike for each reading. 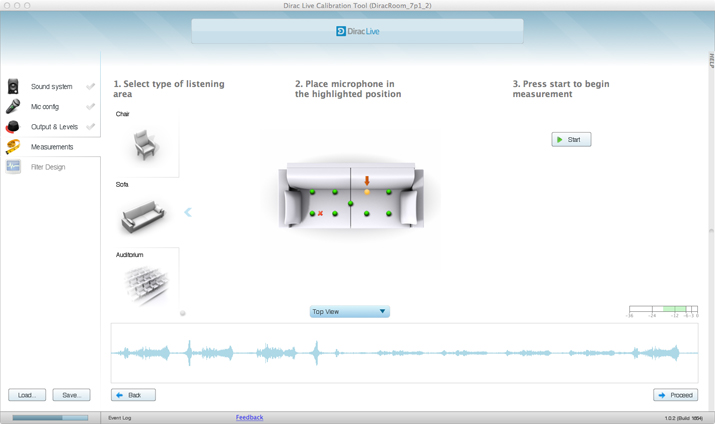 Live Calibration Tool offers you three options: Chair, Sofa, or Auditorium. Under the assumption that you probably listen to your computerized sound system from a chair, you might select that as your model. What I found is that the larger the model you select, the more subtle the fix. I also found that the Chair setting is for folks who prefer their listening in the iron-vise position -- you know, the old torture device that doesn’t let you tilt your head even a quarter inch. The reason is, the settings are quite tightly done. Though Chair absolutely does result in the best sound, it also means you can’t move.

The Sofa setting also improves the sound a great deal, just less than Chair. I move around all the time while working on my computer. So I changed the measurements, pretended I was sitting in something bigger than a chair but smaller than a love seat, and extrapolated the locations to situate the microphone. This gave me the best combination of improved sound and room to move.

After Dirac Live RCS takes the measurements and crunches its numbers, it generates a response curve showing you what’s happening in your room. It came as no surprise to me that my system had a vicious hump from 80 to 120Hz. Dirac Live RCS’s next step is to run its filter-design algorithm. You get the opportunity to see your current conditions, then a representation of what it will look like after the filters are applied. Dirac Live RCS aims not for a flat response but one that gently slopes down a total of about 2-3dB from the bass to the treble. If you feel you have a better idea of how it should look, you can draw your own response; Dirac Live RCS will then provide and apply the exact filters you need to achieve that response. 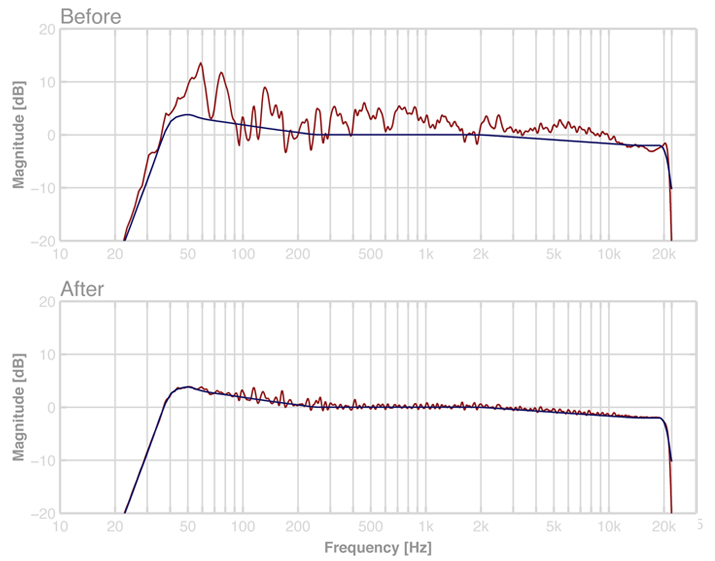 If you hope that Live RCS will make it possible for your $49/pair desk speakers to reproduce a thundering 30Hz note, forget about it. The Dirac system does miraculously improve your system’s sound, but, as Paul Dirac would doubtless explain, physics has its limits. Low frequencies have wavelengths longer than your listening room, and asking a 4” “woofer” to reproduce them is absurd. What Dirac Live RCS does do is tidy up the frequencies you have.

The second major part of Dirac Live RCS is its Audio Processor. This is where you store your curves. If you occasionally switch from Skrillex dubstep to late Impressionist piano and want a tetch more bass for the former and more clarity for the latter, Dirac Live RCS offers slots for four custom presets. I just used one preset for everything. It seems to me that a really good system should sound equally good with every type of music.

In effect, the Audio Processor becomes a pseudo soundcard. (I hate that term. My “soundcard” is a 1U rack-mount monster.) You simply go to the menus of your computer where you would select your default Playback Device. In my case, that included the Control Panel/Sound/Playback tab for most things coming through Windows. For Media Monkey -- the best device for music playback I’ve found, bar none -- I go to Tools/Options/Player/Output Plug-ins/ASIO/Configure. Then you select Dirac Live RCS Audio Processor. That’s the process.

The first song I tried was not some audiophile demo disc but just what I was listening to at the time: “Sparks Fly Again,” by Beechwood Sparks, a song I’ve listened to at least 50 times on various systems. From the beginning, the guitar notes had more natural presence, and the kick drum sounded like a kick drum; but most important, the voices took on body and place. At precisely 2:02 into the song, the group goes into a Dead-like trance section with rolling bass and toms, and the massed voices sounded real. Admittedly, I pay attention to subtleties, but I was elated. My system had never sounded so good. 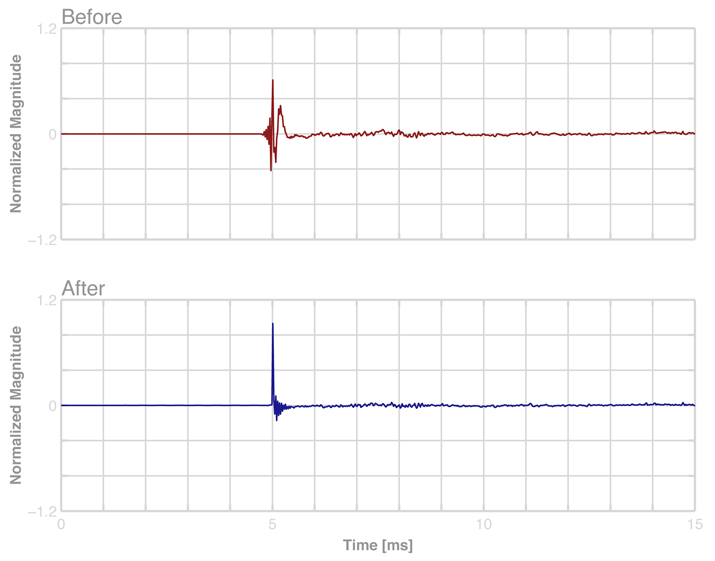 Then I listened to a few audiophile standards. Two British high-end-audio manufacturers that also run record labels vie for most space on my hard drive: Linn and Naim. Linn’s Studio Master recording of John Butt and the Dunedin Consort performing J.S. Bach’s Mass in B Minor is a standard for me. Dona Nobis Pacem was hair-raising, the Dirac Live RCS adding substantial amounts of clarity and soundstage reality. Naim’s release of William Fitzsimmons’ Derivatives had never interested me until I heard it through what Dirac Live RCS had done. Suddenly, I couldn’t stop listening to the George Raquet remix of “I Don’t Feel It Anymore,” with Fitzsimmons breathily declaiming the end of the romance, and the feather-light voice of Priscilla Ahn singing, “I want back the years that you took when I was young.” Goose-bump city.

Dirac Live RCS worked just as much magic with a Web browser. Checking out the latest from KCRW’s brilliant lineup of recorded music, I stumbled on Ultraísta’s “Bad Insect,” from Ultraísta. Being able to watch drummer Joey Waronker and feel his drums at the same time added to the magic. Radiohead producer and bass player Nigel Godrich lays down an awesome low-end pulse, while Laura Bettinson’s voice came through with human texture.

Early on, I hinted at an exception to the similarity of Dirac Live RCS to Audyssey MultEQ XT. My guess is that the reason for the solidity of images through the Dirac has to do with Live RCS’s mixed-phase filters. Basically, it applies delayed correction to various frequencies with the goal of making your speakers approximate a point source. This is what gives dimensionality to instruments and voices, for those who pay attention to the intricacies of sound and music.

My one big gripe about Dirac Live RCS is having to pay another $150 for a microphone that’s otherwise useless. Why not use a well-known mike with a consistent frequency response, such as a Shure 57 -- a model you can rent in most towns? Even if you have to buy one, it costs less than $100 -- and then you have a useful mike for any recording you might want to do.

That caveat aside, I found Dirac Research’s Live RCS every bit as useful for a computer-driven audio system as Audyssey’s softwares are for home theater. I can’t foresee ever again using my computer system without Dirac Live RCS -- unless someone comes out with something better. If this is starting to sound like a rave, then so be it. Live RCS is one of those very few products that has given me an entirely new music collection.

Is Dirac’s Live RCS good enough that you can save money on the rest of your system? Can you skimp on a soundcard or speakers and count on the Live RCS to fix everything? That’s what I’ll look at next month, in Part Two of “Computer Audio Finds.” In the meantime, for an Ultra Audio view of computer-based music systems, check out Jeff Fritz’s editorial.