Oppo Digital has mastered the fine art of juxtaposition, steering a perfect course between value and luxury. Oppo products are bulletproof, yet, at any hint of a problem, customers gain immediate entrée to one of the best tech-support departments in all of consumer electronics. Perhaps best of all, despite the fact that their products come to market designed with exceptional intelligence and fully formed, the engineering staff never stops soliciting feedback from their dedicated clientele. They then use that feedback to make something remarkable even better. Their payoff is a reputation that’s at the pinnacle of the home-theater business.

So when a new box shows up from Oppo, I feel something similar to what my wife feels when she receives a nice blue box from Tiffany’s. The BDP-103 itself is jewel-like, and its packaging is better than that of many electronic devices costing five times its price of $499 USD. Everything is safely secured in place. Instead of the normal plastic bag stuffed with shoddy penny-ante stuff aimed at getting you by until you can go to Best Buy, Oppo includes a good-quality, three-pronged detachable power cord, a 2m HDMI 1.4 cable, a 4.5’ USB extension cable, a USB Wireless-N adapter, a well-thought-out remote control, and a 92-page manual evidently written by someone whose first language was English. Before you’ve even installed the BDP-103, you know you’re in the presence of something special.

For those new to the world of Oppo, their Blu-ray players have sailed through five iterations. Numbered in order of release, the BDP-83, -93, and -103 have offered great value, and performance that wilts the competition. For those happy in the Pepperland of self-imposed analog, the BDP-95 and brand-new BDP-105 offer dramatic improvements over their sister players in what comes out of their rear-panel RCA jacks, but the BDP-103 is a true universal player. The only formats it won’t play are dead (HD DVD, cartridged Blu-rays), and it will play only Region A BDs and Region 1 DVDs. Luckily, for those of us who love foreign films, it can handle NTSC or PAL.

What do owners of earlier Oppo models get for moving up to the BDP-103? Oppo is touting the player’s ability to upscale any video signal and send it through its HDMI outputs at 4k (i.e., 3840x2160). You’ll also be able to convert a normal 2D image to quasi-3D. Most manufacturers’ conversions still look flat, or at best like the cardboard boats in a puppet show. Oppo’s looks better than that because they give you more control over the internal settings, but don’t expect anything like watching Hugo in a 3D IMAX presentation. Oppo has also added a dual-core system-on-chip processor that speeds up disc loading. 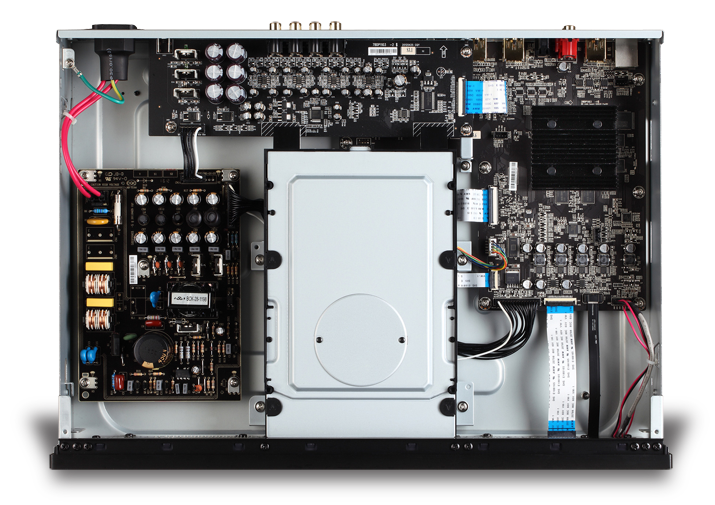 Two other additions make it worthwhile for me, in particular, to upgrade to a BDP-103. I’m most excited about its multiple HDMI inputs and outputs. The inputs let you use the Oppo’s superior decoding with older HDMI-equipped components, but even more important, the front HDMI input is also a Mobile High-Definition Link (MHL). That means you can hook up a mobile phone or tablet that supports MHL and send video to your big screen while charging the device at the same time. The multiple HDMI outputs let you drive a second-zone TV, or simultaneously drive a monitor’s video and a receiver’s audio.

The other major change is for those of us suffering from designeritis. The Oppo BDP-93 was even sleeker and more modern than the BDP-103. They accomplished this feat by making all the buttons so perfectly flat that they all but disappeared into the faceplate. It looked great, but I had to use a flashlight to find the controls -- which meant I always used the remote. The buttons on the BDP-103 have a tiny indention, making them easier to find. And as soon as they’d fixed the visibility problem, Oppo forever fixed all control issues by offering a nifty app for both iOS and Android, to replace your remote. Between DISH, Oppo, Onkyo, and Roku, I can now control the vast majority of my system from my iPhone or iPad. I love progress.

A small Thank You to whoever at Oppo decided to pony up to buy a license for Gracenote, the service that gives you all sorts of information about the CD you’re listening to. Most products that offer this service rely on a free alternative, usually freedb. I’m so tired of the problems with freedb -- missed albums, incorrect information, and, especially, small and blurry images of album-cover art -- that the automatic default to Gracenote feels like a blessing.

On top of all this, the BDP-103 has a volume control, onboard audio and video decoding, and the ability to set up a 7.1-channel speaker system. Add the multiple HDMI and digital audio inputs and the 7.1 audio outputs, and you could squeeze by without a receiver. Although I wouldn’t want to live without Audyssey, the fact that the BDP-103 has everything you need to take the place of a receiver is another example of Oppo’s largesse.

This covers just a smattering of this player’s capabilities. Oppo’s website has an excellent rundown of all the BDP-103’s features, and I highly recommend that anyone contemplating a purchase read it. Bottom line: The BDP-103 can play and/or decode almost any signal you can send it. Oppo has also spent R&D money on taking the player beyond silver discs and making it even more universal by giving direct access to DLNA, Vudu, Netflix, Film Fresh, YouTube, Pandora, and Picasa. If you want more channels, you can always add a Roku Streaming Stick.

Installation is a breeze. The owner’s manual covers every possible wiring setup, and the device walks you through a few questions about your system. There’s just one area I’d like to see clarified, and that’s Internet connection. The folks at Oppo were kind enough to include a wireless adapter with the BDP-103, and I’m certain they spent a decent amount of money to give buyers a good one. Still, do whatever you can to make sure you can hardwire it with an Ethernet cable. The Oppo can suck a massive amount of bandwidth, so you want to feed it well.

The BDP-103 is so easy to use that you might be tempted to just start it up and let it roll. Don’t. Even if you’re a member of the Anti-Instruction Manual Coalition, read this one. It’s cogently written, by a real user, and loaded with tips that will absolutely make your system work better. We’ve all had our fill of manuals badly written by people who’ve never even seen the item described. This one is the polar opposite. Every page, almost every paragraph, contains important and useful information. Do yourself a favor and set aside enough time to read it cover to cover.

As for performance, I’d love to describe some earth-shattering revelations laid bare in the BDP-103’s operation and expose its complete superiority to the BDP-93. I can’t. If you’ve experienced the BDP-93, you’ve seen Marvell’s Kyoto-G2 video processor with the second-generation Qdeo technology. Moving up to the BDP-103 gives you Marvell’s Kyoto-G2H video processor with the latest-generation Qdeo technology. Both look near perfect to me. I would hate to have a gun pointed at my head while I tried to pick out differences. There aren’t that many.

One area where Marvell claims major advancements have occurred is in the playback of DVDs. In that case, Marvell Qdeo handles the upconversion to HD or Full HD. Marvell’s website states that chips using Qdeo have three purposes: noise reduction, format conversion, and enhancement (of contrast, to give the picture greater depth). I congratulate all of Marvell’s R&D team on a job well done. Qdeo is still just as good as it was in the BDP-93.

Still, I wanted to check a few good discs to see how well the BDP-103 could cope with difficult video. As always, I began with chapter 10 of Austin Powers: The Spy Who Shagged Me, which includes multiple pans across a railing’s vertical balusters with, to make it a true torture test, horizontal lines flashing in the background. Plus, the best shape of all: Heather Graham sliding slowly down the fire pole. The Oppo looked great.

We watched Avatar to check out the BDP-103’s 3D abilities. The depth of field on the planet Pandora was spectacularly realistic. Scenes in the lab had a very lifelike look -- not quite real, but close enough that I wanted to reach out and touch someone, or some thing.

If you’ve seen the Blu-ray of David Gilmour: Remember That Night, I won’t have to describe the vivid cinematography or its spectacular Dolby TrueHD 5.1 surround sound. In “The Blue,” my pick for Gilmour’s best song since Pink Floyd stopped making records, check the ear-caressing sound as he works magic with a DigiTech Whammy pedal, sending notes that are already up around the 22nd fret off into aural dreamland. But what really caught my attention were the occasional explosions of bass from Richard’s Wright’s synthesizer, things I hadn’t noticed until listening through the BDP-103. Gilmour performs “Echoes,” my all-time favorite Pink Floyd song and something the band hasn’t done on commercial video since Live at Pompeii. On other recordings, the song drops into a psychedelic noodlefest midway, then pops back into the tune around the 15-minute mark. Here that occurs 15:20 into the song, where Wright’s deep bass makes it into a right proper explosion. Gilmour fans will be most excited by this version of “Comfortably Numb.” Among avid electric guitar players, Gilmour’s solo is often mentioned as the greatest guitar solo of all time (along with Jimmy Page’s on Led Zeppelin’s “Stairway to Heaven” and Eddie Van Halen’s on “Eruption”). Here, he really rips into it. But again, I noticed Wright doing something I hadn’t heard before. Beginning at 5:40 and lasting until about 6:15, I heard Wright’s bass synth waves positively crash past Guy Pratt’s bass guitar. I don’t know why I hadn’t heard that before, but if your system has top-notch resolving power in the lowest bass, you’ll hear it clearly through the Oppo.

Everything looked and sounded so good that I began wondering what was the most expensive silver-disc player I’d ever reviewed. That turned out to be Ayre Acoustics’ D-1x, which I covered ten years ago. It cost $11,500, and not only did it win a coveted Reviewers’ Choice award, it was also Home Theater & Sound’s Product of the Year for 2003. That we can now buy such a great piece of technology for $499 helps prove that Gordon Moore was right.

Still, you’ll occasionally hear this gripe: “Over at [other places where such things are reviewed], they say I should buy the Panasonic DMP-BDT220, and it’s less than $100! Why should I spend five times that much?” These are folks who’ve never owned an Oppo. Once you have owned an Oppo and experienced its flawless accuracy, owning and using one will make you feel you’ve done yourself a favor. And once you’ve called Oppo’s technical support line to ask for help, you’ll find out that the quality of the people at the other end of the line speaks volumes about the company’s core values. For example: When a customer needs help, you help them. Period. You will never hear, “We can’t help you. It must be the fault of your receiver.”

An automotive analogy: I’d rather have a BMW 335i than one of its competitors. Yes, it costs more, but the BMW is a benchmark for some of the same reasons the Oppo BDP-103 is, the main one being that it is designed so seamlessly. Driving the 335i, I stop thinking about its engine and suspension and start looking for twisting roads. Using an Oppo, I stop thinking about my electronics and start looking for more movies to watch. The Oppo BDP-103 is a Reviewers’ Choice product -- and I wouldn’t be surprised to see it mentioned next January, when the 2013 SoundStage! Network Product of the Year awards are announced.