"Singin' in the Rain" 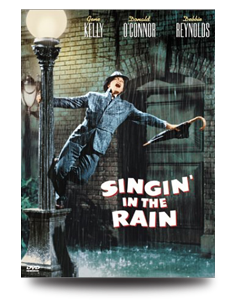 Don Lockwood (Gene Kelly) and Lina Lamont (Jean Hagan) are the biggest stars in Hollywood during the silent-film era. Good looks and passable pantomime are all it takes to be a star -- that and studio backing. Then The Jazz Singer changes everything. Chaos. Everyone wants to see Don and Lina in a talkie. The problem is Lina’s voice sounds like the squeal of worn-out brakes on a Yugo and her accent is that lovely amalgamation of dialects from the southern part of Elizabeth, New Jersey. The studio knows they just can’t let the public hear how bad she sounds. The answer is simple: hire someone to be Lina’s voice. Enter Kathy Selden (19-year-old Debbie Reynolds in her breakthrough role). But Lina (who is so dumb she believes she and Don are engaged because she read it in a gossip column) wants to use her own voice. In the meantime, Don has fallen in love with Kathy. Will the picture be made? Will the boy get the girl?

What makes it great?

Singin’ in the Rain is widely considered to be the best musical ever made and one of the best movies ever made. There is a multitude of reasons, but let’s start with the story.

This is a classic boy-meets-girl-and-falls-in-love chronicle. It’s as old as the hills, but somehow we never seem to tire of love stories. Thankfully, Green and Comden (writers of On the Town, Auntie Mame, and The Band Wagon) know that the most important part of a love story is the background it is played against. From little movies like Harold and Maude to blockbusters like Titanic, the thing that gives life to a love story is its context. The Hollywood of Singin’ in the Rain not only provides a perfect backdrop for the love story, but also offers a lot of fodder for comedy. And what movie fan doesn’t love an inside view of the whole process of filmmaking?

The story also presents a sweet-hearted type of humor, one that focuses on the foibles we all share -- our need to be important, respected, loved. It’s about the disconnect between the way we view ourselves and the way we are seen by others and our fears that our weaknesses will be visible to the world. It’s about business people so silly that they pick buggy whips over horseless carriages or silent films over talkies. Mercifully, it is definitely not about irony. 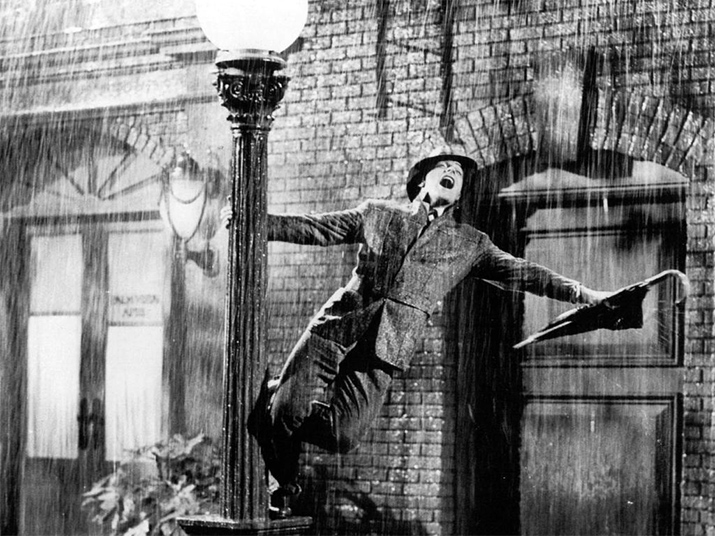 The next feature that makes Singin’ in the Rain so important is the dancing. The title song is surely the most famous dance scene in all of cinema. You’ve seen it, so I won’t describe it. But here’s some interesting trivia about the filming. It starts in chapter 40. Kelly had a 103-degree fever from flu the day he did the "Singin’ in the Rain" song and dance. Next time you’re sick, watch the movie and picture yourself trying to do what he’s doing with a high fever. On top of that, to make sure the camera picked up the rain, they mixed a little milk in it. Imagine the smell of rotting milk under the Klieg lights. Then to cap it off, Kelly was wearing a wool suit. You know what happens when you mix wool and water? The wool shrinks. Watch the scene again. Any giveaways? I can’t find them.

Go next to chapter 21. The number is called "Make ‘em Laugh." Donald O’Connor, an absolute comic genius, runs up the sides of walls, dances with dummies, gets knocked around, and generally abuses his body, all in the name of getting some laughs. And he does. 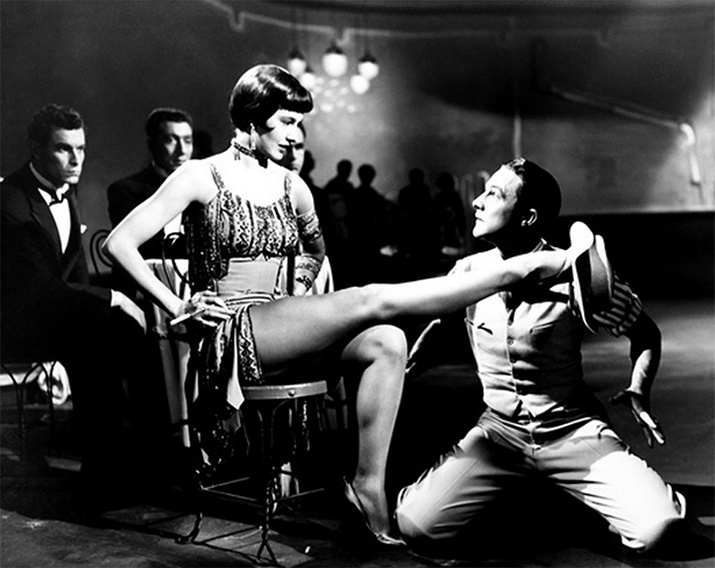 The big set piece is called "Broadway Melody" (chapters 43-50). It is a 14-minute tour de force telling the story of a boy coming to the city because he’s "gotta dance." This is the film breakthrough for Cyd Charisse (real name Tula Ellice Finklea . . . see why she changed it?), who does the sexiest dance you’ve ever seen where the clothes remain on. Watch her starting at chapter 45 for a look at what was termed "the best legs in Hollywood." Note the way she exudes feminine libido without ever doing anything bawdy. See how she can do a sexy slink and still leave you knowing she’s in charge and in control. Fred Astaire called her "beautiful dynamite." She’s my personal pick for the most erotic dancer ever to grace the screen. And this is the role that made her a star. Especially amazing is she was about 4" taller than Kelly, plus she was wearing 5" heals. She still manages to contort her body in full-frame shots to look shorter than Kelly.

Kelly directed all of the above mentioned dance scenes. But the rest of the film was directed by 27-year-old Stanley Donen (Charade, Two for the Road, Bedazzled, and my guiltiest of pleasures, Blame It On Rio). Remember the rule that when one actor is great, it’s the acting . . . and when all the acting is great, it’s the directing. All the acting in Singin’ in the Rain is fabulous. Donen was clearly a terrific director even at a relatively young age. A good example is in chapter 6 where Don explains that his motto is "Dignity, always dignity." Donen then uses flashback to show how Don wants his audience to believe an image that just isn’t true, but he does it in a way that affectionately pokes fun at an actor’s ego. In chapter 26, Donen gives us a montage of the entry of sound and music into film. The result is something far more LSD-like and trippy than most of the so-called drug movies of the 1960s. Note his choices of camera angles, colors, and sets. It’s pure ability on display.

The final aspect that makes Singin’ in the Rain great requires a little explanation. In 1974, the film That’s Entertainment filled the theaters with patrons tired of Vietnam and Nixon and the attendant internal strife in the U.S. The ads ended with the lyric "the world is a stage, the stage is a world of entertainment." Then they capped it with a spoken "and boy do we need it now." Before September 11, I was growing weary of Hollywood’s reliance on irony. After September 11, I have come to be sick of it. This was really driven home when I watched Snatch, a movie that asks us to unthinkingly laugh at scenes of sadistic violence in the name of irony. Dependence on this type of humor is the plaything of small minds just discovering the onanistic and smug joys of confusing their own brains. Now, more than ever, I appreciate a film that makes me laugh about sweet things, where a tugged heartstring or a stepped-on ego is about as violent as it gets. That Singin’ in the Rain adds art, intelligence, and some great music is frosting on the cake. And boy do we need it now.

So how about the DVD?

Singin’ in the Rain was originally released in Academy Ratio, 1.33 to 1, just like an old-style TV set. The big, widescreen pictures were developed to lure people away from TV, and in 1952, movie moguls just weren’t yet worried about the competing medium. Fortunately, Hollywood had moved to the use of modern color techniques. So while it may not be widescreen, it is a bright, vibrant, and beautiful picture, heavy on the primary colors. The colors pop off the screen with no blooming. The sound has been remixed to 5.1, which would normally bother me. However, the music tracks existed in multitrack form, so there is some benefit to the sound during the musical numbers. Warner Home Video is stingy on the supplements. Prior releases on laserdisc had documentaries, outtakes, deleted scenes, and commentaries. Here, we get a trailer. That’s it. Hopefully, Singin’ in the Rain will be slated for a deluxe release in the near future.

There was also a prior release on DVD from MGM Home Video, since withdrawn. If you find a used copy of the older version (see illustration right) avoid it like the plague. Compression artifacts make the colors look like they are floating on the screen separate from the picture. Opt for the re-done 2000 release (picture at the top of the article), which has fewer problems.