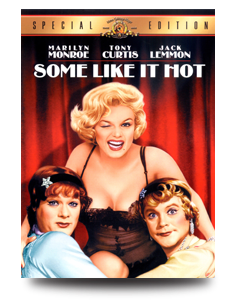 Cross-dressing musicians hunted by the mob

Sax player Joe (Tony Curtis) and bass player Jerry (Jack Lemmon) are Chicago musicians in a prohibition-era speakeasy. After witnessing Spats Colombo (George Raft) murder a squealer, they have to run for their lives. But the only jobs available during the hard economic times are for a couple of girl musicians in Florida with Sweet Sue and her Society Syncopators. The solution (isn’t it obvious?) is for Joe and Jerry to become Josephine and Daphne and get out of town. As they are boarding the train, with one of the hottest entries in movie history, in slinks the perfectly named Sugar Kane (Marilyn Monroe). Daphne whispers to Josephine, "Look at that! Look how she moves! That's just like Jell-O on springs. Must have some sort of built-in motor or something. I tell you, it's a whole different sex!" And she is hot! Unfortunately, she has a penchant for sax players who steal her money and her heart. She has vowed to look only for rich, bookish guys who will treat her right.

Once they arrive in Florida, Joe adopts the identity of Shell Oil heir Junior Shell to woo Sugar. In the meantime, Jerry/Daphne has started a relationship with Osgood Fielding III (Joe E. Brown), an oft-married, philandering momma’s boy with a boat full of dough. Daphne seems to forget that she’s a he and becomes smitten with Osgood, who proposes marriage. Daphne accepts. Joe is stunned.

Joe: You're NOT a girl! You're a GUY! Why would a guy wanna marry a guy?
Jerry: Security!

Joe: What are you gonna do on your honeymoon?
Jerry: We’ve been discussing that. He wants to go to the Riviera but I kinda lean towards Niagara Falls.

Just as everyone seems to be headed toward a weird, altered state of bliss, Spats shows up and the action starts again. Our heroes and heroine barely escape, and we are treated to the most famous one-liner ending in comedy history (I won’t spoil it in case you haven’t seen it).

A moment to appreciate Billy Wilder

Billy Wilder is 95 years old and one of the last of Hollywood’s golden-era directors. He is respected and loved by his entertainment peers. Receiving Oscar nominations eleven times for writing and eight times for directing, he eventually won three as a writer and one as a director. He was also the 1988 winner of the Irving Thalberg award (the award for "creative producers whose bodies of work reflect a consistently high quality of motion-picture production"). Prolific as a writer, he penned 65 films. More important, he directed 26 movies, including dazzling comedies like The Seven Year Itch, Sabrina, and The Apartment and powerful dramas such as Double Indemnity, Sunset Boulevard, and Lost Weekend. Even today, his dramas hold up as powerful statements of the human condition, and his comedies still sound sophisticated and very funny. As a matter of fact, the members of the American Film Institute picked Some Like It Hot as the funniest American film of all time. What was his secret? 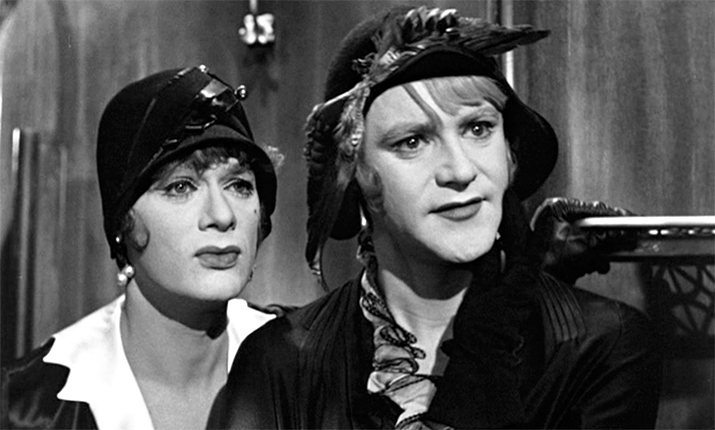 The normal critic’s response is that Billy Wilder had a sardonic wit, a fashionably cynical outlook, and a keen eye for Americanisms. My take is a little different. I think he filmed an astonishing set of characters (especially women) in a way that got rid of the superfluous and mannered extras so many directors throw in for art’s sake.

Billy Wilder kept a poster on his office wall for most of his professional life. It said, "What would Lubitsch do?" Wilder had started off as a writer for Ernst Lubitsch, a German director from the early part of the last century who is, still to this day, considered the gold standard for Hollywood comedy directors. Wilder sought to emulate his mentor. So what would Lubitsch do? The answer is provided in this quote from Jeanette McDonald at Lubitsch’s funeral in 1948. "To me, great people are always simple, and Ernst was the simplest man I ever knew. He had no flaw in his greatness, no chichi, nor false vanity. On the set, he had a greatness of his art, but no 'artiness'." Wilder set a higher goal than "artiness." "The Wilder message is don’t bore," he said. And he didn’t.

And what about that cast?

In one movie, Tony Curtis starts as a Lothario, becomes a woman, adopts a Cary Grant talking style to complement his sexually repressed millionaire, and ends up a good-old Joe. He handles it all with aplomb and would probably be more lauded for his role had he not had to share the screen with Marilyn Monroe and Jack Lemmon. 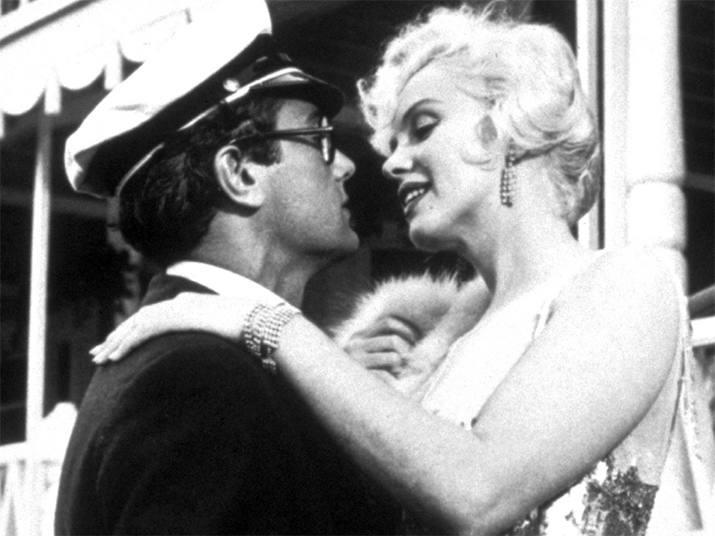 Marilyn was stoned, depressed, and pregnant while she was working on Some Like It Hot. One five-second long shot in chapter 14 had a dejected Sugar looking through Daphne’s clothes drawer for the douche bag/hot water bottle where they hid their whiskey. Her line was "Where’s the Bourbon?" She got it wrong over and over. Wilder finally taped the line in a drawer so she could read it. She couldn’t find which drawer had the line. Wilder taped it in all the drawers. After 59 takes (!), she got it right. I tell you this story because if you didn’t know it, you would have absolutely no evidence from the film that there was any problem with her. Wilder had already made The Seven Year Itch with Marilyn. AfterSome Like It Hot was released, a reporter asked Wilder if he wanted to make another film with her. He looked back and said, "I have discussed this with my doctor and my psychiatrist and they tell me I'm too old and too rich to go through this again." Despite the troubled life she was living and her famous undependability, Wilder coaxed a world-class performance from Marilyn. Her comic timing was perfect. Her persona was sexually hot, emotionally soft, and intellectually ditzy. She carried it off to perfection, and she was never more beautiful. If you want to know why men in the 1950s went weak in the knees over her, just go to chapter 7, 35:52-36:02 into the film, when she says, "Goodnight, Honey."

While Lemmon didn’t have the conventional Hollywood good looks that his two co-stars had, if you watch carefully, you’ll see him steal the show. Watch his mannerisms, facial expressions, and what he does with his hands. Listen to how he stretches his lines and goes from breathless to purring in a single sentence. In chapter 12, when he announces his engagement to Osgood Fielding III, he has some of the funniest lines in the movie. When first filmed, he was lying in the bed telling Josephine about the engagement. The preview audience laughed so loud they couldn’t hear the lines. Remember that Wilder started off as a writer. He wanted the words to be heard. Solution? Hand Lemmon some maracas to play with between lines to let the audience quiet down. Serendipitously, we also got one of the funniest scenes in American cinema. Try to imagine any other actor pulling off what Lemmon accomplished in this scene and you will understand just how good he was.

MGM versus the DVD

The folks at MGM decided to release Some Like It Hot in two different versions. The regular release has the movie and a trailer. For $10 more, you get the Special Edition, which includes a long interview by Leonard Maltin with Tony Curtis, who is hilarious and full of anecdotes. We also hear reminiscences by four of the lower-level cast members. Also included are a gallery of stills from the production, all the original press kits, and trailers from some of Wilder’s other films. I plumped for the Special Edition. It was worth the money when I heard Tony Curtis discussing the wardrobe people taking measurements on he and Marilyn. I won’t divulge it, but I promise that you’ll have a new understanding of Marilyn Monroe.

I wish I could tell you that MGM put as much attention into the mastering. I can’t believe that they didn’t expend the effort to make this an anamorphic widescreen release. As I look through MGM’s DVD catalog under the letter "S," I find such contemporary "classics" as Species II, Six-String Samurai, and Superstar all getting the anamorphic treatment. But when it comes to Some Like It Hot, a certifiable masterpiece, we get plain old letterboxing. Who makes these decisions? Otherwise, the picture is clean and clear black and white with no moiré effects. There is only slight edge enhancement and well-balanced sound.