There was a gap in The Criterion Collection Blu-ray express this month; no title for review arrived. But Naxos sent me their edition of this dynamic film, now out of print on Criterion DVD. Naxos’s presentation is very Criterion-like, while tackling an element of film often ignored by Criterion: the music. And, upsampled to 4K, the DVD images offer a very impressive picture.

The mid-1930s saw an artistic renaissance in Mexico. The country welcomed artistic expressions of solidarity, and attracted artists from all over the world. Swept up in this movement, the legendary American photographer Paul Strand moved to Mexico in 1933, and became friends with the Mexican composer Carlos Chávez. Together, they came up with the idea for a docudrama, Redes (1936), and hired a young Austrian-born director, Fred Zinnemann (1907-1997), to codirect with the even younger Emilio Gómez Muriel (1910-1985). Zinnemann eventually went on to Hollywood, where he won Oscars for directing From Here to Eternity (1953) and A Man for All Seasons (1966); Muriel enjoyed a distinguished career as a film director in his homeland, Mexico. 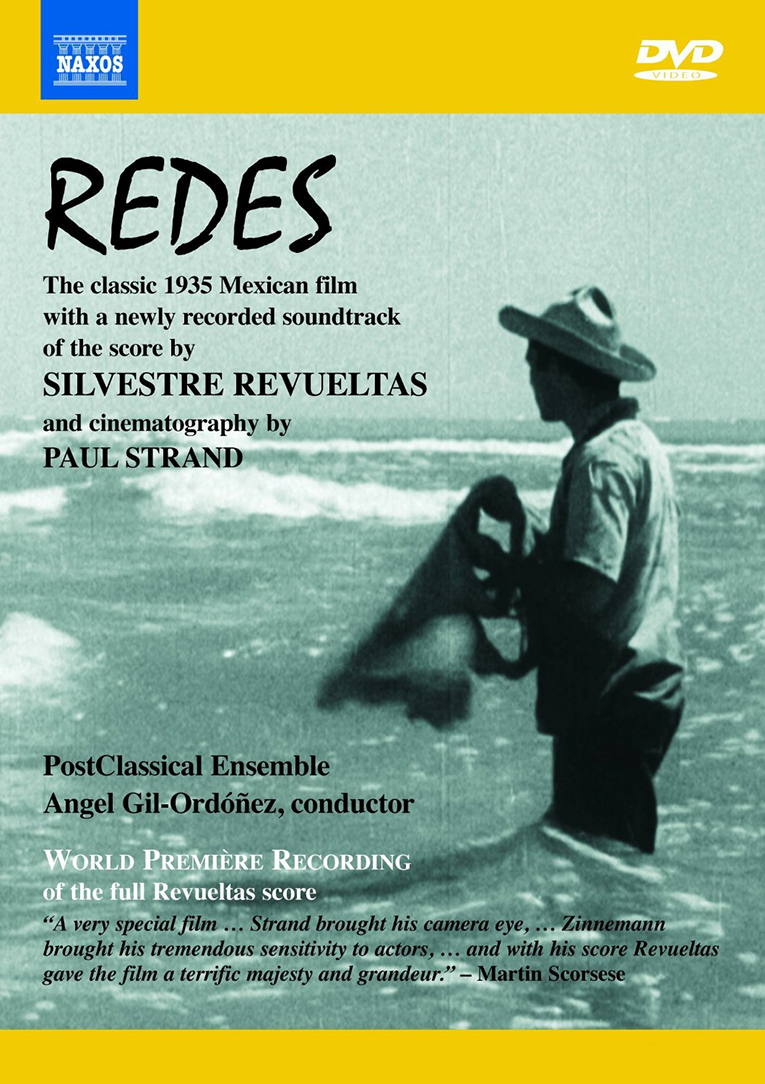 As Chávez and Strand were getting started on Redes, Chávez was replaced as Director of the Department of Fine Arts of Mexico by Antonio Castro Leal, who hired Silvestre Revueltas (1899-1940) to compose the film’s music. Redes was the first of Revueltas’s seven film scores, and his taking of the job drove a wedge between him and Chávez, who had expected to write the music himself. The eccentric Revueltas was a genius driven mad by alcohol. He succumbed to alcoholism and pneumonia in 1940, at the age of 40.

Redes is Spanish for nets, though the film was released in the US under the title The Wave. Cast mostly with non-actors, it tells the story of poor fishermen on the Gulf Coast of Mexico who are grossly underpaid for their efforts by a boss who keeps most of the profits for himself. As the film begins, one fisherman’s son dies because he can’t afford to buy medicine, and the boss refuses to advance it. Later, in a confrontation with the boss, another fisherman is killed; his death inspires the fishermen to rise up and demand fair payment. 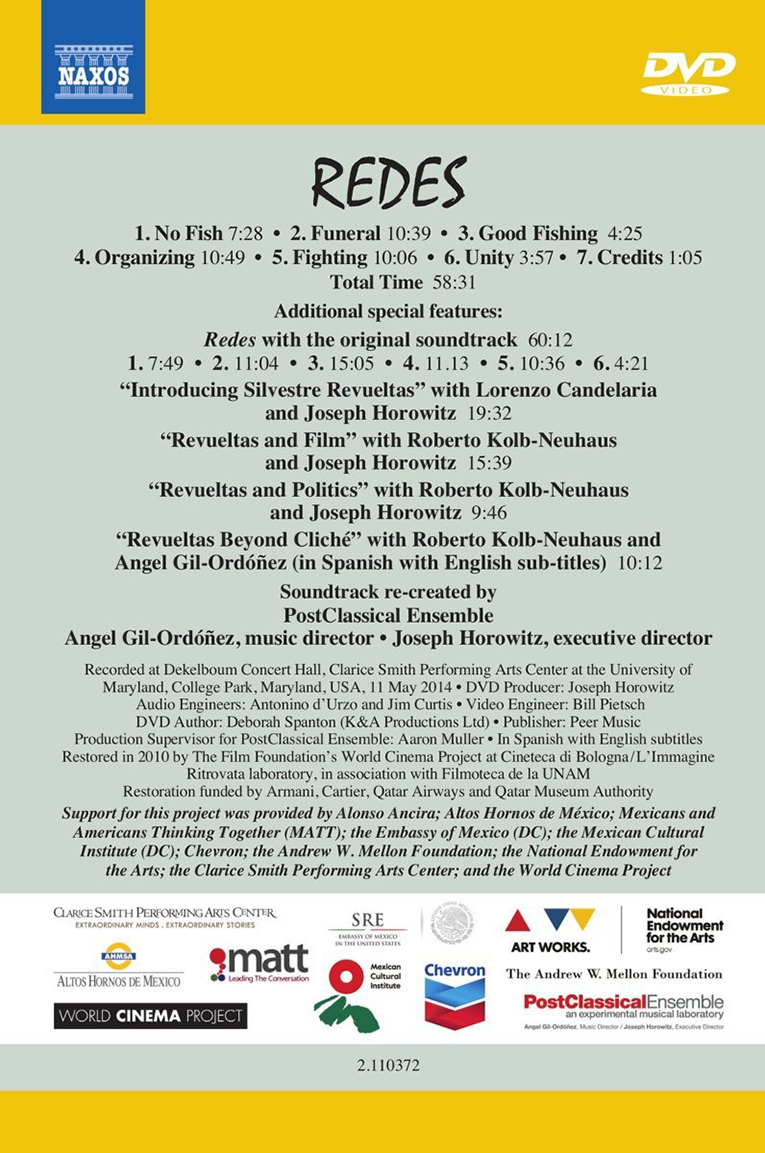 This edition of Redes is part of Naxos’s ongoing project to rerecord the film scores written by respected concert-hall composers. Already released are The River and The Plow that Broke the Plains, both scored by Virgil Thomson; and The City, with music by Aaron Copland. The scores are performed by the PostClassical Ensemble, a medium-size chamber orchestra founded in 2002 and conducted by Angel Gil-Ordóñez, and recorded at the University of Maryland. The performances are alert and passionate; the recorded sound was the state of the art for the 1920s.

The video is not quite on a par with the soundtrack. Though onscreen credits indicate that it’s been restored, there is still some minor noise, and a stripe that runs through the right-hand side of the screen. I’ve never seen the discontinued Criterion version, so don’t know if those problems were fixed in that release. I do know that only the Naxos version has the rerecorded soundtrack, and the music is glorious enough that it makes watching the DVD well worth the effort. From the opening, dramatic trumpet call, Revueltas wrote music that was passionate, alive, colorful, and sweeping. The Naxos release is available only on a DVD with a PCM stereo soundtrack, and it’s the only recording of the complete score in modern sound. (There are several recordings of a four-movement suite compiled by Erich Kleiber.) 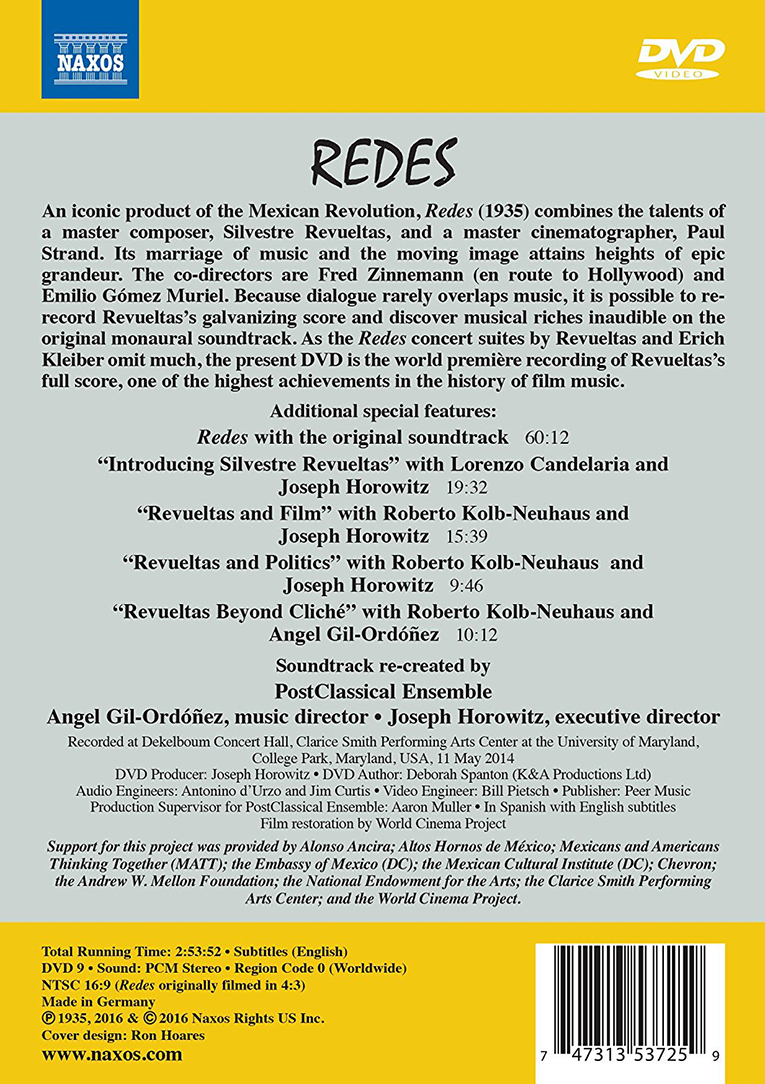 Extras include discussions of Revueltas with music producer and author Joseph Horowitz, music historian Lorenzo Candelaria, and Revueltas scholar Roberto Kolb Neuhaus. Though a bit dry, these are all immensely informative. Although the focus is on the music, the film’s story and cinematography are not ignored, and are covered well in the booklet notes.

Redes amazes with its experimental photography, and its depictions of social injustice tug at the heart. The fishing sequences are exciting and visually stimulating, and Revueltas’s thrilling music fully expands the actions and emotions playing out onscreen. If you’re looking for something memorable but off the beaten path, this might be just the ticket.

Be sure to watch for: The final sequence, in which the fishermen band together to form a flotilla that advances on the town where the rich, corrupt boss lives, is masterfully shot, edited, and scored, images and music building to a huge climax of a mighty wave -- figurative and literal -- crashing onto the shore. A powerful and unforgettable sequence.