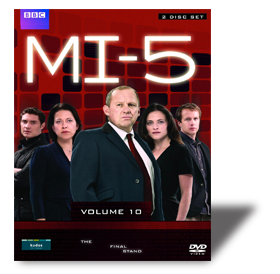 The Best Espionage Show on Television Has an Emotional Finish

MI-5 has ended its run with this six-episode season, which is one of the most emotional yet. This drama about an MI-5 team of operatives that protects the people of the United Kingdom from terrorists and the like remains taut to the end. It joins Homicide: Life on the Streets as one of the best gritty law-enforcement shows ever made. In fact, watching MI-5 on a large screen in a fully decked-out home theater doesn't even feel like watching television, because the show (known as Spooks in the UK) is almost entirely devoid of television's clichés.

MI-5 characters are likable and they stick with the viewer, but don't become too attached to them. On MI-5 anyone is expendable. Anyone, that is, except Sir Harry Pearce KBE (Peter Firth), who is the leader of the team from the beginning of the first season until the end of the tenth. Harry has denied himself almost all human feeling in his devotion to his country, and he's willing to go to any lengths to preserve its dignity and safety. At the beginning of Volume 10, Harry and Ruth Evershed (the marvelous Nicola Walker) are the only originals left. The producers want MI-5 agents to be in such jeopardy and considered such real people that there are no cast credits on each episode -- there's merely a montage of character images and the show's title.

In this season much of Harry's past surfaces when the team tries to protect Russian ambassadors who are building a relationship with the UK. Someone posing as Harry is sending messages and trying to break up the union. We learn that one of the Russians, Elena Gavrik (Alice Krige in a tour-de-force performance), is Harry's former lover and her son Sasha (Tom Weston-Jones) might actually be his. The excursions into Harry's past show why he is such an isolated man, but isolation is only one theme of the series; another is love's tendency to make a person act against his better judgment, borne out in Harry's sometimes careless actions.

As usual with this series, there are breathtaking chases, with the action followed in split screen and monitored on the office screens. There are many killings as well, some of them gruesome and many callous. Spooks is shown in the UK without commercial interruptions, so each episode seems to play straight through without the predictable US pause points to sell cars or promote reality shows. Certainly on the DVD they sustain uninterrupted suspense for nearly an hour. You won't find better nail-biting suspense in any movie out there.

For some reason the BBC has opted to release MI-5 only on DVD; there are no Blu-ray Disc sets. The show is deliberately shot to look gritty, with de-saturated color and handheld camera work, so if you have a player like the Oppo, which works wonders when upconverting DVDs, you won't be too disappointed. Many British TV productions use mere stereo, but even with just two channels the sound here is robust, with the music and sound effects pounding away with high energy. I fed the tracks through DTS Neo:6 processing, and the results were quite thrilling.

There are only two extras, and that's a cheat because there was surely more to say. One is a featurette on Harry Pearce, and the other lists the ten best moments from the show as picked by the cast and crew. Each entry offers a brief explanation for those who haven't seen the rest of the series. If you haven't seen it at all, however, I'd recommend you start at the beginning. The show is available through Netflix, and you can also view it on the Spooks website. But be warned: the show is surprisingly addictive. Prepare for a rush of adrenalin that won't wane until an episode ends.

Be sure to watch for: Chase scenes play a big part in most shows like MI-5. Episode 4 of the tenth season features the team trying to stop a terrorist from detonating himself in Trafalgar Square, and there's a breathless rush to locate him. Other shows have shot similar scenes, but not with such effective suspense.