The world is now so hyperconnected that only those of a certain age can recall a time when essentially any commercially released music was not available at our fingertips. The world still held untapped discoveries, and it was up to stalwart explorers like ethnomusicologist Alan Lomax to open our ears to unknown possibilities by bringing obscure artists into the light.

The Texas-born son of folklorist John Lomax, Alan had a blazing intellect and a blistering personality, and he alternately charmed and bulled his way through his 87 years. A forceful advocate for civil rights, Lomax played an important role in cementing the dominance of black music in American culture. In 1997, Bob Dylan publicly credited him with “unlocking the secrets” of lesser-known music from America and the United Kingdom, which included bringing Robert Johnson, Lead Belly, and Dylan’s early hero Woody Guthrie to the public’s attention. Lomax’s greatest achievement was collecting tens of thousands of recordings -- a number of them made on location with his father prior to World War II -- and organizing and annotating them so they could be made publicly available.

Fellow Texan Andy Biskin became the younger Lomax’s research assistant after graduating from Yale University in the mid-’70s, and his two years of employment have resurfaced 40 years later as a reminder of Lomax’s staying power.

By the ’70s, Lomax had become entrenched in his belief that the only authentic music in America was made on acoustic instruments before the advent of mass commercialization. He had no time for the harmonic advancements introduced by jazz musicians like Charlie Parker and John Coltrane, and no ear for amplified instruments. As a young clarinetist interested in progressive forms of expression, Biskin became increasingly disenchanted and eventually broke from his employer.

Which is not to imply that Biskin lost interest in older forms of music; he has continued to draw influence from composers like Charles Ives and Raymond Scott, and has recorded brilliant interpretations of Stephen Foster’s songs. As I wrote of Biskin in 2006, when I first encountered him: “He seeks to find the threads between old European folk music, early American song forms, and the contemporary avant-garde.” 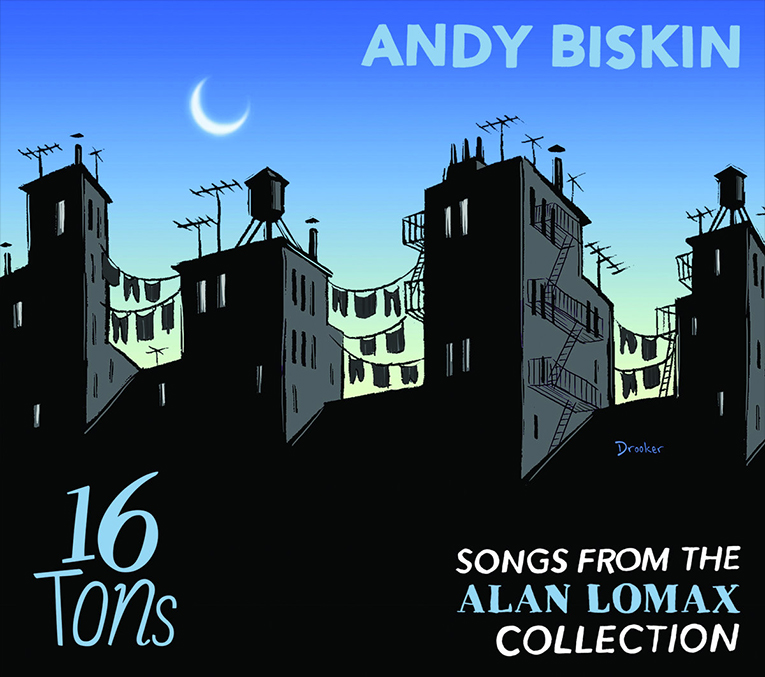 Perhaps it was delving into older source material like Foster’s mid-19th century canon that allowed Biskin to see past his former boss’s biases. In extensive liner notes to Songs from the Alan Lomax Collection he writes that he drifted back into Lomax’s orbit following his death in 2002, and was riveted by John Szwed’s 2010 biography, Alan Lomax: The Man Who Recorded the World, which opened new sides of Lomax’s life to him.

These forces, undoubtedly along with a natural mellowing of age, pushed Biskin to begin delving into Lomax’s The Folk Songs of North America, which Lomax published in 1960. The clarinetist propped the copy Lomax had given him on his music stand and began playing through some of the 317 compositions.

As he writes, he had no real plan of how to deal with the old music, and the piano transcriptions in Lomax’s book sent him to recordings of the songs for clues on how to voice the melodies.

“The working method I arrived at was to intercut the songs with my own melodies and short improvisations. Sometimes the words suggested a direction. Sometimes I incorporated multiple versions of a tune, or phrases from related songs. Sometimes I just let the melody speak for itself.”

In considering what kind of group he needed to perform the music, he decided to eschew vocals and use a choir of three trumpets. “I wanted an ensemble that could mimic the call and response of a vocal group, that could play both gently and brash, that could sound relaxed and ragged or as tight as a dance band.”

While it contains echoes of Leonard Bernstein’s interpretations of Aaron Copland, Bill Frisell’s Americana recordings, and Dave Douglas’s Be Still, Songs from the Alan Lomax Collection sounds little like anything that precedes it, and Biskin confirms that he wasn’t influenced by any other modern approaches to American folk music. 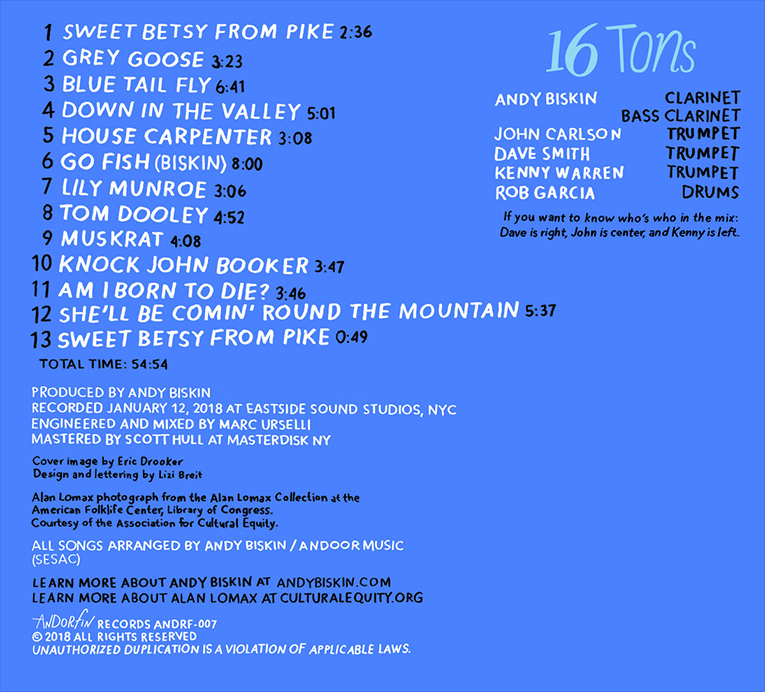 There is much of the puckish humor that appears in Biskin’s playing elsewhere, but what stands out here is the way he blends the trumpet voices on pieces like “Sweet Betsy from Pike” and “House Carpenter,” and creates dialogue between them on “Down in the Valley.” As he sets out in artistic statement of purpose, the horns pass the melodies and harmonic asides between them, Biskin’s sonorous bass clarinet contrasted against the brass trio. In solo passages, the trumpet voices of John Carlson, Dave Smith, and Kenny Warren are distinctive enough to stand apart from one another. This is most effective on the anthemic “Lily Munroe,” a song that has been repurposed as “Jack-A-Roe” by the Grateful Dead and as the stirring labor union theme, “Which Side Are You On?”

Biskin’s approach is open enough that he interpolates his own improvisations, emphasizes rhythmic movements, and injects other ideas, to the extent that some of the songs take on entirely new personalities. The most evident of these is “Tom Dooley,” whose root is a lament for a doomed prisoner. Here, the energetic drumming of Rob Garcia and raucous horn lines take their inspiration from both a 1929 rendition and the university campus hootenanny version popularized by The Kingston Trio 30 years later.

At the other end of the spectrum is “Am I Born to Die?,” an 1817 hymn whose four-part harmony is carried across two centuries, and sounds no less powerful for the journey. It is one of those songs, like Blind Willie Johnson’s “Dark Was the Night, Cold Was the Ground,” that strikes so close to the human condition that it is truly timeless. Biskin’s insight is keen enough that he recognizes it and retains its purity.

The overarching power of this set of songs is the familiarity of compositions like “Blue Tail Fly” (also known as “Jimmy Crack Corn”) and “She’ll Be Comin’ Round the Mountain,” and the freedom Biskin takes in his approach to them, utilizing what he’s learned from various recorded versions and his own history with them as favorites of his own family.

The sound, as captured by Marc Urselli at New York City’s Eastside Sound, is spacious and well separated, and the trumpet harmonies are particularly sweet sounding.

Would Lomax love this recording? Probably not. More likely he’d thunder that introducing contemporary elements and improvisational freedom into these old themes renders them inauthentic. But Biskin’s counterargument is here for all to judge its own merits, and those merits are rich. He need not apologize to Lomax’s ghost, should it rise from the mists like one of these treasured old compositions.