The Swingle Singers: "Weather to Fly" 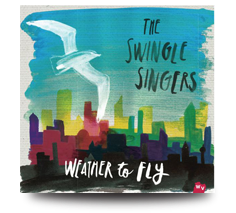 Can it be? The Swingle Singers are 50 years old, and Weather to Fly is their first 50th-anniversary album. It seems like only yesterday that the brainchild of Ward Swingle swept in from Paris and informed us that Bach and other Baroque composers could be successful with a hot-jazz treatment. The group has gone through a lot of personnel changes in their half century of existence. Ward Swingle left the group to form his own New Swingle Singers and is still alive, back in Paris after a stay in the United States, doing new arrangements and guest conducting.

Throughout most of its extensive history, the group has been composed of eight vocalists, singing a cappella or with only percussion and bass accompaniment. The current group performs almost entirely a cappella and is down to seven singers: three women and four men. Their names are Sara Brimer, Joanna Goldsmith-Eteson, Clare Wheeler, Oliver Griffiths, Christopher Jay, Kevin Fox, and Edward Randell.

Though at first it was their swinging interpretations of Bach that got the group noticed, they quickly migrated to other music and proved that just about anything can be swung. They have lately perfected beatbox music, which is a form where some of the singers imitate percussion sounds while the others sing over them. The opening number, Elbow's “Weather to Fly,” establishes the style right away with Christopher Jay's imitation of a shaker under the lead vocal. Various percussion sounds build consistently and most effectively. Almost all of the songs on Weather to Fly use beatbox style, but the one I found most exciting was "The Diva Aria" from the film The Fifth Element, which finds Sara Brimer's powerful coloratura soprano soaring over intense vocal percussion effects.

Astor Piazzolla's "Libertango" gets a similar treatment. There are also ear-popping versions of the Beatles' "Lady Madonna," Tears for Fears' "Woman in Chains," and an absolutely scintillating rendition of Beyoncé's "Single Ladies," appropriately re-titled as "Swingle Ladies." The overall mood of the set is breezy and light, so it seems quite OK that a bonus track is given over to an intense and dramatic performance of the more somber "Poor Wayfaring Stranger."

One could relegate the Swingle Singers to the novelty category, except for one obvious thing: all of the singers are consummate musicians who can soar with a lyrical line, giving impeccable attention to phrasing and expression. The recorded sound is rich and full, about what you'd hear live, since the group sings with microphones.

Happy 50th anniversary to a unique singing group that has maintained its high standards for five decades.

Be sure to listen to: The haunting, fluttering bell tones in "Nana." I can't recall ever hearing this effect more perfectly executed.