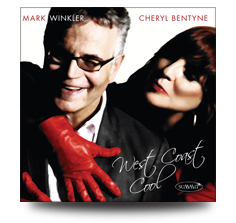 Cool Singing and Playing Bring Back an Era

This saucy, hip CD stems from a live concert that Cheryl Bentyne and Mark Winkler put together in 2010. Bentyne is a Grammy Award-winning singer from the Manhattan Transfer, and Winkler is a staple of West Coast jazz, both as singer and lyricist. Each is an appealing singer alone, but together they're downright irresistible. Not many jazz duos feature a match like this one.

There are several mash-up cuts on the CD, where two or more tunes work together. The opening track is a mix of Dave Brubeck's "Take 5" (lyrics by Lola Brubeck) and "Drinks on the Patio," a recent tune by Winkler and Rich Eames. Eames is the keyboard player for a terrifically talented quartet that serves on most of the album's songs. The other members are Tim Emmons on bass, Dave Tull on drums, and Bob Sheppard on saxophones and flute.

What is West Coast Cool? Look at the list of songwriters and composers and you'll know -- names like Neal Hefti, Bobby Troup, Steve Allen, Frank Loesser, Billy Barnes, Hugh Martin and Ralph Blane, Nat King Cole, and Alec Wilder. They personify '50s jazz from the west coast, creating music that was hip and cool but a little more laid-back than other jazz, hinting at the easy listening jazz that's so popular today.

The Brubeck/Winkler cut swings nicely, but I think the mash-up of "Route 66"; "Alright, Okay, You Win"; and "Straighten Up and Fly Right" is even better. Bentyne and Winkler really dig into this trio of songs and swing them up just right. They bestow the same energy and bounce to Steve Allen's "This Could Be the Start of Something Big." Each singer also gets some solo spots. Bentyne is very successful with the swaying rhythms of "An Occasional Man," and Winkler really catches the mood of "Let's Get Lost," with trumpet player Nolan Shaheed adding just the right amount of lazy haze.

The multi-talented Shaheed also engineered and mixed all but two of the CD's tracks at No Sound Studios in Pasadena, California. And those mixes are absolutely right all the way through. The instruments have presence but never obscure the vocals. There's a good spread that helps with clarity -- the two singers being slightly left (Winkler) and slightly right (Bentyne) of center. The bass line is focused, and the piano sound is exceptionally good.

If you're looking for some laid-back jazz that will take your mind back in time while your feet stay rooted in 2013, you need look no further than this CD, which features first-rate musicians paying tribute to the great songs and sounds of the '50s, making them sound, as promised, totally cool.

Be sure to listen to: "Cool," the last cut on the disc, was recorded at one of the live shows in Canada. At slightly past midpoint it features a bass solo from George Koller that, through the use of harmonics, takes the music into an upper range not usually associated with the bass. Koller makes it seem a simple task by doing it entirely in tune. Your jaw will drop.