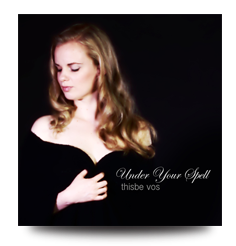 Vos was born in the Netherlands, but her first singing gig was with the British swing band the Jive Aces, who toured in Europe and the United States. She now seems to have settled on the west coast of America, where she recorded Under Your Spell at No Sound Studio in Pasadena, California. That gives her access to first-rate studio musicians, so her backing band is solid.

Vos cites her inspiration as Ella Fitzgerald, and you can hear that in her free and natural phrasing. She also reminds me a little of Peggy Lee, who co-wrote track seven, "He's a Tramp," used to such great effect in Walt Disney's Lady and the Tramp. But to my mind her actual vocal quality reminds me most of Doris Day, especially in sustained notes. That might come as a surprise to some who don't realize that before Day was a Hollywood star, she was a lead singer with several bands, including that of Les Brown. Moreover, Day has been quoted as saying that Ella was her primary influence. These are top-echelon comparisons to be sure, and ones that find Vos fitting in with no limitations.

Under Your Spell opens with "Shanghai Blues," a swinging Vos original that benefits from some saucy sideman licks from clarinetist Geoff Nudell. Nudell is one of the most featured players on the album. He plays, equally well, almost the entire clarinet family of instruments (regular, alto, bass, and contrabass -- only the E flat is missing), as well as flute and alto flute. The reedy instruments are an ideal contrast-complement to the singer's lovely voice. Vos swings "Shanghai Blues" in a jaunty, relaxed, yet precise manner. It was a good opening choice. Get listeners that far and they're going to want more.

The second cut, "Under Your Spell," is also a Vos composition, and it's a love song complete with Gordon Jenkins-like strings from the Pasadena String Ensemble and a warm and sensual sax solo from Carl Randall. Most of Vos's tunes are songs about love and romance, including "That's All Right with Me," "I Need You," "Just a Fool over You," and "Rue de la Huchette." The songs by other composers fit hand-in-glove: timeless classics such as "I Thought About You," "Round Midnight," and Irving Berlin's "Always."

The recorded sound is warm, and it has good presence, impressive clarity, and a well-defined bass line. It seems ideal for the performers, and that's the greatest compliment I can give to Nolan Shaheed, who did the recording, mastering, and mixing. The stereo spread is wide, without stranding anyone outside the group, and there's a bit of stage depth, too.

Taken as a whole -- performance and recording -- this is one of the best albums I've heard all year. Thisbe Vos is a name you'll remember, not just because it's exotic, but because it reminds you of music making at the highest level.

Be sure to listen to: In "Round Midnight," Vos carefully colors the words in a very subtle and unfussy way, with details like a tiny hesitation before the word "bad" to give it emphasis. Her version of this well-worn classic carries more meaning than most.